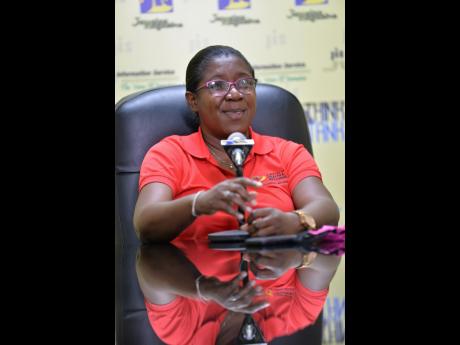 Dr Alisha Rob-Allen says there needs to do more in the HIV prevention campaign than a message about condom use. She says persons need to be able to make informed decisions about their sexual practices. There is also the call for organisations to come on board to aid with funding of the well-needed campaigns.

'HIV has not gone anywhere'

DR ALISHA Robb-Allen, acting senior director of the Ministry of Health and Wellness' HIV/STI Unit, says that young people and communities must be empowered to make responsible sexual choices, even while admitting that the ministry has fallen short in delivering its message of HIV prevention.

Robb-Allen was speaking at a Gleaner Editors' Forum hosted ahead of this year's celebration of World AIDS Day on December 1, which will be observed under the theme 'Ending the HIV Epidemic: Equitable Access, Everyone's Voice'.

“I think there has to be a wider conversation on prevention, and not just about condom use. We have to look at wider sexual practices and we have to enable and empower our youth to be able to make informed decisions,” said Robb-Allen.“They do have the health and family-life education that has started within our schools, but that has to be done on a more tangible and wide-based setting, in terms of going to the community.”

Robb-Allen acknowledged that public education on HIV took a back seat in 2017 with the implementation of the World Health Organization's Treat All policy, which recommends antiretroviral therapy for all HIV-positive persons immediately after they have have been diagnosed with the virus.

Kandasi Levermore, executive director of Jamaica AIDS Support for Life, agreed that there has not been as much focus on HIV awareness campaigns in recent years.

“There used to be way more players in the HIV response, more organisations at the community level, and other non-government organisations were active. With the drying up or streamlining of the donor funding, a lot of persons have really closed their whole voice to it, but HIV has not gone anywhere, and we need to still be having the conversations as if we were in the early 2000s,” said Levermore. “We have to engage way more players to be there with us, and we have to use up the social media.”

Some $653 million is slated to be spent on a project titled 'Support to the Nation HIV/AIDS Response in Jamaica' during the 2021-22 fiscal year to be financed by the Government and the Global Fund, which will include HIV prevention programmes for 16,981 female sex workers and 20,087 men who have sex with men. This follows the expenditure of some US$17.8 million (J$2.7 billion) from public, private, and international funding sources between 2016 and 2017, according to the Jamaica Global AIDS Monitoring Report 2019.

Meanwhile, Levermore called for more men to get on board with building HIV awareness at the community level, to combat prevailing falsehoods such as the myth that sex with a virgin can cure the disease.

“If we continue to propel these myths, then that continues to put especially the young person, who needs to navigate these experiences, at risk of contracting HIV,” said Levermore. “In the HIV sector, we always say, 'Where are the men in the response?' We need more men to be vocal on spreading the awareness, to say these things are not true, and to show that real manliness is a man taking responsibility and doing the right thing.”