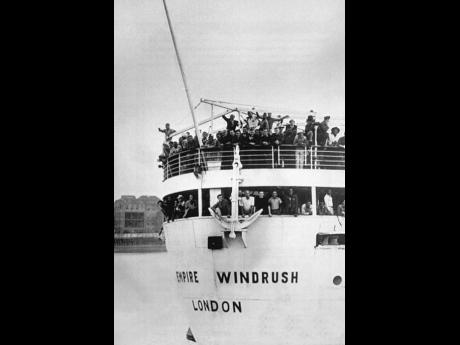 Scores of Jamaicans went aboard the Empire Windrush in search of opportunities in England. Some of the travellers were disappointed with a refugee reference in a newspaper article, as they said they had intended to return home at some point.

West Indians arrive in UK in search of jobs

‘What do British people think of our coming here?’

LONDON, June 22 – Under grey skies, and borne on the broad bosom of London’s river, 400 West Indians entered a new world today – though their new world was the old world of the history books.

As I watched, the troopship Empire Windrush, with West Indians crowding the rails, edging into the Tilbury quayside at seven o’clock this morning, I thought of all the voyagers who had sailed from Britain across the Atlantic in search of fortune.

LONDON, June 22 –Luckiest West Indian on board the Empire Windrush was 25-year-old Averill Wauchope, a dressmaker from Kingston, who was one of six stowaways on board.

When discovered a week out of Kingston, she was befriended by Nancy Cunard, heiress of the Cunard fortunes, and Mortimer Martin, bottling manager, who was a passenger, organised a subscription which costed £50 for her fare and left £6 for her expenses on arrival here.

Five stowaways are expected to be prosecuted in the Tilbury Police Court. Two others were put off at Bermuda.

Chief Dispenser To Retire from Service

Egbert B. Bryce, chief dispenser at the Kingston Public Hospital, has gone on 6 months leave of absence prior to retiring from the Government Medical Service.

Bryce has been in the service for over 30 years. He was trained at the Kingston Public Hospital by the late Mr R.N. Gordon.

None of the West Indian boys in search of jobs seemed to feel any touch of romance on the crowded deck of the Empire Windrush.

I found them surprisingly matter-of-fact, and prepared to take everything as it came.

Even their natural curiosity in the Thames, and the shipping, and the smoke of London in the distance, had begun to wear off since their 14,000 ton ship anchored in the stream last night. It required a sight of the morning papers with the printed references to their arrival before they began to talk and evinced any marked interest in themselves.

Then the question was: “What do the British people think of our coming here?” My reassuring replies were taken quietly, cautiously – and sensible well-informed comments on the housing shortage here, and the prospects of jobs, showed that they realised that the going at first might be tough.

The arrival, biggest wave so far of an emigration in reverse by coloured British subjects from the singers, students, pianists and a complete swing band (Delroy Stephens and his 'Commandos' from Jamaica), as well as former Royal Air Force (RAF) men.

As the men queued up for breakfast, each with a large mug in his hand, a regiment of Ministry of Labour and Colonial officials were boarding the ship and setting up temporary offices in the public rooms.

The smoking room was set aside for a dozen officials specially to attend to the job-seeking West Indians. A preliminary check-up had revealed that 204 had friends to go to in this country, and they were supplied with free railway warrants and 10 shillings in cash for travelling expenses. Rumours on the ship of 24 for each man proved false.

Another 52 volunteers for the Services – 41 for the RAF and 11 for the army – were standing by to go to Wimpole Street Hostel, where they will be medically examined and take the education tests. I have every reason to believe that all but very few of these volunteers will be accepted for the Services.

The remaining 236 men were then taken to Clapham deep shelters this afternoon, and they were already being instructed about form-filling for registration for jobs. At Clapham, all the men will be interviewed individually by the Ministry of Labour and Colonial Office officials.

From Fit/Lieut Smythe, RAF Liaison Officer, who travelled on the Empire Windrush, I learned that the voyage had been quiet and comfortable and the men were very well behaved. “Apart from a few minor troubles,” he told me, “we had nothing to worry about.” He added that this was all the more commendable, considering that military discipline of the troopship was new to many of the West Indian civilians.

What Symthe meant by military discipline on the Empire Windrush was evidenced this morning when instructions kept coming over the ship’s loudspeaker system, phrased in parade ground terms. The West Indian job-seekers took this as they seemed to take everything else – as a matter of course.

From James Wentworth, 37 Love Street, Jones Town, and Henry Lawrence, Lucea, Hanover, I had confirmation of the good food on board and the pleasant voyage. Wentworth and Lawrence, who is a carpenter by trade, were going in to Clapham Centre and were optimistic in regard to jobs.

Another Jamaican, who cautiously asked to be anonymous, was trained as a motor mechanic after his RAF service, and has returned herewith the same resolve as many of the others: “I want work, and I am prepared to work hard”.

As I talked to the job-seekers, an RAF information van on the dockside was sending out cheerful martial music through loudspeakers.

Two Jamaicans to whom I spoke remarked on the term 'refugees' used in a newspaper report of their arrival in the Thames. Alphus Campbell, motor fitter from Westmoreland, asked what it meant, and added, “We are not refugees from Jamaica. We have come here, but many of us plan to go back one day – when, we don’t know.” His friend, Sydney Sang, a former RAF man and welder from Kingston, agreed with him.

“Refugee is wrong," he said. “In the industrial sense, the mother country can offer us much, and we are British.”

Colonial welfare officials did a good job on the ship, and Ivor Cummings gave the men a pep talk last night. He was ready with advice and encouragement on the ship today.

The gist of Cummings’ talk was that things would not be too easy. Several Jamaicans were inclined to be critical of the Colonial Office until they were told that the first news of their arrival only reached here a fortnight ago. Then there were remarks such as “it shows how much our Government cares for us”.

Accommodation at Wimpole Street Hostel will cost the Service volunteers one guinea a day for bed and breakfast, and they will have to pay for other meals out.

At the Clapham deep shelter, which is run on military lines, the cost of a bed is two shillings a night.

Cummings told the men that he hoped they would only have a brief stay there – not more than one week.

By 4 o’clock this afternoon, under rainy skies, and cold for June, the Clapham contingent numbering 236 had reached the deep shelter site in coaches and were being given a square meal.

I learn that the majority of the men arrived here with some money and a few had as much as one year’s service savings. In a few cases, however, free spending during the ship’s extended stay at Bermuda, and gambling on board, exhausted their meagre funds.

For these few, the English skies will be greyer before the sun begins to shine again.