Air passengers to benefit from commercial flights from New York 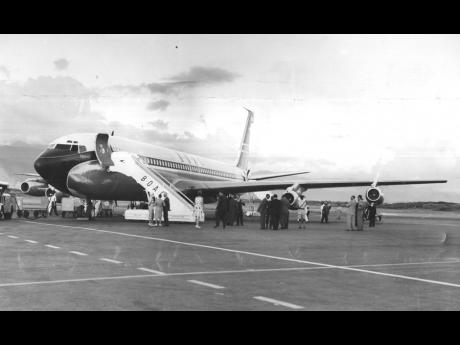 Several persons gathered to watch the arrival of the first flight from the BOAC's jet from New York. The BOAC sales manager shared that this was the beginning of great plans and partnerships with Jamaica.

At 5:25 p.m. yesterday, a large jetliner dropped out of the sky over Kingston Harbour, circled the Palisadoes Airport twice, and then landed and taxied up the tarmac. This marked the inauguration of BOAC’s jet service between Kingston and New York and the commencement of commercial flights to Kingston.

The Rolls-Royce-powered four-engine Boeing 707 landed at Palisadoes Airport four hours and 20 minutes after leaving New York, with stops in Nassau and Montego Bay.

On board, the sleek, silver-painted aircraft were 181 passengers, some of whom had travelled only from Montego Bay.

At the airport, the Mayor, Councillor Frank Spaulding, Sir Robert Barker, Custos of Kingston, and Hon Abe Issa, Chairman of the Jamaica Tourist Board, headed a welcome group. Hundreds of persons, some curious spectators, others, meeting people on the aircraft, thronged the terminal building and other vantage points to see the jetliner.

Captain John Woodman, who piloted the aircraft, said the flight down was a pleasant one. The aircraft, he said, had a maximum seating capacity of 173 and cruised at a speed of 600 m.p.h.

Captain Woodman said that although he was not born in Jamaica, he lived for several years in Mandeville and attended Munro College. In 1934, he left Jamaica for England and started flying. To date, he has flown 16,000 miles and has been flying jets for the past five months. His last visit to Jamaica was in 1955.

The Director of Civil Aviation, Mr K. Paton Jones, said the B.O.A.C, jet flight to Kingston has brought about plans that his department has been making for the past four years. The new terminal building at Palisadoes, which he said will be completed in the spring of 1981, has facilities designed to handle four or five aircraft of the Boeing 707 type at a time as well as other types.

Mr William Hardy, BOAC Sales Manager, commenting on the inaugural flight, said it had always been BOAC’s intention to operate the best possible equipment and frequency to Jamaica. And he said the arrival of the Rolls-Royce-powered 707 jetliner at Montego Bay and Kingston yesterday on a regular service was the culmination of BOAC’s plans for this area. The service he said has commenced as a weekly one to New York, building up to a daily service by December to cater for the increasing tourist traffic demand. The aircraft he said offers one of the fastest flights from New York to Jamaica with a flight time of 3 hours and 30 minutes.

Mr Clinton Alexander, Manager of the Palisadoes Airport, saw the flight as a historical moment for Jamaica, and he looked forward to the day when other airlines would be able to provide a similar service.

Hon. Abe Issa said he wished to congratulate BOAC on starting the service. The Tourist Industry here he said was largely dependent on air traffic, and service of that type would be a boon to the industry. In particular, Mr Issa said that the tourist traffic to the capital city was likely to increase, and in the near future, more accommodation would have to be provided in Kingston.

The flight to Jamaica in the words of the Chief Steward Mr Ronald Evans was “comfortable and fast”. He has been with BOAC for the past ten years and has been on the 707 since BOAC started using them. The aircraft he said carries a crew of ten, four technical and six cabins. It has a wing span of 160 ft.

Miss Cordella Chang, a Jamaican who returned to the island by jetliner after a six-month holiday in the United States, said the flight was very smooth. The service on the aircraft was excellent.

Today at 9:00 a.m., twenty-five persons will leave the Palisadoes for New York by the jetliner on a five-day junket given by BOAC. Leaving will be representatives of the Government, the Jamaica Tourist Board, hotels and travel agencies, and the press and radio.