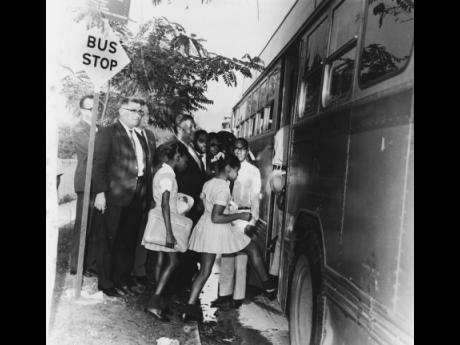 Pupils of schools in the Corporate Area boarding the first of six buses starting the Experimental School Bus Service on September 21, 1970. Seeing the children off are the Hon Wilton Hill, minister of public utilities and housing (centre), and (from left) T.A. Harrison, JOS traffic manager; Milton Rodriques, chairman of, the Corporate Area’s Public Passenger Transport Board; John Clymo, JOS managing director; ME.A. Levy, principal assistant secretary, Ministry of Housing and Public Utilities; Pauline King, assistant secretary in the Ministry of Housing and Public Utilities; a JOS inspector and a driver.

Students are now able to travel in comfort to school, courtesy of a new school bus service implemented by the Jamaica Omnibus Service (JOS). It was a welcomed initiative by parents, students and teachers. The expansion of the service was dependent on the success of the experiment.

The first bus left Bronte Way Corner at 7:15 a.m., a second at 7:38 a.m., then resumed in the afternoon. Hill said that one advantage the pupils will have is that there will be no need to change buses as, formerly, some pupils might have had to change up to three buses; changes which were not only inconvenient but costly in time.

He said that another obvious improvement would be the travelling atmosphere – students travelling together and not having to jostle with adults.

Special School Bus Service stop signs are positioned at intervals along the routes. Each bus yesterday morning carried an inspector, a driver and a conductor. Bus crews for the service are specially selected on the basis of the experience gained from the number of schoolchildren they previously have had to deal with on their various routes. In addition, they are given special briefings prior to their new assignment.

Each child carries a pass (identity card.) This pass bears the name of the child, the school the child attends, the boarding point and time of departure. The pass also shows the school bus number and a serial number. On the back of the passes, the following is written. “This identification card allows the holder to travel on special Bus Service in both directions at normal children's fare between the boarding point and the school specified. The holder must travel on the bus showing the number indicated on the front of this card.”

Passes for teachers had been considered and schools were contacted for a submission for request for passes. So far, only Whitfield Town has responded.

Some parents asked when the service would be covering other areas. Hill said the service was essentially experimental but, after operating for some time, was found satisfactory and “a proper expanded system” would be worked out with the ministry the JOS and the Public Passenger Transport Board.

He said that new identity cards could be obtained if the present ones were lost.

But some schoolchildren did not have their passes with them and the experimental buses did not take these children.

Yesterday afternoon, T.A. Harrison said the operational hours depend on the schools’ hours.

He said that the first bus leaves Duhaney Park at 7:15 a.m. while two other buses leave this spot at later times during the morning to fit in with the opening hours of the schools they serve. This is the principle on which the afternoon hours of operation are also based. Thus, the hours are staggered.

Harrison, however, pointed out that the buses did not carry all the passengers they had expected.

“A good idea” was Ronald Morris' view of the experimental service. Ronald is a Grade Nine student of the Norman Manley Junior Secondary School. Another student of the school, Gregory Walters, said “It is better for us to reach school.”