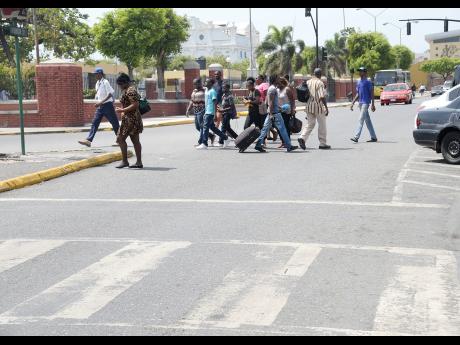 Jermaine Barnaby
People chose to ignore this pedestrian crossing as they crossed on Church Street in downtown Kingston.

It seems like we've got so used to doing things wrong on our roads in Jamaica, we've either forgotten how to do them right, or we just don't care anymore.

Driving to work in traffic on Thursday, I get to an intersection. There were quite a few cars in front of me including a big ol' JUTC bus. So though we had the green light, we weren't exactly flying. So by the time the light turns amber, the driver directly before me is still on our side of the intersection. From experience at that light, I know that if I push out any further, the light will turn red, and both of us will be stuck in the intersection. So I don't move. Of course, you know the buffoon behind me in a gold Toyota Prado is honking away that 'mi shoulda drive up di car'.

Obviously, this jackass didn't read the road code book because he would then know I would have been committing an offence. One for which I could be fined and I'm pretty certain he would not have been willing to lend me a few dollars to pay it. Yuh think mi can tell di judge di bredda behind me did a blow so that's why mi break the law? Go to hell, Prado man! And don't think I didn't spot a particular sticker on the windshield! A not even fi yuh vehicle yuh a drive, clown!

Another example from another day. I'm at a pedestrian crossing and the people, in fairness, were crossing slowly (as two persons are about to exit, another three step on to it). But they were crossing nonetheless. So, by law, mi not supposed to move. Of course, here comes a dumbass creeping up on my left, ready to lick dung di lady and her child who were crossing at the time. After they have safely (thank God) exited the crossing, I start moving. Mr Man to my left is gesturing as if to ask 'a now yuh waan move?' Again, what exactly was I supposed to do? Sigh.

And look, it's not just the drivers. The pedestrians have been getting it wrong for years as well. While some saunter across the pedestrian crossing like dem a moggle, others just start crossing on the spur of the moment. No looking right, left or anything, dem jus' step dung! Ever hear about always walk so you can face the oncoming traffic? Good luck finding those who still do that. I've seen persons pass a pedestrian crossing (one that has a traffic light to boot), go further up the road and then try to cross in the middle of the main road. Does that make any sense whatsoever?

I'm telling you, we've been doing the wrong thing so long, the right things now look strange. And it's not for lack of trying from the traffic authorities. I've seen the commercials and ads. People just unruly. Well, to all a unnu, if you think I'm moving slouchy, overtake, or call police. I'm done talking!

Drive with me at daviot.kelly@gleanerjm.com