It takes two: Flowing to success 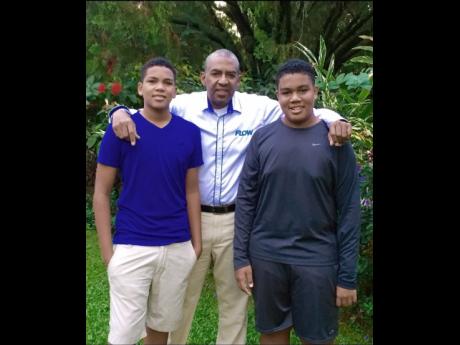 Dwight Williams and his sons, Dylan (left) and Dwight Jr. 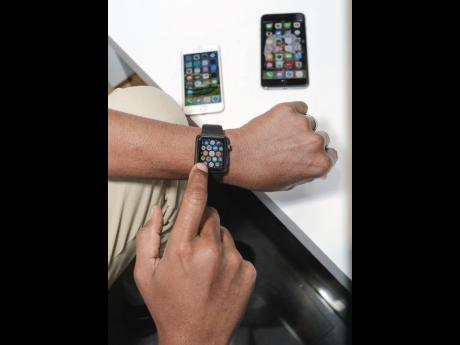 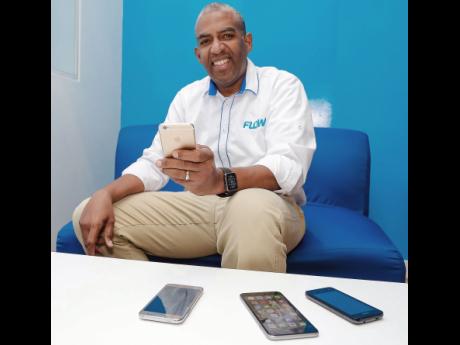 Contributed
Dwight Williams, FLOW’s head of products – Internet, fixed line, mobile and bundles – is the man in charge of the amazing handsets made available to consumers along with the super-sweet deals. Pictured here is Williams with the new iPhone 6S, 6S Plus, Samsung J5 and the Huawei Y360.
1
2
3

They say it takes two to tango, but in the corporate world, sometimes, it takes two to effectively get the job done. This week, we highlight a dynamic duo who, through passion, dedication and sheer determination, has been giving it their all, with their rewards flowing them right into corporate success.

Flair sat down and had a heart-to-heart with FLOW's Dwight Williams and Troy Cockings to unearth the men behind the company's suite of products.

Head of Product (Internet, fixed line mobile and bundles) Dwight Williams not only exudes wit, but he is confident and passionate about his career. One would ever imagine that once upon a time, he could not envision his future as a bright one.

Off to a rocky start while he attended Wolmer's Boys' School, Williams highlighted that despite his academic shortcomings, his mother, Hope, and father, Donald, believed in him. "I was not the model student. As a matter of fact, if you looked at how I performed in high school, you would never think I would be where I am today. But my parents always pushed me, never gave up on me and always made me try again. For that, I am eternally grateful to them," he confessed.

He realised his full potential while working as a bank teller after attending sixth form.

"I said to myself, if I wanted to reach my goals, I had to go back to school. I got the opportunity, enrolled in college, and I've never looked back since."

From there, Williams' dream soared to new heights as he anticipated landing in the corporate world. However, what he didn't anticipate was a specialisation in telecommunications, a shift he welcomed with open arms, asserting that he wasn't afraid to flow wherever life took him.

Joining FLOW, then Cable & Wireless, as a business analyst in the finance and planning team in 2004 was definitely a walk to remember. He described it as gruelling but an excellent platform from which to start.

He told FLAIR, "I was able to understand the numbers in order to support all the commercial leads, carry out variant analysis, month-end closing and monthly operating reports."

Not having a huge team meant longer working hours, which leads to family time being sacrificed. Luckily, Williams' family unit consisted of a supportive wife and understanding children.

"I would work long hours in the week, but weekends were always for my family. And to squeeze in some extra time, I would drop my sons off to school and capitalise on that bonding time. After a while, they understood that Daddy had to do what he had to do to provide for the family," he stated.

During his career, Williams smoothly transitioned from finance into product management and development, which he says was as a result of his love for technology. One of his ultimate goals was to increase access, especially in mobile television, and drive it home with his consumers, a mission which he not only accepted, but accomplished between 2004 and 2006.

At FLOW, he aspires to provide Jamaicans with access to the Internet, not as a luxury, but as a learning tool that's affordable. With this in mind, he was actively involved in lowering prices, implementing new and innovative service plans, such as new Triple and Quad Play bundles and other Christmas products offerings paired with the latest devices and how to access them.

In the workplace, Williams is driven by solutions and not deterred by problems. He is keen on building relationships with everyone in the company, their level, remaining humble, and attributing credit where it is due. As a result, he has built a team around him that works seamlessly to achieve the objectives of the business.

"I could not ask for a better team. Marcia Nelson, Adrienne Reynolds, Kevin Garvey, Sophia Dixon and Keisha Miller all play an integral role in our day to day operations. Whatever I ask of them, they deliver. I'm not the perfect boss, but I try to be fair at all times," he stated.

Continuing to be motivated by his parents and his beautiful wife, Dianne, to whom he has been married for 16 years, he says what really drives him is proving people wrong.

"If you want to see me click, tell me that I can't do something. Proving people wrong gets me going," he shared.

Being driven at work is directly attributed to the fact that he wants his family to be comfortable and secure. He pointed out, too, that he hopes to be a good example and a role model to his three children - Dylan, Dwight Jr and Danica. He recalled earlier this year when his 16-year-old son, Dylan, posted a picture of them on his Instagram page with the caption 'role model'. Beaming with joy, Williams stated, "Let me tell you something, that made my week!"

His advice to anyone wanting to be a part of product development was quite simple: "You have to love the industry you're in. Once you get joy from customers seeing your product, and you give it your all by working hard and never giving up, then the only way to go is up," he ended.