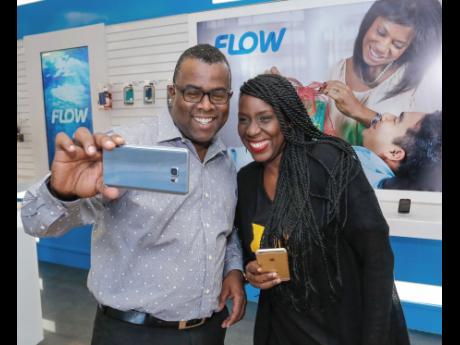 Contributed
Troy Cockings, the head of products (support), shows o-access blogger Odessa Chambers the perks of the Samsung Note 5 despite Chambers being an Apple lover. 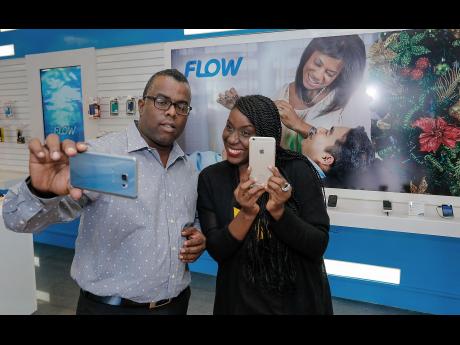 Contributed
With her heart set on purchasing the iPhone 6S, o-access blogger Odessa Chambers takes the time out to try out the camera features of the Samsung Note 5 being shown to her by Troy Cockings, Flow’s head of products (support).
1
2

Head of Products (support) Troy Cockings, who has experience in not only technical support, but also in production, started out from humble beginnings in the small community of Goodwill, St James. Cockings charted his course to success, climbing the business ladder after working hard and staying focused, all the while remaining positive as he rose from the bottom to triumph in his field of expertise.

He described growing up as a rough experience. "I lived with my grandmother from age one to age 13. Things were difficult because my mother was away working and we didn't always have it, so in order to make money, there was a point in my life that I sold fruits and produce in the town of Montego Bay. On Saturdays, I would take the bus, head into town and make that happen."

A highlight of his earlier years came when he became one out of 10 students to pass Common Entrance from Goodwill All Age School. A feat so great, back in the day that his name actually appeared in The Gleaner.

At 14 years old, he went to live with his mother, and by fourth form, he graduated from the streets to work in a supermarket, packing shelves and bags. He left Herbert Morrison Technical High school in 1990 passing three subjects - technical drawing, mechanical engineering and electrical installation. With these as his foundation, he had high hopes of becoming an engineer.

After taking a year's sabbatical from school, he proceeded to take a pre-engineering course which led him to the Montego Bay Community College, then Knox College. Armed with the necessary qualifications, he enrolled in the College of Arts Science and Technology (CAST), now University of Technology (UTech) and acquired a certificate in electronics and telecommunications. He faced even greater obstacles there when it came to finances.

"That was a personal struggle for me. It was so hard that I would pick up bottles around campus just to cash them in and purchase a meal. But it taught me humility," he revealed.

In 1996, he started as a technician in training at Telecommunications of Jamaica (previously Jamaica Telephone Company, and within three months he completed all six levels). By 1999, he was a senior technician, and it was within that year that his career in mobile telephone started.

When he joined the mobile switching office, he asked someone to show him the ropes, an encounter he described as unforgettable.

"I asked someone to teach me and he said, 'That's not how we do it here.' He gave me a three-inch folder and I read and read and read. I was introduced to reading in a different way, and that sparked my interest."

Shortly after, he was reassigned to Texas to learn about the Ericcsson mobile network, and became instrumental in the crossover from the analogue system to digital.

According to him, "That was life-changing. I had earned a respect from everyone, even from the same man who gave me the manual to read."

Junior executive in system administration would be the next post that he created a major impact.

"In 2004, our network had over 500,000 customers, but we did not have enough resources to manage them, so a colleague of mine and I examined C&W (Cable & Wireless) in Panama, which had the same amount and had no problem. We replicated the system, fixing the glitches," he stated.

Later that year, he applied for product management and was successful. Cockings looked at management in a serious way and decided to do a diploma in business management at the University of the West Indies, Mona School of Business. Currently, as the head of mobile product support at FLOW, he provides technical maintenance for products as well as tests, and manages all handsets.

"We support businesses as well as personal customers, and we offer support to the sales team."

Challenging himself academically, he pursued an MBA in business and graduated in 2009 with a major in international business. Graduating from UWI, he thought that after spending so much time studying, leaving it to do nothing felt unhealthy. So after seeing a post from his cousin seeking assistance with Alpha Boys' Home, he joined the teaching fraternity.

"I taught the principles of business and math, and eventually carried a few friends with me to help teach other subjects."

Year one, he taught one student and he passed. By year two, he offered knowledge to eight, seven sat the exam and passed. Today, he revealed, three are police officers, one is in the military, another teaches at Alpha and one is enrolled in university.

"That, to me, is personal achievement. I was a recipient of people's kind gestures growing up so I know what it felt like to have someone help you when you least expect it. Receiving assistance has sown a seed within me to give back."

His passion for assisting others led him to become a director of the Lime Foundation in 2012. And under his reign, they raised money from a 6K to build the Lime Foundation Paediatric Cancer Fund, in association with the Bustamante Hospital for Children, a fund he said is dear to his heart.

Cockings' life was not without pain and suffering as he also had a close call with death. One day, he felt a sharp pain under his left rib, which sent him to the doctor, resulting in various tests, after which it was revealed that he was diagnosed with pulmonary embolism. Luckily for him, it was detected early.

"That experience changed my view on life and taught me that you need to take time out to rest. After that, I made and still do today, make an extra effort to rest and spending time with his two sons who live overseas.

Inspired by the greats like Steve Jobs, Ghandi, Nelson Mandela and Martin Luther King, Cockings advises anyone with a dream to do the necessary research so that they can align their studies with what they want to pursue. His word of advice, "Set attainable goals and stick to them. I don't believe in being a part of anything and not make a positive contribution to it," he ended.