Kelly's World | Why can't we all just get along? 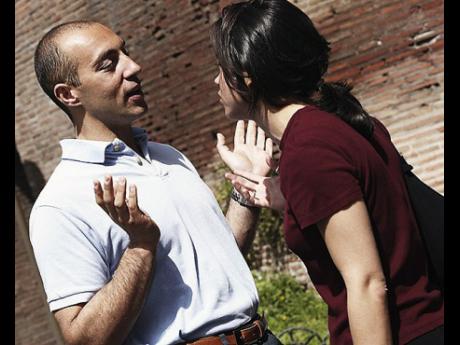 The crime statistics from 2016 showed that a number of murders committed in Jamaica were of a domestic nature.

I'm not talking about 'man-and-woman' argument alone. I mean that apart from gangs, many murders were the result of disputes between individuals that could easily have been squashed if everyone had just remained calm.

You see, therein lies the problem. If two people get into an argument, it needs both of them to quell the dispute. If only one of the aggrieved individuals is trying to negotiate a compromise, it really isn't going to work.

A soft answer turneth away wrath, but only if the other person isn't such a caveman that they can't be reasoned with.

Better yet, if you just try walking away from said individual, they may consider it disrespectful, that you 'diss' dem while they were talking to you.

All the walker is really trying to do is make sure there are no issues. But some people just don't see things so rationally.

One day while walking through Cross Roads, I heard two men having an argument. I heard them before they even came into my line of sight - that's how loud they were.

From what I could gather of the conversation, one man who I assume was a bike messenger (had the helmet and the bag and all that) was threatening another gentleman for what, I have no idea.

Bike Man, as I call him now, told the other gentleman in quite clear terminology that he was going to stab and/or shoot him in a part of the anatomy that a man doesn't have.

The other fellow was far more docile. He wasn't as loud, but I guess he didn't want to remain completely silent lest he be considered 'soft'.

But Bike Man was clearly the offended party. He berated the other man with curse words that would make your church-attending grandmother cringe.

The other man smiled and shook his head, clearly wanting an end to the confrontation.

"A town mi born and grow innu! A dat mi a tell yuh," Bike Man asserted. I suppose that was to strike fear into the heart of the other fellow.

"A dat yuh say? All right boss," said the other man, still grinning. I'm not saying he wasn't scared, but I highly doubt it. He certainly didn't look like it.

I didn't stick around long because, for one, I had stuff to do, and two, I really didn't want to witness any potential crime other than the use of indecent language (does anyone get fined for that anymore?).

To my knowledge, the only 'murdering' that took place was verbal. But all it would have taken was for the quiet guy to tell Bike Man about what to do with a female relative and we probably would have had a fight, or worse.

Sigh. Seriously, why can't we all just get along?