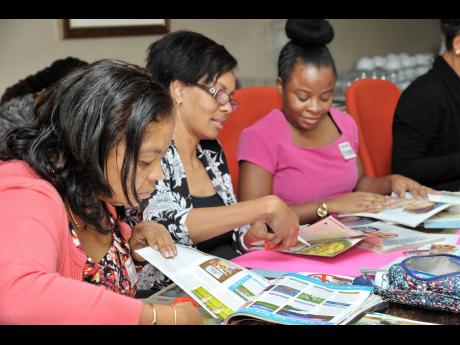 Contributed
JMMB Insurance Brokers team members (from left) Sheron Gilzean, Caroline Stone and Crystal Murdock are focused on the task of hand – selecting the best images to represent their vision of their future selves. 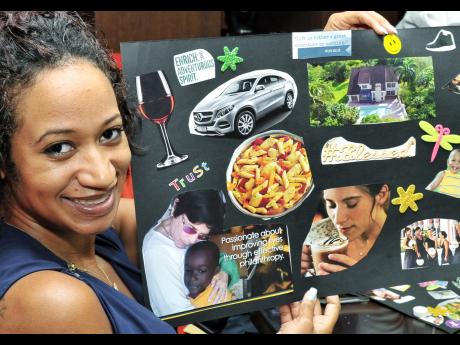 Contributed
JMMB’s Suzanne Hendricks is all smiles as she shows off her vision board. 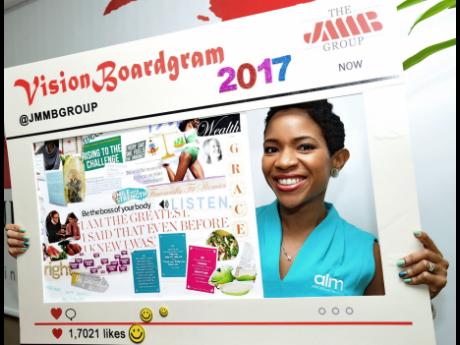 Contributed
Educator and motivational speaker Nicole McLaren-Campbell, who facilitated the recent JMMB vision board party, is pictured with her vision board in hand.
1
2
3

Setting New Year’s resolutions is one way that many individuals signal their commitment to making a positive life change. Motivational speaker, educator and director of AIM Educational Services, Nicole McLaren-Campbell, presenting at a recent JMMB Vision Board Party, recommends the creation of a vision board. This, she said, will help individuals to achieve the changes they want in their lives.

Simone Dunbar, human resource administration manager at JMMB, told Flair that they decided to host a vision board party to provide employees with an opportunity for self-reflection in crafting plans and goals, by visualising the future they want to create, so that they can uncover the greatness in themselves.

McLaren-Campbell advises that the creation and success of a vision board is underpinned by one’s commitment and not by the creation of the board itself. She said, “If a goal is important to you, then commitment and work are needed to close the gap between what you want and how you will achieve it.”

CREATING YOUR VISION BOARD

She outlines that the first step in creating your vision board is self-reflection and self-belief, where you visualise your future self as already accomplishing these goals, forcing your mind to go beyond your current circumstances. “I believe in the power of the mind, and so the change that you want begins with a change in your mindset.”

Following the self-reflection exercise, McLaren-Campbell led the JMMB team members to outline at least four goals that they would like to achieve, and set a timeline to achieve each goal.

Upon concluding the session, team members wrote a ‘letter to their future selves’ that would be returned to each participant in six months. JMMB’s Creative Services Officer Toni-Ann McKenzie, who attended last year’s session organised by the company, revealed that ‘the letter to you’ was the most impactful part of the exercise for her, as it “helped me to concretise my goals so that I could be more accountable to myself and have a road map to my destination”.

Similarly, that exercise was equally impactful for Michelle Falconer, manager, corporate planning, JMMB Group. She recalls that upon receiving her letter six months after the session she did in 2014, with no accomplishments to check, she decided to refocus her efforts on her vision and take action. Today, Falconer is engaged and happily planning her summer wedding, in addition to preparing to launch her swimsuit line.

Although New Year’s resolutions often last as long as fads, fading as time progresses, the vision board exercise has proven to be an effective way to motivate individuals to achieving change and accomplishing goals. In encouraging others to make use of the vision board exercise, McLaren-Campbell outlines “the magic is in the action, and then everything seems else falls into place so you can achieve your goals".