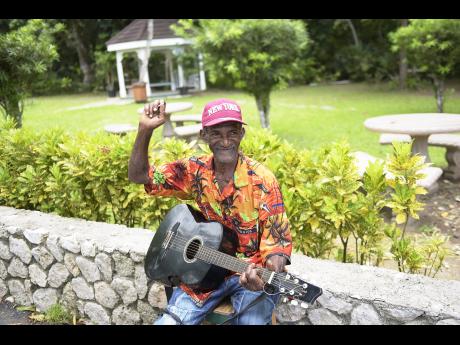 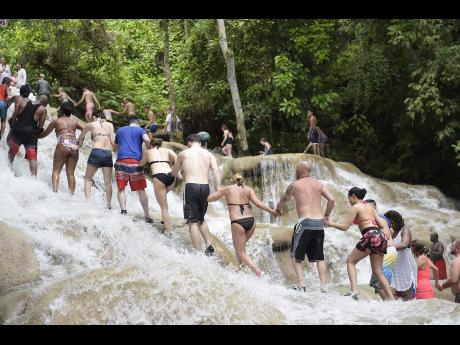 Gladstone Taylor
It was an exciting line up leading to the top of Dunn’s River Falls. 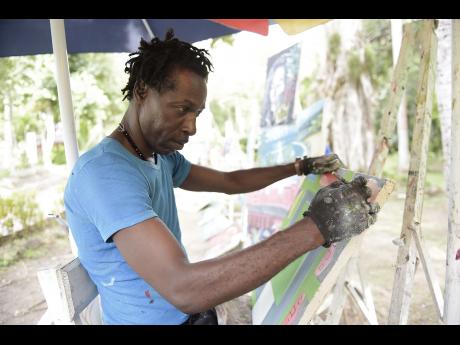 Gladstone Taylor
It’s all in a day’s work for artist Horrett Malcolm, who captures the colour of Dunn’s River Falls, one painting at a time. 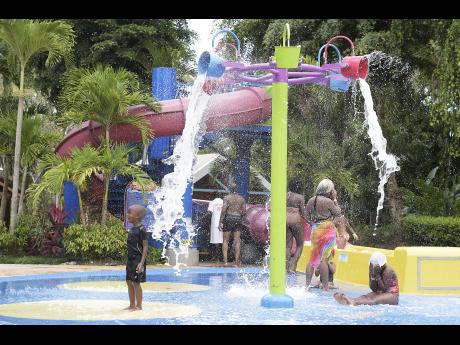 Gladstone Taylor
Child’s play is at its highest as the children of Anchovy Basic School enjoy the splash pad. 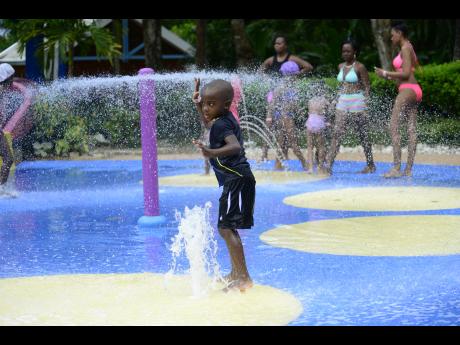 Gladstone Taylor
This little boy is seen having the time of his life! 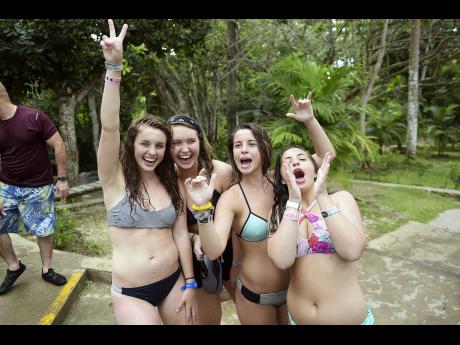 Gladstone Taylor
Adventure surely runs in the McCulley family for (from left): Macie, Maddie, Morgan and Maryn, who were more than thrilled to make it to the top of Dunn’s River Falls.
1
2
3
4
5
6

Welcome to Krysta Di Xplora, where I will be journeying to explore some of Jamaica's most gorgeous and sacred gems. My first stop is in the Garden Parish of St Ann at the beautiful Dunn's River Falls. So get out those passports, because we're going to Ochi! In photo: It was an exciting line up leading to the top of Dunn’s River Falls. -Gladstone Taylor.

You know how they say, "Don't go chasing waterfalls?" Well, Dunn's River Falls is definitely worth chasing! Located in the land of eight rivers, Ocho Rios, Dunn's River Falls and Park has a rich history of entertaining foreigners and locals looking to experience the ultimate aqua adventure.

The Flair team arrived on the scenic spot just a little after midday last Tuesday, where we were pleasantly greeted by a radiant customer service representative, Sophia Henry, later to be named 'SoFlairia' by the team. In photo: This little boy is seen having the time of his life!

UP CLOSE AND CENTRAL

While Dunn's River Falls and Park is famous for it's river, waterfall and beach, the new craze on the property is The Central Gardens. The serene park was a breath of fresh air, with swaying trees dancing in the cool breeze. Happy, adorable screams from energetic children echoed just a stone's throw away as they enjoyed the main features of the garden, the water slide and splash pad.

According to supervisor Paul Parkinson, the new addition opened four months ago, and so far the reception has been great. He noted that they wanted to create a space that could facilitate children. The water slide and splash pad, which includes water buckets, is a big hit among the young and the young at heart. "All ages can enjoy the splash pad since it isn't deep. And we're looking to expand and include a pool for the adults as well."

We discovered that the excitement at the water slide came from students and teachers from the Anchovy Basic School in St James, who were on a field trip. Nyoka Evans, a teacher at the school, explained that she liked the new addition, but it would be nice if they had a kiddies pool where the children could learn to swim. She pointed out that it would be nice if it could be expanded because when there are many children present, the splash pad is cramped. She also added that since a few of the houses in the garden are inactive, they could build a playpen of sorts, for those children who don't like the water.

Principal of Anchovy Basic School, Cauvet Dehaney, also said the expansion is good. "The pool could've had a little more depth to it and they could've had a bounceabout somewhere. Apart from that, I'm happy they are able to accommodate children, and I love the fact that they're economically friendly," she said.

'SoFlairia' later escorted me to the Logo Central, where we met up with sales representative Jessica Morris. Bursting with enthusiasm, she showed us some of their best branded merchandise for purchase, encouraging us to return once we had survived climbing the falls to buy one of their signature shirts. In photo: Child’s play is at its highest as the children of Anchovy Basic School enjoy the splash pad.

From there, all roads led to the main attraction, the falls. But we made a few stops along the way. We could not pass the amazing pieces painted by talented artist Horrett Malcolm. Pretty soon, we were watching him live in action, capturing his active surroundings in a myriad of colour. Speaking of action, guitarist and singer David Ellison serenaded passers-by with his rendition of the great reggae legend Bob Marley's One Love. Of course, we joined in, singing and dancing to the popular reggae hit. In photo: It’s all in a day’s work for artist Horrett Malcolm, who captures the colour of Dunn’s River Falls, one painting at a time. -Gladstone Taylor.

I'm no stranger to Dunn's River Falls. I've actually climbed to the very top in my formative years. But pressed for time - that's my story and I'm sticking to it - we decided to sightsee as far as the falls goes. My dedicated team, accompanied by SoFlairia, made our way to one of the lower-levelled decks to view the brave, some fearful, following the instructions of the lifeguards as they climbed their way to the very top of the falls. Cameras out from every angles, Dunn's River Falls and Park videographers were present to record your accomplishment against the most enchanting backdrop ever. Hiking back to the top on land was treacherous, and made us wonder if the trek via the falls would've been any easier - I highly doubt it, but it definitely would've been far more worth it! In photo: Adventure surely runs in the McCulley family for (from left): Macie, Maddie, Morgan and Maryn, who were more than thrilled to make it to the top of Dunn’s River Falls. -Gladstone Taylor.

The view from the very top was simply breathtaking, and while there, we caught up with the McCulley sisters, who were in Jamaica for the first time with their parents. Thrilled to share their experience, they described the climbing journey to the top as awesome, amazing and a real adrenaline rush!

But don't just take their word for it, make a trip and try it! I know I will again - one day soon!

For more information, contact Dunn's River Falls and Park at