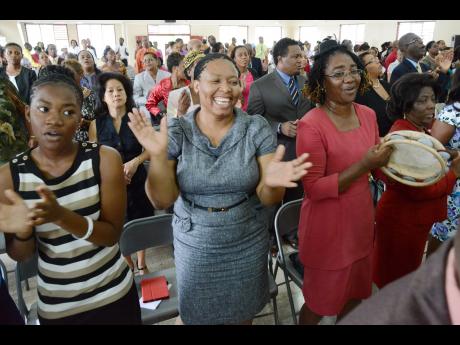 Rudolph Brown
Worshippers participate in a thanksgiving service at the Christian Fellowship World Outreach Church. Despite the rising tide of atheism, columnist Martin Henry says it lacks the moral underpinnings to anchor society.

Atheist-for-the-time-being and vigorous public defender of that faith in the press, Michael Dingwall, has thrown Christians a challenge: 'Christianity needs a newer testament', he wrote in The Gleaner of June 17.

I am deeply irked by people who suck the fruits of Christian faith and then refuse, whether out of ignorance or sheer bad-mindedness, to acknowledge the tree which produced the fruits. But Dingwall seems to be of different stock. "Although I am an atheist," he says, "I do think that in terms of being a moral guide for creating and preserving societies, the Bible is perhaps one of the better ones."

Christianity, he confesses like any born-again believer, has proven to be a great aid in promoting human moral evolution. And it can still continue to do so in the future, but only if it changes, he believes.

Dingwall's own faith, atheism, has proven to be a dismal and destructive failure on the few occasions it has had opportunity to order human society. Largely in the short-lived state of the French Revolution and in 20th-century communist states, most of which have already disappeared within just a few decades of their appearance. By their fruits you shall know them, declared the founder of Christianity, Jesus Christ, for whom Dingwall seems to have a great deal of respect. Not realising, or honestly acknowledging, like so many other antagonists of the Jesus religion that the preposterous claims which Jesus Christ makes for Himself and the impossible demands he makes upon humans make respect for Him without obedience to Him complete nonsense.

The wing of Rastafarianism, and Dingwall has taken to advising Rastas as well, which chants 'bun Jesus!' is far more honest than the respectful atheist. And we must constantly bear in mind that atheism is predicated on higher intellectual calibre than that possessed by the childish simpletons still clinging to a primitive belief in divinity.

Anyway, Mr Dingwall's advice to Christians is that he thinks the time has come for Christianity to give itself a major overhaul. "I am proposing," he says, "that Christians move on and accept a newer testament - one more in tune with our time." And he sets out some of the adjustments that would need to be made, according to his distorted understanding of Christianity, to accommodate modernity.

In his haste to recommend from an obviously loftier plane of reason, Dingwall completely overlooks the stark fact that Christianity was never more out of sync with its surrounding cultures and societies than at its founding and during its first couple of hundred years and was very deliberately never intended to be in sync with 'the world'.

Despite its worst faults and failures in its practice by sinful people, Christianity has been the primal mover in the construction of Western civilisation, now global civilisation, producing an amazon of positive values and practices that define free and democratic societies and which people of all religious persuasions, including atheists like Michael Dingwall, now cherish.

Take for a start the matter of freedom itself, of individual liberty. Freedom scholar, Jamaica-born Harvard professor of sociology, Orlando Patterson, writes in the preface of Freedom in the Making of Western Culture: "No one would deny that today freedom stands unchallenged as the supreme value of the Western world. It is also the central value of Christianity: being redeemed, being freed by, and in, Christ is the ultimate goal of all Christians ... ."

Aristotle argued that some men were born to be slaves and were only fit to be slaves. To which C.S. Lewis tartly responded, "I will not dispute with Aristotle, but no man is fit to be master!"

Yes, Christians kept slaves, like every other society and religion as Michael Dingwall points out in other writings, and they justified their action by the Bible, contaminated with Aristotle. But ONLY the Christian culture has ever repudiated and abolished slavery on moral grounds with the rest of the world tagging along or forced to comply.

And only the slaves of Christians, some of them Christians themselves like Samuel Sharpe, acknowledged in their masters' holy book a moral imperative for their own freedom.

There is absolutely no moral imperative in atheism, as there is in Christianity, for human freedom or to restrain the strong from dominating the weak to their own advantage as the hypothesis of evolution requires. In the few experiments with atheist states, this has been exactly the result, and we have absolutely no reason to expect otherwise.

Dingwall is concerned about gender inequality. It has been Christian society, slowly but surely, which has led the world in bringing the greatest liberation to women (and to the other underclasses of history) - security in marriage and divorce and after the death of a spouse, property ownership, education, political participation, out of home employment, life expectancy, dress, you name it. Have a word with the veiled women in oil-rich, ultra-modern Islamic Saudi Arabia of the 21st century.

It was Christian society which anchored freedom in parliamentary democracy, from Magna Carta through John Locke and Oliver Cromwell. Locke's political philosophy of freedom and constrained representative government heavily influenced both the American and French revolutions.

The French Revolution was atheistic, the American, strongly Christian; with very different outcomes from the same Lockean ideals of democracy.

From its concepts of individual liberty and property rights, Christian society invented capitalism, or, stated better, the political economy of free enterprise, with critical players like Locke again and Adam Smith. Smith's earlier The Theory of Moral Sentiments (1759) has had almost as big an impact on political economy as the better known and later (1776) An Inquiry into the Nature and Causes of the Wealth of Nations.

Even its enemies concede that capitalism, with all its many sins, faults and failures, aggravated by disconnection from its Christian roots, has been the greatest creator of wealth for the greatest number of people and has done more to lift more people out of a life that is "poor, nasty, brutish and short".

The only few atheistic states that have ever been established have been decidedly anti-capitalist in their founding, although reality and envy have often softened their stance.

There is little question that a Christian society created modern science and modern science-based technology, very specifically as a Christian enterprise, something which atheists, but hopefully not Michael Dingwall, like to attempt to dispute by ignoring a mountain of facts.

Conceding all the faults and failures of Christianity, real and imagined, these are by any measure extraordinary achievements by what is a system of falsehood, as atheist Dingwall sees it, and founded by a Mad Pretender. Achievements which have become the cornerstones of modern global civilisation which he enjoys and wants to preserve.

Atheism has delivered no such credibility-enhancing results.Where it has had opportunity, it has been nothing but a bloody disaster.

It is atheists who need a Testament. But it has to be the hardest, most pointless, task in the world to write a covenant built upon a negation. If there is nothing, why bother?