Criminals must be afraid 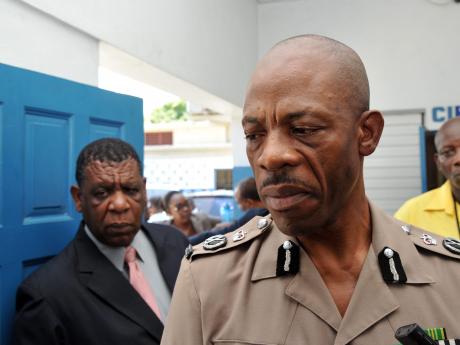 Norman Grindley
Police Commissioner Carl Williams (right) arrives at the Denham Town Police Station to convene a high-level meeting in the wake of two cops being murdered, in separate incidents, in the space of a week. Looking on is Ealan Powell, assistant commissioner of police.

I have always maintained that Jamaica has been too ambivalent about crime. On the one hand, we are incensed and outraged when there is an alarming increase in crime and we shout in panic for the Government to 'do something'. But when tough action or legislation is suggested, we are intimidated by the human-rights fundamentalists, mostly lawyers, who are safely tucked away in their middle-class communities.

We desire contradictory things: We want crime to be reined in but we want to maintain our idealistic fantasies. In our crime-ridden society, we want maximum security and maximum liberty. In an ideal society, we can have both. In our real context, we have to engage in a trade-off, as commonsensical columnist Ronald Mason reminded us last week in his excellent Sunday Gleaner column.

The Gleaner raised an alarm in a lead story recently when it reported the police commissioner's comments in favour of amending the Bail Act to allow people to be bailed before they are charged. Says The Gleaner: "Four years after the Supreme Court struck down amendments to the Bail Act, Jamaica is again toying with the idea of arresting people even without sufficient evidence, as part of wider move to stem the rising tide of violent crimes."

Attorney Hugh Wildman was quick to make the wild assertion that any such move would be unconstitutional. "It cannot be done ... . It is an ill-conceived position of the commissioner." But if you think you can make a dent in murders by simply teaching people to be better parents, encouraging more youth to go to church, having more social interventions and human rights training for police officers while fixing the economy, you had better have your head examined. Those commendable moves will not produce any reduction in crime next week. You will have to go pick up some of these suspects from the streets even when your intelligence can't be converted into evidence today. Even temporarily, you have to pluck them from certain communities, sending a signal to others that you are coming after them. Criminals must be afraid, not us. They must be uneasy, not us. They must know the police are on their trail, not they on ours.

We can't be deterred by bleeding-heart liberals whose pie-in-the-sky remedies would leave all of us dead ultimately. Even INDECOM felt impelled to come out in public support of the commissioner, whom The Gleaner had projected as taking a draconian position. In a letter to the editor through its senior public-relations officer, Kahmile Reid, INDECOM says, "One might argue that if there is insufficient evidence, then a suspect shouldn't be charged until this standard has been met. However, sometimes it may not be prudent to wait until you have gathered sufficient evidence to arrest a suspect, as it is feared that the suspect may interfere with the investigation. Bail pending charge provides the possibility of managing/monitoring the suspect while gathering sufficient evidence to meet the relevant standard."

So it is not so draconian but sensible, after all. But there is a knee-jerk reaction to anything that smacks of interference with liberty. What the purists must understand is that individual liberty cannot trump group or community security. The first responsibility of the State is to protect its citizens. You can't have a civil society, you can't protect individual liberty, if there is no law and order. Yes, appeals to law and order have been used as a ruse to mask autocratic rule by national-security states. But one can't use slippery-slope neurosis to inveigh against legitimate, justifiable concern for national security.

Media, heavily influenced by the human-rights fundamentalists with their powerful vested interest, reflexively pander to their concerns. Yet the editorials become plain-speaking and hard-hitting when crime increases. This media schizophrenia must stop! The Jamaica Observer, in its editorial last Thursday, 'Resounding response necessary to police commissioner's question', bemoans: "Jamaicans have not reacted with the kind of sense of purpose and stridency required to show the brutal gunmen running rampant in our land that the entire country is prepared to stand against them." And how do you think we can do so without earning the ire and fire and brimstone from the human-rights fundamentalists who have easy access to talk shows, public-affairs programmes, and newspaper columns and editorial pages?

"Crime fighting needs the full support of the populace to succeed." Indeed. But we want to eat our cake and have it. We want to oppose every piece of legislation to make it harder for criminals to thrive, under the guise of 'protecting liberty' (while endangering lives!); at the same time shedding crocodile tears over people murdered. The Observer editorial writer acknowledges that "imperfect as the Jamaica Constabulary Force is, it is what stands between the gunman and anarchy in our society. If gunmen feel they can kill policemen and women with impunity, that would embolden them in their criminal activities generally."

They are already getting enough signals from civil society and its utopians to embolden them. They know in certain circles it is the police who are coming under more fire, as it were, not them.

The Observer is fed up: "We think the time has come to put an end to all these excuses and for the country to unite against criminality and these wanton killers who spare none, not even babies or old ladies." We have to stop sending contradictory signals to the criminals. They must not feel any tacit support from any of us through our mealy-mouthed commentary. The facts show that St James, Hanover and Westmoreland have the highest murder rates. Crime is very concentrated in Jamaica. The police must increase curfews and detentions in these areas. Life must be made difficult for criminals in these communities. They must not be able to enjoy their lotto-scam proceeds. They mustn't have time to be in the dancehall.

Ron Mason is one lawyer who is not making sentiment get in the way of rational, down-to-earth thinking. "This new approach to crime fighting should include the following: Curfew and search geographic zones without notice. Search every vehicle, every residence and every resident. Get the unlicensed guns from uptown and the ammunition and drugs all across the country. Take persons into custody and secure convictions. Penalties must be draconian." When last have you heard a lawyer talk like that?

"We need to shock uptown, downtown and all around town and country. All of us need to learn that we are going to be inconvenienced in this fight to reduce murders," Mason writes. He even wants Government to put criminals to hard labour. Get some productive work out of them for the society's sake. "Let them break rocks and work on national construction projects." But you have to catch them first. That's the rub. And often when you catch them, they have enough money to get high-priced lawyers to get them off. But take them off the streets, even when you don't have all the evidence in hand to convict them. To wait for that is to cause more lives to be snuffed out.

The minister of national security must make some tough decisions. The minister, as I wrote earlier this year, has been engaging in game-changing strategies. He has been taking the right, nuanced, holistic approach to fighting crime. He has been doing a lot of the things that the human-rights fundamentalists and bleeding hearts have been recommending: He is stressing good parenting, and especially reaching out to fathers. He is strong on social intervention.

Bunting's Unite for Change programme is noteworthy. He is stressing education, employment, proper values and attitudes. Police fatal shootings are down. He has boasted of drastically reducing curfews. But he has to be a pragmatist. He has to know how to mix his policies and when to apply tough ones.

His long-term strategies are good and will eventually bear fruit. But as Keynes said, "In the long run, we are all dead." And quicker, too, in Jamaica if we continue at this rate! Bunting and the commissioner have outlined some good crime-fighting decisions. But both men need to be tough and resolute.

Criminals must be afraid. They must take the fight to them and not back down. While your Government is fixing the home, school, economy, social norms and asking for divine intervention, Mr Minister, you need to do some of the things Ronnie Mason has called for to get these vicious, dog-heart criminals who are running wild. We don't have time for all your laudable medium, long-term and game-changing strategies to fully kick in.