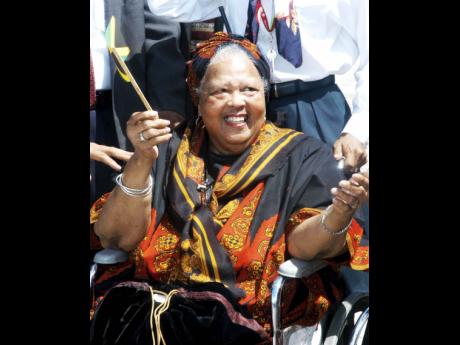 Remember when we got married in January, 1971, and Louise Bennett-Coverley (Miss Lou) danced at our wedding in a garden ceremony near New Castle? And Eddie Thomas, my best man, taught the Gordon Town mento band to play Here Comes The Bride as you appeared before Father Grenier on your father's arm?

I suppose I already knew that we were destined to begin our marriage living in one of Miss Lou's cottages in Gordon Town, and you and I, with 'our landlady's' encouragement, were to become very much a part of the community. You spent a lot of time listening to Miss Lou's recollections of Old Time Jamaica (while I was outside getting an earful from Marse Eric!). Louise would spend a leisurely morning in her bedroom surrounded by her much-loved adopted 'pickneys' preparing for her radio and television programmes, occasionally interrupted by her neighbourhood friends Barbara Gloudon and Lois Kelly, among others.

We became regulars at her near-legendary New Year's Eve parties, which eventually ended when one interloper (of many) asked Eric whose party it was! There were often hilarious incidents like the time a musician's instrument case fell open as he was leaving and the Coverley family silver fell out!

Happy times filled those early years, and Miss Lou even suggested naming our first daughter Beeny Bud, which, of course, became your inspiration for writing the Beeny Bud stories about a little girl growing up in rural Jamaica.

You remained a great admirer of Miss Lou's and a good friend even after she and Eric departed to live in Toronto near to his son, Fabian. I remember the long phone calls the two of you had after she left.

When she died in 2006, we were in England and read the fulsome obituary that Mervyn Morris, her biographer, wrote for the Guardian newspaper.

When you edited the book The Best of SkyWritings - A Tapestry of Jamaica, you devoted 16 pages from the airline's magazine to her, some contributed by Miss Lou, others acknowledging her place in Jamaican culture.

You were concerned that apart from her writings (JBC had scrubbed the tapes of her Ring Ding TV programmes!) Jamaica still needed to be able to see her in our midst. In fact in February, 2012, you and your SkyWritings editor called on the minister of youth and culture with ideas for honouring her legacy. They included erecting a statue in a popular place where performances of her poetry and narratives could be enjoyed.

The year 2012 was difficult for me, but in October, 2013, I discussed your idea with Mervyn Morris and together we sought out Leslie Chung, chairman of the National Preservation Foundation, responsible for the Hope Gardens. Regrettably, Poet's Corner is to be relocated in the south-western section of Palm Drive. Palm Drive is the elegant former popular entrance to the garden from Old Hope Road, which is currently closed. Anxious to find a similarly appropriate public place, I approached the National Housing Trust through its senior general manager Donald Moore. We identified a site in Emancipation Park that seemed suitable, and he agreed to propose it to his board. I think I should set out chronologically what transpired subsequently for you to try to understand why the project has not yet materialised.

Fabian Coverley advised me that he and the co-executor to Miss Lou's will were "enthused and ecstatic" about the project and endorsed it without reservation.

I wrote to NHT setting out your desire to see Miss Lou in Emancipation Park, describing your family's commitment to securing the finances. In my enthusiasm - and anticipating that others would be equally keen to see the project proceed - I had asked Valerie Bloomfield-Ambrose if she would undertake the full-figure bronze sculpture. As you know, she had created the unforgettable sculpture of Sir Philip Sherlock on the University of the West Indies (UWI) campus. Incidentally, Valerie was awarded an honourary Doctor of Letters by UWI in 2012. The well-known architect Patrick A.O. Stanigar provided a detailed schematic of the proposed location. I explained that the sculpture would take six to eight months to complete, which meant early approval would be appreciated.

Disappointed that no action had been taken by the NHT, I sent a duplicate of the details of the project directly to the minister, which received a speedy acknowledgement.

I wrote again to the minister, who explained that she required Mr Moore to initiate a discussion.

The minister emailed me saying that she had met with the NHT team but explained that others at different levels would need to be consulted.

The minister informed me that "several interactions" had taken place and she was waiting for an "action plan".

An Institute of Jamaica Monument Committee met to consider the proposal and to produce the action plan.

At the time of writing this, I have not heard anything more as to any plan or any action emanating from the Monument Committee.

I am sure you are wondering why it is so difficult for your dream to come true despite the sympathetic support provided by the NHT and minister of youth and culture. In Miss Lou's biography written by Mervyn Morris, he described her as "one of the most influential figures in Jamaican culture". For someone to whom Miss Lou - and the nation - meant so much, up to now, this project has been a frustrating disappointment.