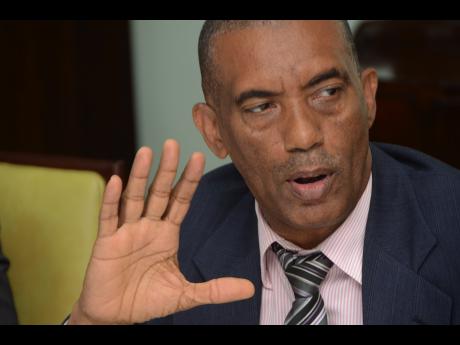 The Gleaner Online reported two dastardly sets of murder committed on either side of a single 24-hour period. The murders were of a father and his one-year-old son, both of whom were shot multiple times in a deep rural district, Flamstead in St James.

The other was of a young 22-year-old medical technology student from UTech as she walked with a colleague on her way home at 7 o'clock in the evening in the upscale community of Hope Pastures, St Andrew. In the case of the toddler and his father, we have offered ourselves an explanation for that blood-curdling atrocity - that the father of the baby was involved in a feud, so they slaughtered him and his child as he clutched his baby in his arms.

The young student was killed because she refused to hand over her handbag to men in a motor car who demanded it. When she sought to escape, one of them simply got out of the car and shot her in her head.

What is dreadful about these two acts of wanton criminality is that they come in the context of signs of the immaturity and insensitivity of the society as a whole and the sense that one gets that the Jamaican society is going in reverse.

These murders occurred following assertions by former prime minister and Leader of the Opposition Andrew Holness on a political platform last weekend. He asserted that murders spike when the People's National Party (PNP) is in government. Quite apart from the fact that the statistical digest of murder over the years does not support the assertion by the Jamaica Labour Party (JLP) leader, rather, in fact, they raise interesting questions about an increase in the murder rate when the JLP is in Opposition.

Of note is that murders spike many times but always in the fourth year when the JLP is in Opposition: 1980, 1993, 2001. The only exception is 2006, when the spike was in the fifth year. The suggestion implied by those who ask, "Who pushes the murder statistical spike and why?", may well be a valid one.

The JLP makes wild and backward assertions, but then when they are confronted with their own words, they have developed the now-practised and self-serving outrage followed by taking up their marbles and abandoning the game. It is time for the JLP to grow up.

Worse than the misbehaviour of the JLP leader is the collective loss of a sense of social opprobrium in the Jamaican society where murder is concerned. What the JLP leader has done on the political platform emanates from a society that has lost the stomach for outrage and to confront the truth about itself where crime and violence is concerned.

The West Kingston commission of enquiry has been very important in offering Jamaica an explanation on the infrastructure of criminality in Jamaica. Despite the best efforts of those who have sought to conceal and derail it, through the commission, a picture has emerged.

From the evidence that has emerged, the community of Tivoli Gardens was the epicentre of criminal violence and heartless murders. The criminal gangs connected to West Kingston were well resourced, organised, and well-prepared. In fact, the security forces recovered 141 guns of various calibres and more than 7,000 rounds of ammunition from their operations in West Kingston.

I am not sure why Commission Chairman Sir David Simmons has refused to allow the Jamaican society to see the display of the 141 high-powered weapons recovered from the criminal apparatus in that community.

In his evidence given before the commission, Senior Superintendent Colin Pinnock, the officer in charge of the Mobile Reserve, made two important remarks. The first was that the communities of Back Bush, Red Hills Road, Tawes Pen, Norwood, and Glendevon, among others, all communities that are JLP strongholds, erupted in May 2010 in the effort to stretch the security forces and thwart their efforts to apprehend Christopher 'Dudus' Coke.

The second thing he said was that when 20 members of his team responded to the distress call of police personnel under fire on Mountain View Avenue, on the night of May 23, 2010, they were greeted with sustained gunfire in the vicinity of Excelsior High School. Eight cops were shot and injured, two fatally. According to the police officer, the gunmen who were behind wall laughed and said, "Unnu a go dead tonight."

The Jamaican society has not yet made atonement for those murders of policemen along Mountain View Avenue. The Jamaican society has not yet captured or contained the residue of those who fought for Dudus. We are pretending that the events of May 2010 never happened. We are pretending that those who went to West Kingston to fight for Dudus or staged gun battles to draw the security forces away from Tivoli Gardens have left Jamaica on the plane with Dudus and are safely ensconced elsewhere. They are right here.

I am not suggesting that violence began in May 2010 or the period leading up to it. Rather, I am indicating that the culture of burying our heads in the sand has been most pronounced since then.

What about those who protected them, defended them and deflected attention away from them so that they could get away with murder? When is their day of reckoning going to come?

Peter Phillips last week said the JLP has a truth problem. Unfortunately, it is not the JLP alone; Jamaica has a problem with truth. The murders of the baby and the young lady are a moment of truth. How many more will we need?

To be fair, I get the sense from the present minister of national security, Peter Bunting, of a courageous and nuanced approach to crime fighting. I think of his call for divine intervention, his Unite for Change initiative, his strong message against lotto scamming, the raft of legislation against gangs and against proceeds of crime and narco trafficking. These are all steps in the right direction.

It requires all of us. All hands on deck for the sake of all of us. Can we make one last grand push as a Jamaican people against murder to bring it to manageable proportions once and for all?