The coloured face of Islamic extremism 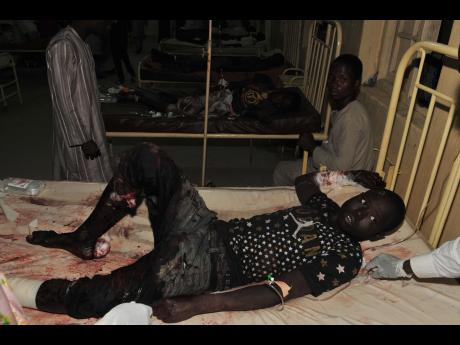 AP
Injured males receive treatment at a local hospital following an explosion at a mobile phone market in Kano, Nigeria, last Wednesday. Suicide bombs exploded as truckers were tucking into dinne, killing at least 34 people and wounding 80. Later that day, two more suicide bombers killed at least 15 people in the northern city of Kano and injured 53.

One of the benefits of being able to speak four languages is that I have learned that people die in different tongues, and the death of a Frenchman gets lost in translation when viewed by someone who only speaks Swahili.

Can you imagine then when someone gets killed in Amharic, one of the oldest languages spoken on earth, the native tongue of Ethiopia? Well, in April 2015, some 30 Ethiopian Christians were beheaded by ISIS and it took a little bird to tell me. It might be inconsequential because 32 Nigerians were killed in the Yoruba or Ibo language and another 80 injured in the third major suicide bomb attack in three weeks.

On October 23, 2015, forty-two Nigerians were murdered and at least another 100 injured by similar methods. Two females blew up themselves and 13 others in Damaturu on October 3, 2015.

Believe it or not, Boko Haram, the Islamic extremist group operating in the most populous black country in the world, has claimed more than 2,000 Nigerian lives since January. Indeed, risk consultant Verisk Maplecroft has recorded a much higher figure, at 3,770 civilian deaths. According to The Associated Press, a six-year-old Islamic insurgency has led to the deaths of more than 20,000 Nigerians during the period.

Black lives matter, and bet you that hardly anyone remembers that 147 persons were killed at Garissa University in Kenya in April and that the impact of that is still felt. As a matter of fact, just three weeks ago, the university reported a mass exodus of hundreds of its students who felt that the security forces could not guarantee their safety. The point is, scores of black people are being terrorised and massacred by persons who seem to have read the Qur'an differently and found a missing text, which prescribes suicide and hatred.

TERRORISM IS A SCOURGE

I find it extremely painful particularly because Bilal, the first disciple/apostle of the Prophet Muhammad, was black, and like Sts Peter and Paul, in Christendom, is responsible for the spread of Islam across the Old World. Interestingly, it is almost like when the black Pope Militiades baptised and consecrated Emperor Constantine, and officially brought Christianity to the Roman Empire and thus Europe. Yet centuries later, Christianity became the vehicle for persecution of thousands and justified the one-way trip of transatlantic slavery, which causes a black man to be writing this column from Jamaica.

Don't get me wrong. I have deep sympathies for the French, and so that I am not misunderstood, let me say, "Je suis tres desolÈe, et j'espËre que vous trouvez les criminaux et toutes les conspirateurs." (My condolences, and I hope that you find the criminals and conspirators). Moreover, I have many friends in France and some family members who make the Paris trip regularly.

Terrorism is a scourge on modern civilisation and must be countered with all tools in our arsenal. It's just that it bothers me a bit when only one set of lighter-skinned news gets reported. And it is not only the foreign journalists and politicians who are doing it. Our own politicians have jumped to express sympathies, and justifiably so. However, perhaps they don't read other newspapers or listen to bright people, but I am still waiting for our minister of foreign affairs to comment on the African massacres, or even a token protest, such as the symbolic detention of a handbag painted in the colours and insignia of ISIS.

Nonetheless, if focusing on the attacks on the west will spur the international community to act more swiftly and with greater determination, so be it! True, it is extremely difficult to arrest, charge and interrogate a successful suicide bomber. Furthermore, the one surviving terrorist of the Paris attacks was killed by the police. Therefore, unless the French authorities have the skills of Jonah Hex or the Lazarus touch, dead men will tell no tales.

Inasmuch as I congratulate the gendarmerie for their swift action in apprehending other suspects and terminating mastermind Abdelhamid Abaaoud, I am unimpressed that they believed that he was in Syria and were clueless that he was walking around in France, eating baguettes and croissants, instead of hummus and halal meats in the Middle East. One can just imagine the 'sacrÈ bleu' curse words.

why the west is so hated

Still, my view is that the west has totally misunderstood the threat and enemy that they and we are facing. Let me first tell our allies to recognise that suicide bombers are not cowards. so stop fooling yourselves! A coward is "a person who is contemptibly lacking in the courage to do or endure dangerous or unpleasant things". Now, as far as I can recall, a coward is one who shudders in the face of danger and often produces copious amounts of body fluids in his undergarments, with occasional involuntary release of solid faecal matter.

Someone straps an explosive belt on himself, walks into a place, where he wants to make a statement to further his political or religious objective, and faces the certainty of death with stoicism and embraces it. If there was fear, it must have been the trepidation that the security forces would thwart his efforts at misconceived martyrdom.

Inasmuch as Islamic extremists have no scriptural foundation for taking their lives in attacking the infidels, the self-sacrificing dead, who were misguided by a warped interpretation of Islam, need to be understood. Western governments must enlist the assistance of anthropologists, sociologists, and social psychologists in deciphering why the west is so hated, and what motivates these people to join ISIS and other such groups and engage in jihad.

The model for global safety is the same for the American, British and French military as for the Jamaican constabulary. ISIS and Boko Haram are just big gangs. We cannot kill all our enemies. Rather, we must try to reduce the factors that lead to their creation and fight for control of their minds.

However, the effort must be truly international. The west must not only embrace and comfort the white side, they must also face and kiss the black side, too.

- Dr Orville Taylor, senior lecturer in sociology at the UWI and a radio talk-show host, is the 2013-14 winner of the Morris Cargill Award for Opinion Journalism. His just-published book, 'Broken Promises, Hearts and Pockets', is now available at the UWI. Bookshop. Email feedback to columns@gleanerjm.com and tayloronblackline@ hotmail.com.