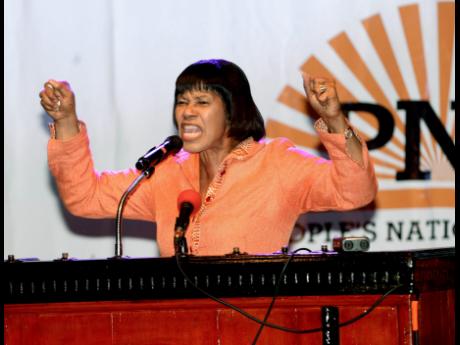 The massive Sunday evening Comrade Service expected for Half-Way Tree today is off, Portia's Master not having yet made the call to her to sound the trumpet for the congregation to assemble. Instead, the Comrades who were bursting with expectancy for a white Christmas will have to settle for Black River this evening.

Apparently, every little thing is not all right just yet for the People's National Party (PNP). But in their case, delay is not danger. Portia's Heavenly Master might not have touched her as yet, but our earthly masters, the International Monetary Fund(IMF), recently touched down with some good news that $4 billion will be freed up this fiscal year and another $8 billion next fiscal year because of an adjustment to the primary surplus decree. This is a significant lifeline to the PNP Government.

While Finance Minister Phillips has been quick to reassure a cynical public that this is no green(?) light for reckless election spending, and the neo-liberal champion, The Gleaner, warned editorially on Monday, 'Don't let go of fiscal discipline', there is growth-inducement money available. It's not election spending. It's simply spending for well-needed infrastructure. No less an authority than local IMF overseer Dr Bert van Selm advised in last Wednesday's Gleaner that "Jamaica's infrastructure roads, water, irrigation projects, ports and airports clearly need an upgrade. This is a priority in additional spending." Of course! This spending will flow down to the average man. It's not going to be any crash programme work, mark you. It will be work - in the real sense. And that can't hurt the PNP. The Jamaica Labour Party (JLP) itself recognised the sting of this lowering of the tight fiscal surplus requirement and Audley Shaw immediately issued a release calling this "political interference" by the IMF so close to an election.

The JLP was relying on telling a tale of gloom and doom on its political platform, warning of the dire things to come next year under a tight austerity programme, but the IMF released this cool breeze just in time to nip that propaganda line. Of course, the narrative is that Jamaica is being rewarded for its fiscal discipline and fiscally responsible management and that is true but its timing is quite fortuitous.

The dead babies 'ruption' has provided a live issue for the JLP to whip up a sense of outrage all across Jamaica. That, undoubtedly, would adversely affect the PNP in opinion polls. You can scoff at Portia all you want and project her as a simpleton for relying on divine intervention to call the election, but she knows what she is doing. Putting the delay to call elections on the broad shoulders of the Almighty is not a bad idea at all. And in a country that is still very religious (Don't take the greater Corporate Area for Jamaica), it is no shame to wait on the Lord to hear His voice. Better than being cast as a coward not to call it when you are supposed to be fitter than young Andrew and every little thing is supposed to be all right.

Timing is everything for the next election, and perhaps more than human wisdom is, indeed, demanded. The dead babies issue is petering out. People are preparing for the season of goodwill and cheer. Yes, they will wake up back to reality in January. But by then, some projects can start or be announced. And soon, it will be election time.

The PNP can't wait too long. And Sista P is no simpleton. She will get that call from her Master in due time. As the Scripture says, "At an appropriate time, I have called you." God will never leave her nor forsake her.

In the meantime, what's happening in the JLP camp? Prince Andrew has proven that he has a strong enough instinct for survival. His fierce critic, Mike Henry, is his campaign manager. The man who that toothless woman on TV described memorably as someone who goes to his bed every night dreaming he is prime minister and who wakes up every morning with that vivid dream, Chris Tufton, is being installed by Andrew in Ken Baugh's safe seat. James Robertson, widely regarded as disillusioned with Holness, is made point man with Warmington to see that Tufton has a smooth landing in West Central St Catherine.

Chuck, who publicly assailed Holness as leader, is back in good graces and faithfully singing the party line, while Karl Samuda and Daryl Vaz, two trenchant Holness critics, are fully on board the Holness ship.

The smell of power concentrates the mind wonderfully and is an inspiration to 'unity'. Dumping Devon Wint for Tufton is an excellent political move by Holness. You might say you don't get it as Tufton is widely seen as the strongest rival to Tufton. Already, Mark Wignall, the country's most nose-to-the-ground columnist (whom I welcome to these pages), is touting Tufton.

Holness is no fool. He knows that Tufton is the Bruce Golding of this election. Just as the moneyed classes withheld their cash until Seaga bowed in bringing back Golding from the political wilderness in 2002 (though the promised $100 million never materialised then), so Holness knows than there are certain wealthy men in Jamaica who won't pump much dough until their man Tufton is given a safe seat.

Holness is pragmatic. His back is against the wall. Never mind all that might be said to be going against the PNP, Holness is not getting the big bucks and still suffers from a lack of genuine loyalty inside his own party. Besides, the private sector is very pleased with Peter Phillips' management of the economy and JLP platform propaganda ridiculing the Government's economic reform programme is having no traction with business people.

They have more confidence in Tufton than Holness, and if they see the prospect of Tufton replacing Holness if the JLP wins, that gives them hope and an alternative to the PNP. But why would Holness take that risk? Because he knows that without Big Money, he is taking a bigger risk at losing this election.

Winning elections in our system is not just about the electorate. It is about who has the money to induce and influence the electorate about who can carry out the most effective political campaign while putting money in people's pockets. 'Buying votes' is not as straightforward as National Integrity Action sees it.

It is a better risk for Holness to embrace Tufton, pull in Big Money, and then if he wins, put loyalists in key positions and consolidate his political base. Remember, Tufton is loved by the intelligentsia and the moneyed classes, who respect his intellect, middle-class mannerisms and gentlemanliness, but among Labourites, he is by no means popular. Many don't even see him as a Labourite, but as an NDM-ite, a Golding implant.

Holness has embraced Tufton reluctantly. It's called political self-preservation. Tufton should have been parachuted into that safe seat long ago, Holness critics maintain. It is only because of Holness' insecurities, they charge, why Tufton was allowed to face off with Wint.

Tufton has called for an election based on ideas and issues. That demonstrates both his sincerity and break with our backward political culture but is precisely why he is not a 'good politician'. That's the wrong road to go down. For in terms of issues, the JLP would have a hard time convincing thinking people among the uncommitted category that this PNP Government has been a disaster. The economic facts simply don't bear that out.

Yes, growth has been anaemic, but the lowering of the primary surplus target (which I, among others, have lobbied for) will facilitate just that. The foundations have been laid for growth and, fortunately, lobbying has pushed the IMF to move from its stubbornness in relaxing the targets. I don't buy the disingenuous argument that it's simple math that has caused the IMF to change.

If the lowering of the primary surplus will release $12.5 billion for growth-inducement measures into next fiscal year, and growth is projected at 2.5% next year, isn't that already moving from poverty to the path of prosperity? With many Jamaicans seeing the PNP and the JLP as Tweedledee and Tweedledum, whenever that roll call is taken, many voters will be marked absent.