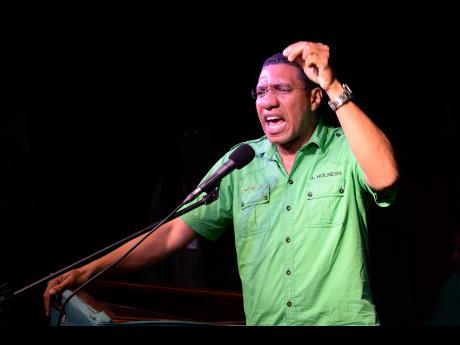 Opposition Leader Andrew Holness has put his fingers squarely on the overarching economic challenge which faces Jamaica this year.

"The challenge for any Jamaican government this year is to maintain the fiscal programme and stimulate growth at the same time", he said in his New Year's message.

In that message, he outlined, succinctly but sufficiently, what might be the primary difference between the two political parties in terms of economic management. "The present Government views the two objectives sequentially - fiscal discipline first and then perhaps growth may follow. The Jamaica Labour Party has always held the view that fiscal discipline and growth can be achieved simultaneously. This is our commitment".

Now, here we have the makings of a real, serious debate. It's a pity serious issues don't play well on the campaign trail where drawing for Kartel songs and engaging in 'ray-ray' has greater pull.

In his New Year's message, Holness continued his challenge to the economic approach of the present administration: "There seems to be an abiding belief that fiscal discipline, by itself, will lead to economic growth. Very little creativity is being applied to ways in which the economy can be stimulated to grow".

It is important to note that Mr Holness is acknowledging the importance of fiscal discipline. He says, clearly, that the biggest challenge is to "maintain the fiscal programme", while stimulating economic growth. It is welcome that our two main political parties are in consensus on the essentials of macroeconomic management.

Fiscal prudence is not optional. Where there is room for debate is how far we take the austerity programme, how we sequence our strategies, and how we creatively mix our demand-side economic strategies with contractionary measures. There has been too much of a purist approach to our fiscal policies.

Fortunately, voices in the private sector, media and the opposition have influenced national discussion on the importance of growth, not just demand compression and austerity.

There is a balance we must strive for: On the one hand, we must stop the populist madness which seeks to separate our passing of International Monetary Fund (IMF) tests and macroeconomic prudence, in general, from people's real, concrete interests.

In other words, there is a close connection between our passing these IMF tests, our remaining fiscally prudent and our ability to buy basic supplies for hospitals, import basic foods and raw materials, repair roads, provide water to communities, as well as invest in education and attract investments to create jobs.

If we don't put our house in order, economically, we have no prospect of tackling youth unemployment, crime and averting disasters in our health and education systems. Politicians should be educating people about what they can realistically expect, rather than pander to their ignorance and gut feelings.

People need to understand how the real world works. In our fantasy, make-believe world, we imagine that we can continue to live beyond our means, and Santa Claus will come from the North Pole and lend us money to continue our profligate ways and build factories to give work to our unemployed.

We can't have stable prices, a stable exchange rate, improving standards of living if our macroeconomic variables are going in the wrong direction. That is fantasy. Politicians must stop feeding people that Pablum and voodoo economics.

Self-identified 'simple man' Aaron Spellman asked in an Observer letter on Wednesday, "Say we pass the 100th IMF test, then what?" belittling the passing of IMF tests. He continued: "So far, we have 10 tests under our belt. Yippee! But how exactly are we better off? Have our circumstances changed since the passing of the first IMF test and the tenth? My guess is no. And if you were to stop someone on the road and ask them (sic), they'd probably say the same".

Well, I can tell that simple man that had we not passed those tests, hundreds of millions of US dollars would not have flowed into the island from the IMF. If things are bad for the average man now, can you imagine if we did not have that funding - plus all the funding that the IMF seal of approval has opened up from the European Union, the World Bank and other multilaterals?

The IMF seal of approval has also given investors confidence to invest here. The significant levels of investments we have been having in tourism and the BPO sector would not have come if there were not the perception, by the international community, that Jamaica was putting its economic house in order.

It is easy for the average person to scoff at the fact that our stock market was the best performing in the entire world last year. He does not see one striking difference that makes to him. We must not exploit that ignorance.

The reduction of our national debt by 20 per cent is a significant achievement and that could not have been done without some of the tough measures affecting the average person.

So there is a lot of ignorance to dispel and a lot of emotional venting that must be overcome. If we asked simplistically if we are better off today than we were four years ago, we miss the point. (The PNP's Raymond Pryce used to engage in that same simplistic line of questioning when the JLP was in power.)

You can't judge the effectiveness or usefulness of economic policies in five-year political tranches. This has been our myopic thinking over the years which has got us into this mess (Now it's Andrew Holness' time to ask that question on platforms and the PNP dare not chastise him.)

In fact, the World Bank, interestingly - another Washington Consensus institution - has been saying the same thing. Perhaps the Government will listen to them. In its Fall 2015 economic update issued last month, The World Bank advises: "The Government could leverage the success of its reforms over the past two years to create additional fiscal space for growth-inducing investments."

I hope Damien King is listening, too. The World Bank shows how this, in fact, would support the Government's economic reform programme and help to reduce its debt, which is a preoccupation of this Government.

The World Bank recommends "some promising policy options" to this administration, and I hope our finance minister is paying attention.

"The findings indicate that policymakers may be able to effect a reduction in debt-to-GDP ration by carefully balancing the focus on fiscal contraction with higher public investments that can catalyse private investment to achieve higher growth,"

Audley Shaw and Andrew Holness have been saying the same things.

"After two years of successful macroeconomic stabilisation and structural reforms, the authorities may wish to consider easing austerity measures, to some extent, in order to generate the necessary fiscal space for increased public investment ..."

The IMF itself has already acknowledged the need for this by relaxing its very stringent primary surplus requirement, releasing over $4 billion to the economy this fiscal year.

The World Bank is balanced in its analysis, noting that this administration's "expenditure-side fiscal adjustment has yielded important benefits, restoring its ability to access commercial markets and mitigating macro-fiscal volatility". Audley and Andrew need to acknowledge this, too.

We must stop talking nonsense about passing IMF tests, and not passing the people's test, as though there is no relationship (though is not automatic) between the two. But Andrew Holness is right about the primary challenge of 2016: To maintain fiscal discipline while growing the economy.