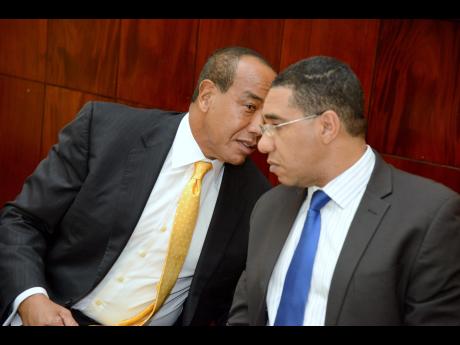 Rudolph Brown
Prime Minister Andrew Holness gives a listening ear to Michael Lee-Chin, chairman of the Economic Growth Council, at the Jamaica House launch last Wednesday. In Focus columnist Gordon Robinson has urged journalists to insist that government-appointed economic wise men “be specific about their plans and not swallow impressive-sounding predictions/promises without probing for substance”.

Picking at minor, niggling scabs like removing the British Queen won't cut it. Nothing less than full, comprehensive constitutional reform is required. Incremental change of a nation's foundation is the sanctuary of lazy political leaders, intent on deceit, and the refuge of the cowardly citizen blinded by

tradition from seeing beyond his/her comfortable couch. The uncomfortable truth is that our political leaders are content with the current constitutional situation, thank you very much. None sincerely wants real change.

Why else would a prime minister who made promises of constitutional reform as part of his campaign platform consider he has done enough by calling for the replacement of the foreign Queen with a local one (non-executive president); and seeking a three-term limit for prime ministers?

Regarding term limits, a three-term limit changes nothing, as no Jamaican prime minister has ever served more and none is likely to do so in future, especially as our volatile electorate seems anxious to boot non-performers regularly. The popular belief P.J. Patterson (prime minister three times and finished out a year of Michael Manley's third term) was a four-term prime minister is wrong. Proposing a three-term limit addresses no need other than pathetic pandering. No prime minister needs to serve more than two elected terms (the second to complete what you promised but couldn't finish during the first).

- No prime minister can retake power more than once or serve more than 12 years in total;

If we're serious about nation building, never again will our general elections become a prime ministerial toy to be used to manipulate the electorate. This is not democracy. It's a centrepiece of dictatorship.

Never again must Jamaica hold an election in the first six months of the year. Any election held in the first three months makes a mockery of Budget preparation by an incoming government, whether formerly incumbent or Opposition. The first Budget of a 'new' government MUST be timed to ensure it can reflect the winner's election manifesto. Anything other electoral result is farce, NOT election. April to June is also ridiculous for related reasons, as the pending or just-ended Budget Debate would mean no chance for the electorate to assess Government's performance with any rationality.

July is possible, but not ideal, as school terms are ending and exams may be a national focus. August/September is Independence celebrations and back-to-school time, so October (after Heroes weekend) or November must be the best time to constitutionally fix general/local government election dates with the provision for two to four weeks' postponement in the event of acts of God or the nation's enemies.

Increasing local government's term to six years (it's practically this already) and decreasing central government to four years will result in more efficient elections. Every three election cycles, both will be held together. Any postponement of any election should only be triggered by specific calamitous events or a two-thirds majority in both Houses of Parliament.

The purest democracy exists where the people pick their leaders and when every citizen can be a candidate.

Currently, political parties 'select' their election candidates via variegated, non-transparent 'systems'. Why can't we have candidate run-offs in each constituency with all registered party members eligible to vote? Why must the parties continue this specious game of 'ruling' over the members to Jamaica's detriment? Why do we allow parties to conduct candidate 'run-offs' (where only 'delegates' can vote) and then ignore the results? This is NOT democracy. It's barefaced totalitarianism.

Why can't we vote directly for prime ministerial candidates nominated by each party's registered members in fully participatory internal elections? Currently, we're restricted to voting for our local representative only. The undemocratic result is the party leader whose local candidates are most successful is automatically prime minister without polling a single vote nationally.

Why do we allow the PM, one human being, to appoint the majority of our Senate, which is supposed to be an oversight body providing checks and balances on the actions of the Lower House? Can't we see our dictators currently oversee their own work? It's no wonder we can't progress.

Senators should be elected by the people (two per parish) either by direct majority vote or by proportional representation whereby parties produce up front lists of appointees and the people vote for the parties. Five per cent of the popular vote would guarantee a seat in the Senate. This would give the NDM, or Ras Astor, a chance for a real voice in our national affairs.

It's time to break up the comfortable clique that has 'ruled' us for 54 years. Readers, look within. Ask yourselves, do you want democracy? Or do you want Jamaica to continue to be held to ransom by a few politicians who only respect you once every five years?

If you're a political activist, are you truly happy with your personal pop-off when your team wins? Or do you want fairness and equity to be Jamaica's foundation? I promise some of you might personally prosper but, until constitutional equity is achieved, Jamaica will NEVER prosper.

This is nothing but an illusory, absurd catchphrase which no amount of hyped-up, hysterical distraction disguised as ambassadorial appointments will convert to reality. These 'ambassadors' haven't suddenly appeared like genies from bottles. They've been around for years doing whatever they could to make themselves and Jamaica succeed. What more will they do now? Will some fearless reporter please insist they be specific about their plans and not swallow impressive-sounding predictions/promises without probing for substance? All that glitters ... .

If we don't pay close attention to our history, we're doomed to repeat it. Since the financial calamity of the 1970s, any limited success briefly posted in this category has come under the IMF whip. As soon as IMF leaves, our wild, willy-nilly "run-wid-it" political attitude (constitutionally permitted without check or balance) puts us right back into the fiscal hole from which the IMF tried to dig us out.

Unless we have IMF-type conditionalities deeply entrenched in our Constitution, we'll forever be going around in ever-decreasing circles until we disappear up our own economic rear ends. Debt limits must be inflexible, save for events beyond the control of the government or a two-thirds vote in both Parliaments.

New taxes should be impossible without a referendum. Increases in old taxes should be proposed by Cabinet; debated in Parliament (and elsewhere); and passed by a majority in both Houses. NO MORE NICODEMUS TAXATION WITHOUT REPRESENTATION! We MUST put an end to this casual ability to tax, tax, tax whenever there's a fiscal difficulty.

We MUST force leaders to stop chopping us with the tax axe while they are exempt from many of these taxes. Our Constitution MUST insist that MPs/ministers pay the exact same taxes we do, including on imported cars.

I could go on and on. The full has never been told. Will any government commence a national discussion on fundamental, comprehensive constitutional reform, led by a commission of independent citizens with the requisite skill and patriotic fervour to get it done? If not, will WE insist on it? Will WE take to the streets? Or are we satisfied to 'vote dem out' once every five years until the cows come home?