Edward Seaga | A massive step into the future 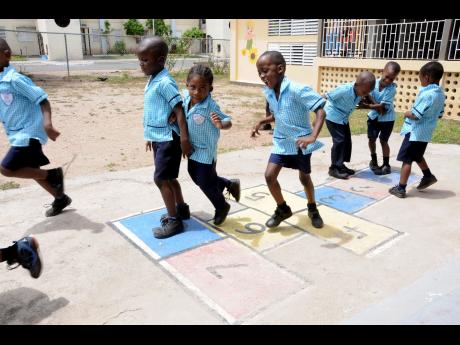 The day has come at last. I was thinking that it might never have happened after so many years of speaking and writing about the critical need for government to take over the basic-school system so that it could handle the transformation of these schools that have been neglected for so long.

Generally, many persons think of these schools for little children from three to five years old as 'play-play' schools where their little ones can be parked in the day under the care and protection of a teacher(s). They will learn the ABC and counting to 100. They are not aware that this is a vital stage in the education system. Children who are not educated at this stage can fail miserably in later years of schooling to achieve sufficient education to get passing grades and graduate from secondary schools eventually.

The reason for lack of appreciation is as a result of little understanding of the role of early childhood education (ECE) and what it can achieve when it is taken seriously. The seriousness of this phase of ECE is that it is the foundation of all education. If you are building a house, you have to start with the floor, not the rooms, nor the roof. ECE provides that foundation for the floor.

Failure to put this opportunity to use by enrolment and regular attendance is a trap many people fall into out of ignorance, or the lack of care. The result is children who go to primary school eventually at six years old have to keep up with other children who received ECE for their first step in education and have become well acquainted with the early stages of reading, writing, numeracy, social and cultural activities, among other areas of learning.

In the first grade of primary school, who do you think the teacher is going to focus on? The children who have participated fully in the ECE, who can follow what is being taught in grade one to prepare for grade two, or the one who lacks the education that should have been received in the first step in ECE? The teacher is naturally going to focus on the children who are better able to enter grade two.

Children knowing too little about what is going on because of knowledge deficiency are naturally left behind. And so it continues in each grade, focusing on those who can learn while leaving further behind those who cannot learn. Each grade will suffer in the same way, producing students who have learned and those who have not.

The stream flows right through the system until at graduation, the ratio is still, virtually, the same: 30 per cent to 40 per cent who have benefited from early schooling and can graduate and 60 per cent to 70 per cent who have not, and cannot, graduate. That is what we have to build a nation, a minority who are skilled and find employment, or become gainfully self-employed, and a sizable majority who have no skill and who, even if they find some hustling, or unskilled work, will not be gainfully employed.

There is still one more step in this critical pathway to failure - when those who fail cannot as adults pay water and electricity bills, property taxes and other such basics of life. The costs of these have to be carried by the minority who are skilled by training. Is that the way to build a nation? Prosperity for the nation won't come until every student goes through comprehensive schooling and training. The ratio, then, could be reversed to 60 per cent to 70 per cent skilled graduates and 30 per cent to 40 per cent unskilled. Then we can build a nation for everyone.

The answer to this is a proper system of ECE for all. That does not exist now. But it is now on the verge of moving forward effectively thanks to the efforts of Prime Minister Andrew Holness and Education Minister Ruel Reid. The minister gave notice recently that the process is slated to begin for Government to take over deficient schools in order to get control of the system and elevate them to the existing government infant schools' level, which operates satisfactorily.

To this major undertaking must be added properly trained teachers of which the minister says there is now one per school. Completing this programme will provide the necessary opportunities for the development of real prosperity.

What are the steps to accomplish this?

- Special financing would be needed. I have already proposed that source - the National Housing Trust (NHT), which needs more educated adults in the society to be able to deal with mortgage financing and to increase the housing stock. The NHT has a surplus of $20 billion as of this year. It can spare $2 billion per year and still increase its surplus annually.

- Increase teaching staff. This could be programmed by arranging facilities for training in separate sections of teachers' colleges and in HEART over a number of years.

- Increase the sources for equipment for ECE schools. I started the Programme for the Advancement of Early Childhood Education (PACE), which I proposed to use to get the Jamaican diaspora involved by asking groups with enough involvement in community affairs to undertake to obtain equipment for the ECE schools. This is a project that would be able to fit in with their own interests, since on a number of occasions the diaspora has shipped to schools in Jamaica furniture and equipment obtained from replacement in schools in their areas abroad.

In my visit abroad to start the programme in Toronto in 1988, I found a number of Jamaicans who were interested and were willing to serve in an organisation I called PACE of Canada. This group has worked out very well for the past 30 years with shipments regularly. I had hoped to establish many more PACE units in the USA, Canada and Britain, but the government changed in 1989 and nothing further happened.

The time has come to take a giant step into the future.