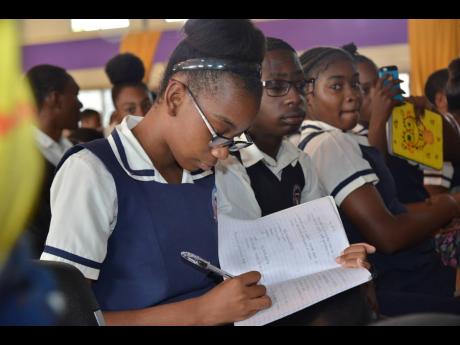 File
There must be an unremitting focus on bringing ALL school facilities up to acceptable levels so children can be assigned to secondary schools based on residential factors without the need to endure waterboarding-style torture whether called Common Entrance, GSAT or PEP.

Columnists, including your not-so-humble scribe, do a lot of writing about governments’ obligations to their citizens.

This often begs the question, “Do citizens have any obligation to Government?” Yes, they do. I’m not referring to the obvious obligation to obey the law, which, when closely examined, is really an obligation to each other enforced by Government.

Citizens’ obligation to Government is to participate in Government as comprehensively as practicable. This obligation, which is one arising AFTER Government is elected, doesn’t include voting for your favourite tribal representative. That currently flawed exercise is how we create Government. The right to vote and the power coming with it is NOT an obligation to Government or anyone else. It’s a right given by Government to the people. That right doesn’t exist in many countries or, if it does, it’s diluted or obfuscated, sometimes to the point that it doesn’t truly exist.

So I’m not talking about voting. Not today.

Every citizen of every country, regardless of governing philosophy (e.g. Capitalism, Socialism, Communism or a hybrid) or method (e,g. Democracy or Totalitarianism) owes its Government a duty of participation. No matter where you live; no matter what political philosophy your Government espouses; the fundamental principle that Government is by the people for the people remains inviolate.

The burning question is: “How do I participate?”

It all begins with vision. Every citizen must develop, for him/herself, a vision of what he/she wants the country to become. This isn’t easy nor is it something you can copy from Netflix. Your vision for Jamaica must be yours, developed as a direct consequence of your life experiences and whatever “education” you’ve been fortunate enough to receive, especially at the College of Cruel Knocks (COCK).

Find a quiet place (I recommend the Tushy). Meditate on your COCK lessons and ask yourself how can Jamaica change so your children and grandchildren’s lives can be better? What can and should Jamaica provide that no individual can in order to make Jamaica an ideal place for them to live and, more importantly, want to live?

When you’ve developed your vision for Jamaica, write it down. Read it. Again. Again! That’s the only way you’ll see what needs to be added, subtracted or refined until it becomes a no-frills action statement.

Next step is to think through what Jamaica, as a nation, needs to do to actualise your vision. Don’t slapdash this part. Feel free to seek guidance on probable methods and technical details from people you trust and with skills you need. Feel free to form or join an association of persons with similar vision or who are amenable to adopting yours.

When you have a vision and devised methods for Government to make it real, your mission, should you decide to accept it, is to do whatever it takes, within the law, to ensure your Government works toward that vision. Agitate; lobby; protest; ensure you are heard and seen. Do NOT take no for an answer.

If you aren’t prepared to commit to this process; if all you want to do is vote for your party’s MP candidate once every five years and then hustle what you can from Jamaica’s scarce national resources, you’ve failed in your duty to your country, your Government and your fellow Jamaicans.

I have a vision for Jamaica. My Jamaican vision is one that takes my grandchildren from cradle to grave in a country that cares for them and in which they can become the best of themselves.

I envision a society where every child has an equal opportunity to acquire the same level of education as any other; where every adult has a real input in Government beyond a bi-decade vote for an MP so they can trust but verify; and where EVERY senior citizen can live their twilight years as safely and healthily as possible.

THAT’s the society we deserve and upon which we must insist.

How can this be accomplished?

1. NO CHILD LEFT BEHIND

Jamaica needs an education revolution. The current system is outdated, under-resourced and pretty much useless. There’s no point trying to educate children in schools boasting wide disparities in teacher qualification; facilities and capital. We’ll soon arrive at the embarrassing national crossroads where truancy offers a better education for life than attendance at school.

So we must work towards having schools that offer the same level of education and all necessary facilities. It’s backward nonsense to have Grade Sixers sit a traumatising exam while they strive to “get into” the “better schools”. An education system that matriculates functional illiterates (even one or two) is NOT education. Since successive governments don’t have the will to make any radical change, it’s up to us to force them to do what must be done.

We must insist that we begin to work towards actualising a vision for every teacher at secondary level to hold at least a master’s degree and be paid accordingly. Properly qualified teachers must be the highest-paid public servants (including substantial retirement benefits) because they do the most important national job. Oh, and btw, let’s put a stop to this incongruous rubbish that fixes MPs’ salaries to the highest-paid public servants. Don’t you find it amazing that MPs regularly bawl about their low pay yet there’s always a multi-entry contest whenever a seat is up for grabs? Why such an anxiety to audition for such a low-paying job?

Things that make you go hmmmmmmm.

When I was a partner in a large law firm (with rotary telephones), the partners ensured salaries of senior associates exceeded partners’ salaries. This was for two reasons. Firstly, because the associates’ talents were needed for the firm’s overall well-being. Secondly, partners participated in profits while associates did not.

So think about that and pay teachers more than MPs.

There must be an unremitting focus on bringing ALL school facilities up to acceptable levels so children can be assigned to secondary schools based on residential factors without the need to endure waterboarding-style torture whether called Common Entrance, GSAT or PEP.

The education revolution must include introducing civics and comprehensive sex education in schools so adults are equipped to hold their governments to account and to understand how to interact acceptably between the sexes.

This can only happen with a radical change in the Westminster system of governance under which we currently suffer. This transparent twaddle of voting once per five years for an MP and then having everything else thrust upon us by a monarch in prime minister’s clothing has to stop.

We must separate Government from Parliament; give us a vote for MP and Senator; constitutionally empower Parliament to oversee Government and pass laws; restrict Government size and parameters; and define a MP’s duty as representative of the people and not of any political party.

We complain religiously about the constant brain drain but one of the main reasons young people migrate for purportedly greener pastures is that they see the way we treat their grandparents and don’t want to fall into that same trap. So they go to countries that tout welfare assistance for the unemployed; reasonably available medical insurance; effective national insurance and health schemes; and free medical care for all senior citizens.

What do we do here? We have instituted no-user-fee policies for every patient in every public hospital instead of targeting relief to those who need it most, namely the aged and infirm who spent their lives working and paying taxes and who often go to their graves owing Government some debt or the other.

No person over 70 should pay a dollar in tax. Government should provide free healthcare and a regular pension so they can live dignified lives.

I’ll NEVER stop advocating for the realisation of this vision. I will NOT vote for any MP candidate who comes with empty promises so I can help him/her dip into the national trough without check, balance or sanction. I will NOT vote for any MP who won’t change the system that bars me from participation in Government, yet allows individuals appointed at whim without independent vetting control over the public purse. I will NOT contribute to glorification of politics alongside contempt for children and seniors.

But I WILL pursue my vision for Jamaica. No. Matter. What!