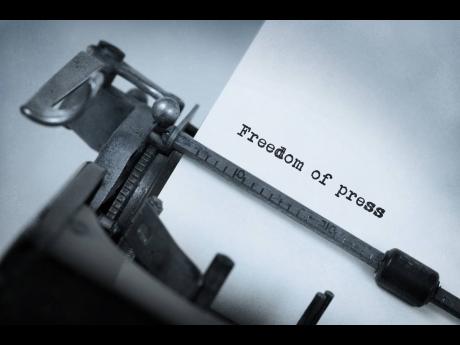 Until media remembers and recommits to its glory days (1970s/80s) when opinion and journalists’ sources were stoutly defended without fear or favour, I’ll believe we’ve no press freedom in Jamaica.

Recent events force me to return to the vexed issue of press freedom.

Unfortunately for readers (both of them), this isn’t the first or second time I’ve pounded on this discordant drum. By now, most civic-minded citizens should know that in 2011, when the new Charter of Rights was passed, Parliament specifically declined to enshrine freedom of the press as a constitutional right. The political three-card trick used at the time was to ask, “Why do we need specific press freedom if we have freedom of expression?” It caught plenty of us (me included) off guard.

There is so much more to the demeaning downgrade of press freedom to freedom of expression. Limited access to information about possible abuse of political power is only one. In addition, the press must be free to use such information, however received, without fear of legal or political reprisal.

Freedom of expression, a cherished right (bolstered in the Charter by Freedom of Opinion) that was so effectively used by Jesus Christ to spread The Word circa 30AD, is itself excessively diluted in countries mimicking Merrie Olde England. These uncommon-wealth countries blindly adopted elitist English common law concepts of defamation, putting an often impossible onus on free expression practitioners to defend expression or literally pay the penalty. Doubters should read Leon Uris’ classic docu-novel QBVII.

In the USA, where freedom of the press is an enshrined constitutional right and freedom of speech cherished in law and in practice, only issues of national security, plagiarism, or obscenity (narrowly defined) can fetter free speech. Where the offended party is a public official, no defendant has to prove the truth of his/her opinion unless the Claimant can prove malice (not just spite but any improper motive). So once the free press isn’t malicious (in law), it’s free to err and be corrected or self-correct without penalty.

This would also be the case in Jamaica even with our bastardised Westminster governance if only media practitioners understood their role as protectors of governed from governors. If they did, they would fight fiercely (including in court) for the basic principle that public officials are employees of every citizen. As such, published news reports about any of them ought, even in Westminster-style governance, to be covered by a qualified privilege as valid as conversations among employers. Again, malicious publication can’t be protected in any universe.

Let’s not quarrel, let’s not fight

Let’s get together, we all can unite

Then take off these chains from off our feet

down freedom street (everybody knows)

On August 21, 2021 (Protecting freedom of speech), I returned to the subject:

“So what’s ‘Freedom of Speech’? Like every constitutional freedom, it was constructed as protection against excessive governmental interference and is simply defined as the right to express opinions without government restraint.”

This essential protection doesn’t only exist in the Constitution. Too often in Jamaica, enforcement of constitutional rights requires the patience of Job, extraordinary courage. obstinacy, and endurance (not to mention deep pockets), none of which are readily available to Jamaican journalists. Freedom of the press can’t be implied into any written Constitution nor can any judgment of any court that deviates from plain constitutional text to try to do so stand the test of time. Like Roe v Wade (which, after the hoopla recedes, can be recognised as a judicial extrapolation of 14th Amendment rights to equality before the law and privacy that itself over-ruled decades of contrary statutory law and judicial opinion), it will be subject to over-rule by a differently constituted and philosophically contrary court.

Judgments from England on constitutional law are almost useless in countries with written constitutions for the reason England has no such creature. Every act of the UK Parliament, including the 1967 Statute legalising abortion, has constitutional effect.

CAN’T DEPEND ON CONSTITUTION

But like freedom of expression, we can’t depend on the Constitution alone for protection of press freedom even after entrenchment. Press freedom must also be defended in media house boardrooms and Press Association of Jamaica (PAJ) councils. Where there’s no constitutional right to pressfFreedom, PAJ/media bosses’ responsibility is even more crucial.

Recently, a popular Sunday columnist wrote a sensational piece of opinion-cum-reporting that seems to have stepped on national and individual corns. Social media lit up with “reports” a lawyer had written to the media house. The sensational bits were removed from the online edition and the column hasn’t appeared since. Whether the sabbatical is enforced or is by choice is neither known nor relevant. The incident, rightly or wrongly, reminded me of the gutlessness too often evident in media bosses’ gastrointestinal tracts.

“… Trust me. There’s nothing that frightens a Jamaican media entity more than the threat of a libel or defamation suit. Merely mention the word ‘libel’, and the editors will be reduced to shivering, quivering wrecks willing to toss freedom of speech out the window along with the baby and its bathwater.

“What can one do but laugh at this absurd state of affairs?”

Annie, as a victim of media’s contagious rush to placate, I can’t find any humour in this serious defect in Jamaican journalism. Unless some personal or professional malice is established, I expect editors, managing editors, and board members to protect journalism no matter who is offended by whatever is published. Fear of defamation awards has infected media since the 1987 Tony Abrahams case (Privy Council decision 2001). It’s time to look that bogeyman directly in the eye and tell him, as Brutus told Caesar (in Latin of course), “Pishenzee Offenzee!” Media mustn’t only acknowledge but commit to its true mission to expose governmental abuse whenever it occurs. If media does this, as the Washington Post and the New York Times did in the now famous Pentagon Papers case, it’ll be surprised at how many of these blustering blowhards shrivel up and go away. Or lose in court.

Let me tell you people

United we stand, divided we fall

Respect your brothers, sisters and all

Let’s not deal with illiteracy,

Work it out intelligently

It must be a vision ‘cause there’s no change in sight.

I see a big, big street where all hands meet.

It must be freedom street;

Ken Boothe is one of the finest, pure singing voices in Jamaica’s history. He consistently churned out chart-topping hits (1960s-’70s), and in his prime, his live performances electrified audiences. I recall The Old Ball and Chain and I seeing him open a show for the Chi-Lites. He brought the house down and set a high bar for the international stars to hurdle. His smash 1970 hit Freedom Street (produced by recording legend Leslie Kong) was the lyrical product of the brilliant Harris “BB” Seaton (lead singer of top harmony group the Gaylads). Ken is also one of the most humble, thoughtful patriots in the helter skelter of the music industry and one of Old BC’s favourites.

Press freedom begins, in theory, in constitutions and courts. But real press freedom is created, nurtured, and protected by journalists and their bosses all prepared to tell truth, whole truth and nothing but truth to power without regard for consequence.

 Gordon Robinson is an attorney-at-law. Email feedback to columns@gleanerjm.com.