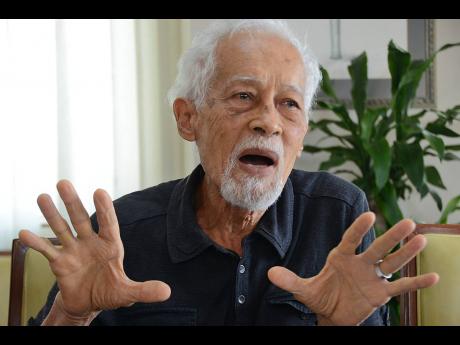 The Jamaica Stock Exchange (JSE) rarely tolls its bell. It is a symbolic gesture that this institution offers at the opening of the market when they have something significant to celebrate. On July 12, Horace Levy was in focus because Jamaica: Fractured Nation, Vibrant People, the book he recently published, had caught the JSE’s attention and the bell was tolling in his honour. I was invited to introduce Horace to the hybrid audience attending this august ceremony and I was hard pressed to confine my endorsement to the brief time available.

I am sharing these thoughts in this space because, as an educator committed to the mandate of critical thinking and problem solving, I am obliged to recommend Horace’s book as required reading for students at all levels - from primary through to university; educators; activists/advocates; artists; politicians (especially); civil servants; non-government organisations; the private sector; the media; faith-based organisations, the general public – you get my drift. Everyone, literate or not, should gain access to this seminal text. It will make you question the concept of “die-hard” politics and wonder why sensible people have chosen this blind-Bartimaeus route to defining the business of democracy.

I have had the honour of knowing Horace in several different contexts all of which coalesce to define him as the quintessential academic and advocate who is most qualified to have provided us with the sharp and succinct insights into the intersecting elements that make the Jamaican society tick. One of the most memorable projects we worked on, with Horace as team lead, was the collaboration between The University of the West Indies and the World Bank, which provided the data to establish the correlations in the country between poverty and violence. The publication, They Cry Respect, testified to the collective production entailed in this Participatory Action Research (PAR) project and Horace’s expertise as a master synthesiser. His sociological applications make this a go-to text on the two subjects, to this day.

When I was social development manager at the National Housing Trust on the Inner-City Housing Project, I would again work with Horace, who, along with Patricia Anderson, provided the research that informed the direction of that P.J. Patterson initiative to address the housing shortage that contributes to inner-city underdevelopment and the resulting hesitancy of businesses to invest in the downtown Kingston district. Horace, Peta Ann Baker, and I formed a panel to present lessons learned from multiple approaches to social housing in Jamaica at a Caribbean Studies Association conference held in St Kitts.

Since his life has been so profoundly political, it is easy to simultaneously introduce Horace and the book. Horace’s multiple incarnations meander throughout the text and testify of the broad range of experiences he has garnered as an academic and as an activist/advocate. As a sociologist employed for many years to The University of the West Indies, Horace’s intellectual footprint has been indelibly imprinted on the minds of thousands of students eager to learn from someone who is a storehouse of the irresistible combination of fertile thought and strategic action.

Horace’s intimacy with the evolution of Jamaica’s ideological, political, economic, cultural, and social administrations has enabled him to be a keen analyst of the contradictions of state formation, governance systems, political economy, and the impact of the classist interventions that persist in policy and praxis. The book shows that he understands why successive governance models have failed the majority of Jamaicans. He cuts to the chase and names the racialisation and class-specific factors that act as barriers to the vaunted ideals of social justice and sustainable development. He indicts the powers-that-be for failing to exercise the requisite political will to implement radical reforms, such as those recommended by the Commission of Inquiry into the Tivoli Gardens incursion, as measures to heal the cankers undermining citizen well-being and security in Jamaica. He held up the Tivoli incursion as a mirror of the excesses practised by the security forces which, he says, have failed to grasp the fundamentals of social capital formulation as a replacement of the repressive and violent approaches being applied. He recommends that serious fiscal investment is required to staunch the human haemorrhage, which distinguishes Jamaica among the most violent counties in the region.

Horace weighed the eight prime ministers who have held that office over the six decades of independence and found them all wanting in measures of social justice. He shows that successive administrations have squandered numerous opportunities to address the material concerns of the African majority. He is frustrated that not even the ongoing violence and skyrocketing murder rate have been sufficient grounds for self-seeking politicians to agree on a common approach for fighting crime. The People’s National Party’s (PNP) refusal to join with the Jamaica Labour Party (JLP) to extend the States of Emergency as a crime-fighting mechanism is a case in point of this ragged approach to public rehabilitation. Horace’s suggestion that only collective political and pragmatic solutions will wash, is timely.

Horace did not need to search for substance to back up his arguments because he has copious experiences from which he drew and infused the text with keen insights. The sections on the Social Action Centre and Peace Management Initiative were clearly autobiographical. His reference to the work of the Catholic Church provides confession of the period of service that Mr. Levy offered as a priest before his marriage to Jenny Jones, with whom he fathered three children. This personal pivot demonstrated his existential agility and capacity to embrace change. Horace’s deep involvement in the social justice struggles of marginalised cooperative workers at the Bernard Lodge, Frome and Monymusk sugar estates shows his commitment to crafting sustainable development pathways that benefit the poor and excluded. This conjoins his references to Jamaicans for Justice where his service has also shone.

The book ends with a succinct summary that is a very useful guide for reflexive review of the lessons learned from the text. We would do well to heed Horace’s clarion call for social democracy, which as he says, is a halfway house between capitalism and democratic socialism, the political sentiments espoused by the JLP and PNP respectively. The dialogue he recommends is the obvious next step. And the hope he offers, inspired by cultural practitioners like musicians and sports performers, is a beacon for engendering optimism. Let us watch to see if the divided politicians have the belly to heed his measured advice.