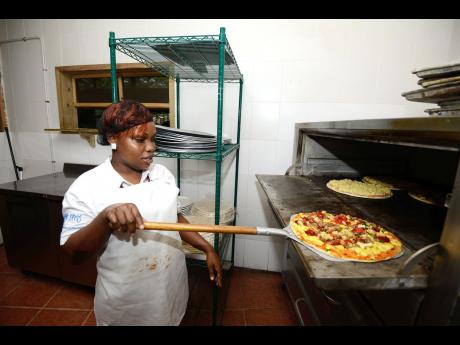 What started out serving soups and salads, is now one of the best seafood eatery on the north coast. 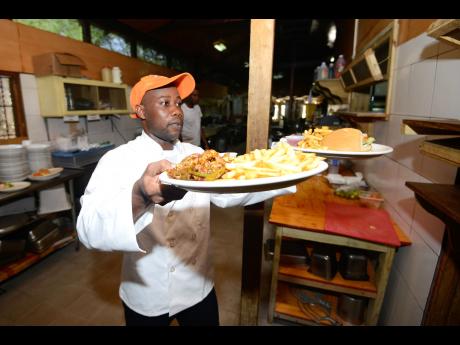 Everything Evert 'Ron' Watson sends out from the kitchen is finger licking good. 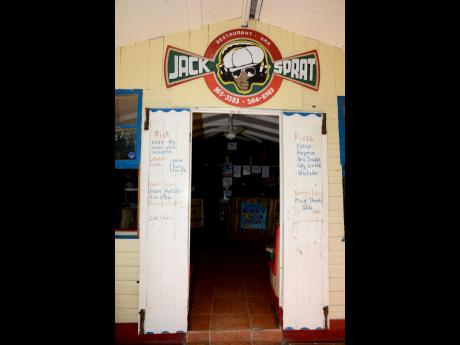 The entrance to Jack Sprat from the sea with the door boasting some of their delicious offerings. 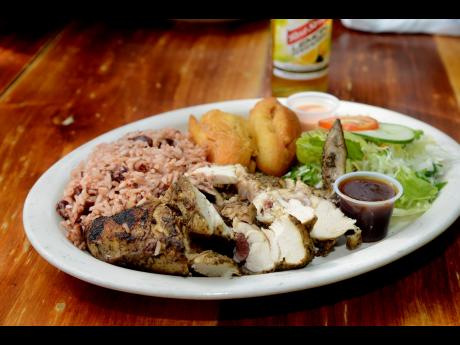 Traditional jerked chicken has never tasted so good. Served with festival and rice and peas. 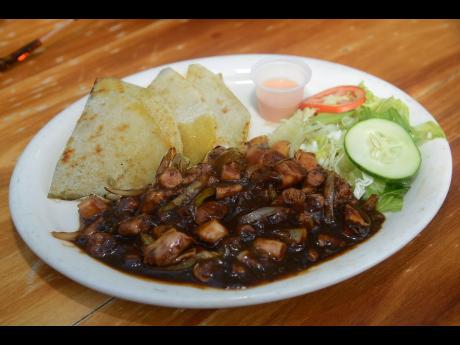 Jerked calamari (seapuss) with roti and a serving of fresh vegetables. 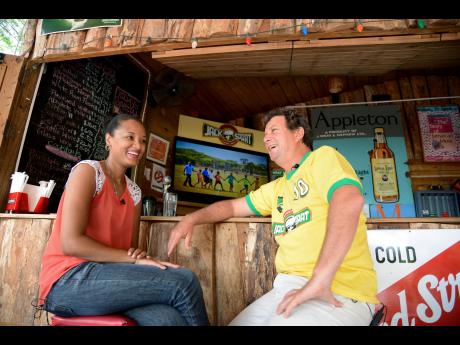 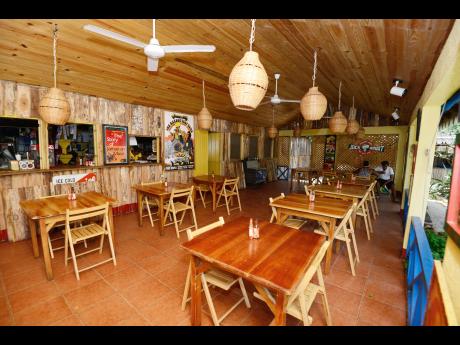 The seating at Jack Sprat has quadrupled since it opened 13 years ago. Diners of the option of dining on the terrace on the inside. 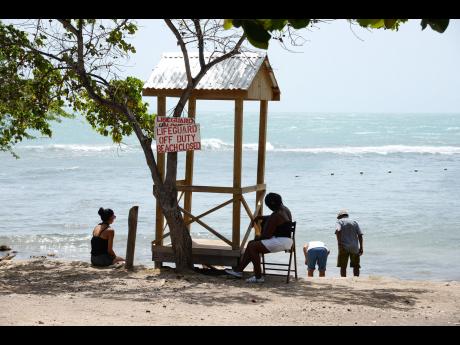 Jack Sprat is situated on the island's beautiful south coast. 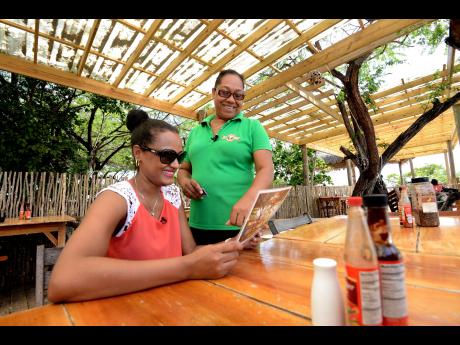 Manager Cassandra Powell (standing) points out some of the best offerings on the menu to Lifestyle Editor Nashauna Lalah. 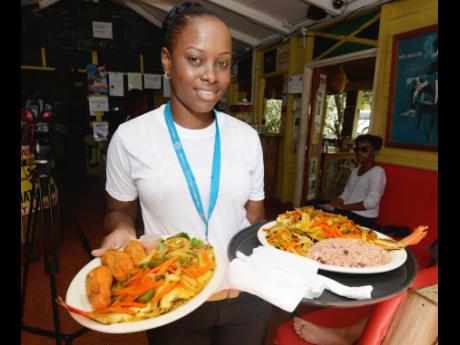 Amoya Vassell is going to make some customers very happy with these healthy servings of steamed fish. 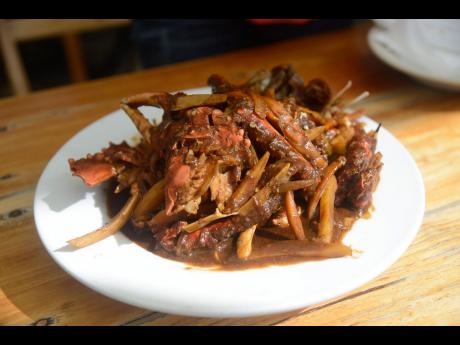 No crustacean undersea can come close to this jerked crab when its smothered in Jack Sprat's secret sauce. 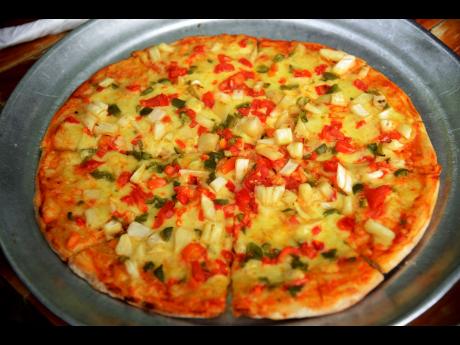 Food lovers will tell you that the real treasure in Treasure Beach, St Elizabeth, is Jack Sprat.

The quaint seaside eatery is next door to the famed Jakes Hotel, and has developed a reputation for serving delicious food with unbeatable south coast hospitality.

On a sunny Wednesday afternoon recently, owner Jason Henzell sat with Food at the bar of the restaurant, glass of water in hand to combat the sweltering summer heat, reflecting on the beginning of Jack Sprat.

"I started Jack Sprat because a restaurant up the road had closed down and we just thought that Treasure Beach needed more dining options. This was my cousin's house and she asked if I wanted to lease the property. I thought about it and thought about it, and I said, 'Only if I can turn it into a restaurant'."

It wasn't an immediate success, however, as even Henzell, who already knew a thing or two about success as the owner of Jakes Hotel, soon found he had more to learn.

"To be honest with you, we had it totally wrong in the beginning. We wanted to do something that no one else had done, so we started with soups and salads. There were days when not one single solitary customer came," he said. "And one day I said, 'You know what, let's do seafood'. I didn't want to do seafood in the beginning because I was very friendly with Blackie from Little Ochie, and I stayed away from it and didn't want to compete with him. But persons kept saying you are far away, you not really competing."

Things started to change. "A few months after, a friend from America offered me a pizza recipe. I said 'No, I don't think people are going to eat pizza in Treasure Beach'. And he said, 'Jason, I have been offered big bucks for this and you are my friend, so take it'. I did so reluctantly. Can I tell you that (today) I will be walking in Kingston and people say, 'Jack Sprat, the pizza wicked!' So pizza and seafood are what we say we are the best at, and it has really made a name for itself," said Henzell.

The Jack Sprat full-house pizza is perhaps the most talked-about item on the restaurant's extensive menu.

The 13-year-old restaurant has grown from a humble start into a staple of Treasure Beach, loved by the community and sought after by visitors because of its scenic, welcoming setting and tasty offerings.

Henzell told Food: "I wanted to call it Sprat because it was a small restaurant - it was a small fish. My mother said, 'No, man. Jack Sprat!' And we used the Jimmy Cliff image from The Harder They Come (the cult classic Jamaican movie directed by Jason's father, Perry Henzell) and we put the earphones on him because it's about food and music. We have a lot of concerts here. We have a big New Year's Eve event. When Calabash (a famed literary event) is kept here, for days in advance we are preparing food for 3,000 to 4,000 persons."

When asked what some of the standout features of Jack Sprat were, Henzell didn't have to consider it for very long. "I think the freshness of our seafood. Our staff - they are very warm, very welcoming. Also, the music we play and the fact that we have a deck right over the sea. It's much more than just food. I always say to my staff. 'Remember there are many other places that sell food, and maybe cheaper than us, so we have to go above and beyond because the economy is tough'. They get that. They makes people feel important. They are just doing such an amazing job."

The staff, no doubt, has played a great role in quadrupling the restaurant's seating over the years. For anyone who can't get a seat, though, Jack Sprat offers pizza delivery within Treasure Beach and its environs.

"We have become like the core of entertainment in Treasure Beach - World Cup parties; we do a movie every Thursday night and we serve popcorn, and there is no charge to come in. We also have concerts sometimes that are free."

Take our word for it - from the colossal King Fish, to the seapuss (octopus) in all its various forms and variations, everything that comes out of that kitchen is finger-licking good. My recommendation is that you order everything with the word jerk before it. You can't lose.