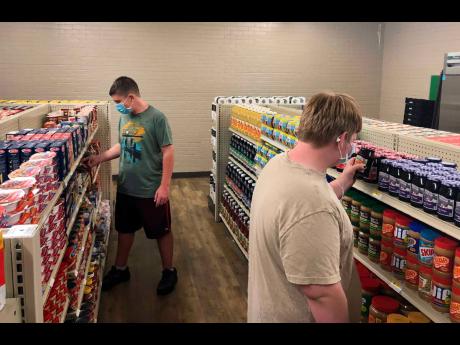 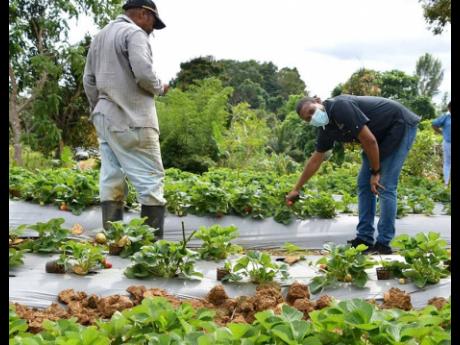 Contributed
Minister of Agriculture and Fisheries Floyd Green (right), looks at strawberries being cultivated by Cecil Robe on his farm in Rock Spring, south Trelawny, during a tour of the area on Friday.
1
2

Farmers in South Trelawny are being encouraged to intercrop yam and strawberries.

Strawberries is one of 12 crops being promoted by the Ministry of Agriculture and Fisheries under its Production Incentive Programme.

Speaking at a meeting with farmers at Albert Town High School in Trelawny last Friday, Minister of Agriculture and Fisheries Floyd Green, while acknowledging that Trelawny farmers are known for their expertise in planting yams, stressed the importance of diversification to ensure a better return on their investment.

Noting that Trelawny used to be a major strawberry-producing area, Green lamented the reduction in production, stating that this has been replaced with imports.

The agriculture minister said the ministry is looking at import substitution by getting strawberry production back up in the areas that are known for growing strawberries and would provide technical support as well as planting material.

Under the Production Incentive Programme, Trelawny is one of three parishes being targeted for increased strawberry production.

A team of scientists at The University of the West Indies (UWI) and international collaborators have conducted an interdisciplinary study that found that there are potential medical benefits in a favourite Caribbean fruit — guinep. The study was published in the highly respected nature research journal Scientific Reports.

The study, titled 'Hypotensive and antihypertensive effects of an aqueous extract from Guinep fruit ( Melicoccus bijugatus Jacq ) in rats' showed, among other things, that guinep reduced blood pressure in rats through its effects on cardiac output and heart rates.

Of importance, the study found that the guinep extract did not show signs of toxicity, suggesting the potential for safe medical usage. These results complemented those of a prior study, which established that guinep also reversed and even prevented experimentally induced damage to the muscular tissue of the heart. Advanced analysis further revealed the presence of several medicinal compounds in guinep extracts with exciting cardiovascular and biological activity responses. These included antioxidants like vitamin C and related compounds, phenolic acids, flavonoids, fatty acids (oxylipins), and terpene derivatives.

Traditional school stores might offer snacks and knick-knacks, school gear and notebooks — but the one at Linda Tutt High School in Sanger, Texas, has a very different inventory and clientèle.

At Linda Tutt, you can get everything from produce, milk and eggs to pasta, peanut butter and canned goods to dishwasher soap and laundry detergent. Students and staff can shop there, but on Tuesdays the store is open to the community.

And it’s all free.

“I like seeing their smiles, seeing how appreciative they are, and knowing that they are thankful that we’re doing something like this,” said Hunter Weertman, a 16-year-old junior who stocks shelves and takes inventory at the store housed in an unused art room. It has been open since November.

The idea is to provide students with job skills, and at the same time help students, staff and local residents who are in need. And the store has one more purpose: teaching the youngsters the value of giving back to their community.

Seattle has joined other cities in approving extra pay for grocery store workers during the COVID-19 pandemic.

The city council on Monday approved legislation requiring large groceries to pay an extra US$4 an hour in hazard pay.

The Seattle Times reports the legislation passed 8-0, clearing a requirement that it receive a three-quarter supermajority in order to go into effect immediately. Mayor Jenny Durkan called the policy “a strong step forward in Seattle’s recovery".

The new requirement applies to grocery companies with more than 500 employees worldwide and to stores larger than 10,000 square feet. It does not apply to convenience stores or farmers' markets.

Covered businesses will have to pay their retail employees US$4 an hour on top of the pay they currently receive as long as the city’s coronavirus civil emergency, first declared in early March of last year, remains in effect.

The California cities of Los Angeles, Long Beach and Berkeley have within the past month forwarded or approved similar 'hazard pay' boosts for grocery workers.