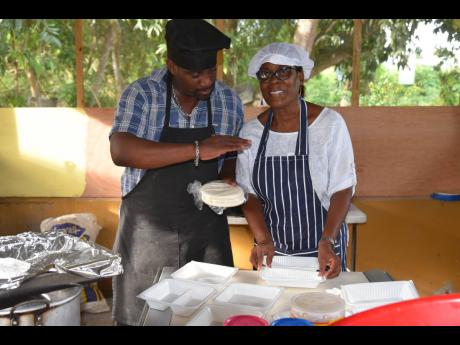 Herbert McKennis
Kern Spencer and his mom, Meggie Spencer, taking stock of the bammy at the St Elizabeth Crab and Seafood Festival. 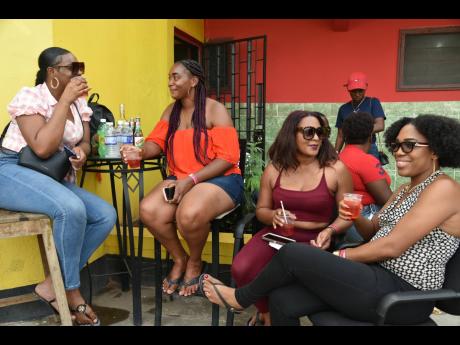 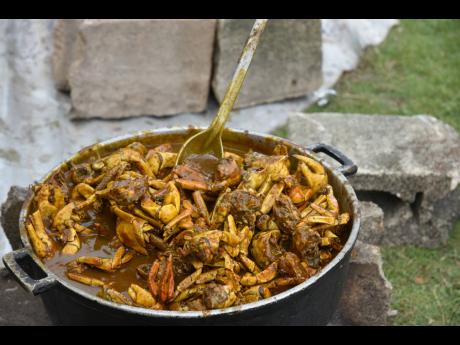 Herbert McKennis
Curried crab being cooked for the patrons. 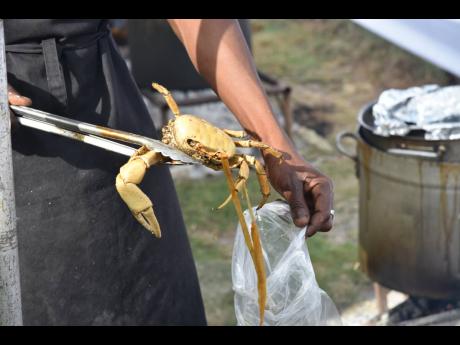 Herbert McKennis
Boiled crab that was available at the St Elizabeth Crab and Seafood Festival. 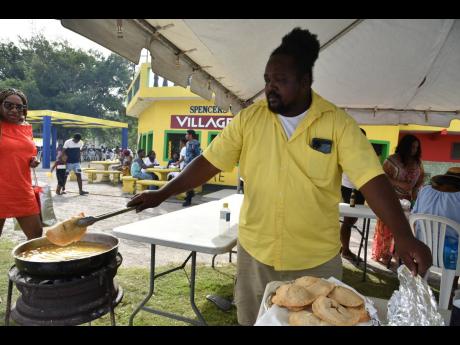 On a day when the rest of the country laboured on buildings, pedestrian crossings, parks, and markets, Kern and Meggie Spencer created culinary magic at their St Elizabeth Crab and Seafood Festival at the Village Café in Luana on Labour Day.

Theirs was a labour of love, and some 160 dozen crabs. Many from the bordering parishes of Trelawny and Westmoreland gave credence to the birth of a festival that surpassed the expectations of the mother-son duo.

By 5 p.m., they were worried they would not have enough food to last them into the night, but they also had crab catchers on standby. Partnering with Trelawny crab specialists Jermaine Morris and Rose-Marie Codner, the combination saw the savouring of the crab patties and crab fritters by patrons relishing the moment.

Within hours the crab patties were devoured and Jermaine introduced Indian roti to the offerings, giving food lovers the option of dipping them in the curried gravy. “The roti is used to clean the plate, it saps up all the flavours of the curry,” said Kern, who admitted being stung by jealousy when the festival idea was born.

“We knew our breadbasket parish needed a festival of sorts. There is the Montego Bay Jerk Festival, the Food and Drink Festival in Kingston, and we felt St Elizabeth needed something that would lend a national stature to the parish,” he told The Gleaner.

Hoping this year was the year of experimenting, Mrs Spencer said the response by the community has given them tremendous hope for sustainability.

Both of them revealed how difficult it was to find the paddle-shape-legged crustacean, which is usually in abundance, particularly during May.

“When I was growing up with my grandmother Miss Serena, crab would be running up and down all over Black River, and that’s why we kept the event on the border of Luana, Black River, and Junction,” stated Kern.

Those days the area was a haven for crab, he added. But this year, he was forced to go out of the parish to Trelawny, and Westmoreland to get the numbers he needed.

With the focus on local acts, Kern said the idea was to have entertainers from the parish perform as well, because it’s all about the brand, St Elizabeth. “We are creating memories and experiences that will attract tourists, with the aim of having the Ministry of Tourism buy in and join the effort and assist next year,” he expressed.

For him, pairing the local attractions gives him the opportunity to speak of how bountiful not just the food of the parish is, but the awesomeness of “Lover’s Leap, which is historic, with a great story behind it. Holland Bamboo, which is renowned; and YS Falls, which is unspoiled; and Black River, the longest river in the country and is famous for its safari,” said Kern.

Morris fed the crabs fruits, vegetables and bush before cooking them, noting that they needed a certain type of diet to clean their insides prior to being consumed.

The crab expert, who cooked his food on logwood and swears by it, relocated his entire crew to St Elizabeth for the event. The excitement was evidenced by the response to his crab patties. “We pick the meat out of the crab shell, we season it, and place it in a patty wrap and fry it,” he told The Gleaner.

His crab fritter is done similar to the salt fish fritter, and he couldn’t decide which had the better taste. “It depends on the taste buds and the preference,” he stated, as the heat from the wood-infused stove stirred the fire into the air.