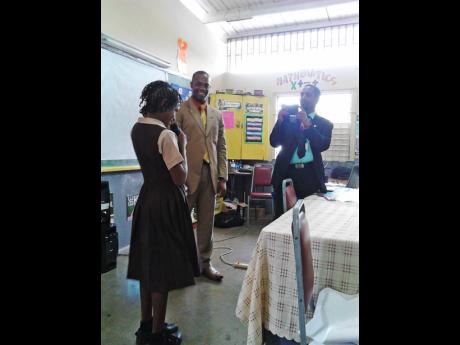 The Major Organised Crime and Anti-Corruption Agency (MOCA) yesterday launched a new strategy in the fight against the lottery scam in western Jamaica, by taking an education campaign about the practice into four schools in St James.

A team of officers from MOCA, led by the programme's convener, Corporal Kevin Watson, took the initial leg of the programme to the Glendevon, Salt Spring, Green Pond and Albion primary schools, where they engaged the students in activities, teaching about the dangers of scamming.

The lottery scam, which came to prominence in western Jamaica in the early 2000s, has conned United States residents out of millions of dollars, after the participants have convinced them to pay fees in order to collect supposed lottery winnings.

"Today, this is really a social-intervention programme we are doing here Ö . This comes out of a press release we did some time ago, with a 10-year-old girl who was seen leaving a premises with evidence in a knapsack on her back," said Watson.

"We have always been reactive by going out there on operations based on intelligence, but now we are seeing it necessary to have a proactive approach to combat lottery scamming, and this approach involves going into the schools.

"We realise that we have to start with the young, impressionable minds, and start curtailing this activity before it transitions from a socio-economic problem into a cultural one, and so that is why MOCA saw it necessary to put on this kind of programme," Watson continued. "We believe these kinds of social-development programmes are needed now, especially in Jamaica, to combat lottery scamming."

Watson noted that over the next few weeks, the programme would be carried into other schools in the Area One Division, which includes St James, Hanover, Westmoreland and Trelawny.

"We will be continuing this for another seven weeks or more because we will be targeting the high schools next, and also the community colleges. This fight is a continuous fight, and this proactive approach is going to be continuous," said Watson. "It (lottery scam) has driven major crimes up, especially gun-related murders, and we believe that in approaching it from this way, we will be creating a better future."