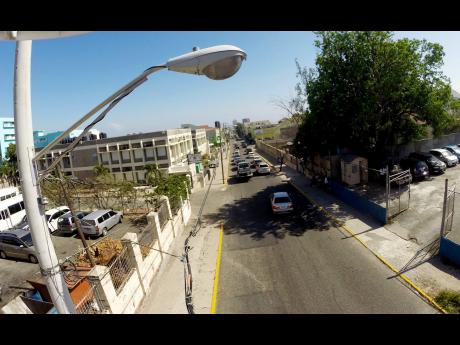 A street light on East Street in downtown Kingston. The Kingston and St Andrew Corporation did not respond to an Access To Information request for data on monies owed for electricity services.

Payment for street lights are the responsibility of the Ministry of Local Government and Community Development, while the general costs are paid by the councils.

Of the parish councils which provided data in response to an Access To Information (ATI) request from The Gleaner, the St Catherine Parish Council had the largest bill, with its arrears for street light as at January 3 standing at a whopping $924 million.

The St Mary Parish Council had one of the other relatively large bills, at $225 million, even though all of its general accounts were paid in full.

This was due to the fact that its street lighting bill had been in arrears since April 2013.

Another standout was the St James Parish Council. Its general bills stood a little over $5 million and its street light bill was booked at $269 million.

The Clarendon Parish Council, which disclosed that payment for its general electricity costs valued at $313,950 was being process at the time they responded to The Gleaner's ATI request, gave no indication as to the status of payment for the $254 million owed for its streetlights.

The Hanover Parish Council and the Portmore Municipal Council were the only entities to report that they had no outstanding amounts for the JPS, in terms of general electricity costs. However they did not submit data for street lighting costs.

The Kingston and St Andrew Corporation did not respond to the ATI request.

Noel Arscott, minister of local government and community development, told The Gleaner that the bills for the streetlights have not been paid in full as a result of a number of issues.

"Resources are limited so we have to balance our obligations and we also have issues with street lights that are not working that we are being billed for," Arscott said.

He also pointed to the low compliance rate of property tax collection which is the main source of funds for payment of street lighting bills.

Another factor affecting the ministry's ability to pay is the discontinuation of a deficit financing arrangement from the Ministry of Finance, a move which Arscott attributes to the austere conditions under which the Government is currently operating.

The minister disclosed that a payment of $700 million was made last month and that he has been in negotiations to introduce LED and solar energy street lights.

He said these would significantly reduce the country's street light bill.

In an emailed response to The Gleaner, Kelly Tomblin, president and CEO of JPS, said the Government has been making good on payment.

"We are working with the Government to find solutions to reduce their arrears and, as the island's energy partner, we are also looking at identifying energy solutions that can positively impact their energy usage and their bills going forward."