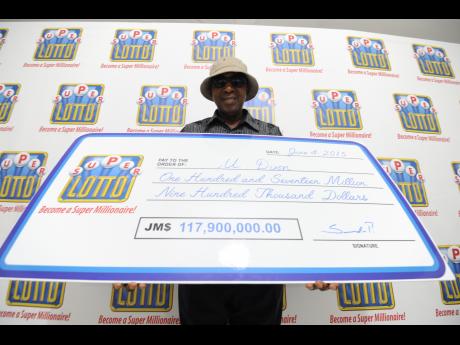 He strode in confidently, clad in a fisherman's hat and dark glasses, to collect his prize.

U. Dixon is the envy of his neighbours in St Elizabeth as yesterday he claimed his prize of J$117.9 million (US$1.02 million) as the 12th Super Lotto jackpot winner overall, and the fourth Jamaican. Dixon received his cheque at a handover event at the Spanish Court Hotel.

Vice-president of group corporate communications at Supreme Ventures Ltd, Sonia Davidson, said Dixon won the May 22 draw valued at J$196.5 million, and claimed the prize on Monday, May 25. He had purchased a $200 split-price ticket with the numbers 7, 12, 13, 24 and 30, and Super Ball 3. Dixon said he always buys those numbers.

"It's something that I just said, 'I'm going to play them every week'," he said. "I didn't just have a dream. I just picked those numbers and said I'm going to play them. And it turned out to be the winner." Dixon, who said he used to be a truck driver in the United States, but is now retired, said he had been playing the numbers for about two years, and was very calm about winning.

"I didn't get carried away; now I know that I won the money," he laughed. "I was hearing that I won it, but today, I've proven that I won. Now I'm going to think about what I'm going to do with it."

He said he didn't listen to the radio or television to hear the particular draw. It was while passing a Lotto shop that he asked his friend to check the numbers.

"The girl said, 'You know you can't collect this money right here'," he recalled. "And I said, 'What you talking about?' She said, 'You won the Lotto'." It was when his friend started dancing that Dixon realised something was big.

"I thought I had won a couple thousand dollars or something," he said. "He said, 'No, you won the jackpot!'. But it didn't touch me then ... . I said when I get the cheque, I will believe it. It feels great; I feel like I'm riding on a tall horse right now."

"It's really very exciting for us to have a new winner," said Sandra Tavarez, the Super Lotto senior finance analyst. "I just want to say congratulations to Mr Dixon. Enjoy the prize, and welcome to our exclusive Super Millionaire Club."

Laurie Wiggan, director of compliance and regulatory at the Betting, Gaming and Lotteries Commission, confirmed that after their validation process, Dixon was indeed the winner.

"My plan for the money?" Dixon said. "To just enjoy it." The jovial retiree said he had even bought another ticket since winning the jackpot.

"But I haven't checked that ticket yet," he smiled. When asked how the game could be better, Dixon quipped that an increase in prize money might help. He even had advice for persons currently playing the Lotto games.

"Just keep playing and just live in hope," he said. "Hope that one day your dream will come true just like mine did. I was retired and just sitting here waiting for this money. I've been waiting for 72 years for this."