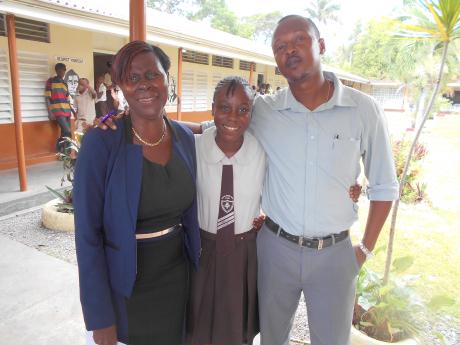 The entire school population at Boundbrook Primary in Port Antonio, Portland, is now eagerly awaiting word from the Ministry of Education as to whether or not their top-performing student, Roshantia Bramwell, will be awarded a regional scholarship.

"I was determined to do well," said Bramwell. "After finishing joint second in the first end-of-year exam, something that was unique to me, having occupied first spot all my school years, I pledged to do my best at GSAT and today, I am a proud student."

She added: "My mother and father encouraged and assisted me greatly, and my teacher Clyde McKenzie believed in me and encouraged me to do my best in all subject areas."

Bramwell, who maintains that there is no jealousy among her classmates, as everyone encourages each other to do well, will attend the school of her choice, Titchfield High, in September 2015.

But for grade-six teacher McKenzie, it is no surprise that his charge secured such high grades as, according to him, she is a dedicated and committed student who is capable of achieving just about anything.

"What she has done now is to raise the bar at this school," commented McKenzie. "It, therefore, means that this standard has to be maintained and, as a specialist teacher, I will be pulling out all the stops to ensure that impressive grades are acquired by students in future exams. We believe in education and today's GSAT results are a testimony that our teaching population, who have worked hard and tirelessly, are now reaping the benefits of their labour," he added.