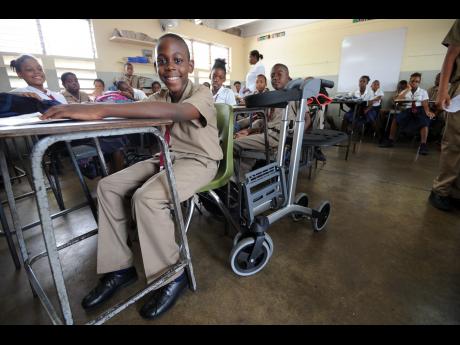 Ricardo Makyn
EJay Riley, who has sickle cell disease and also suffered a stroke, in his classroom at Half-Way Tree Primary School in St Andrew. 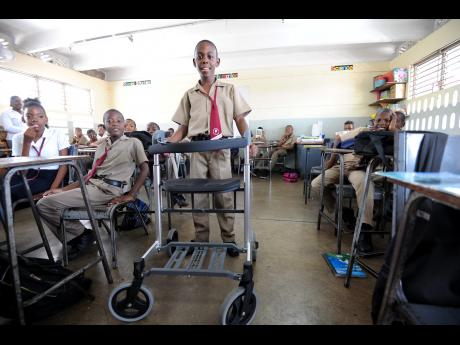 Ricardo Makyn
EJay Riley, who has sickle cell disease and also suffered a stroke, in his classroom at Half-Way Tree Primary School in St Andrew.
1
2

"Mummy, I can't talk," were the muffled words that Patricia Riley heard from her youngest son, EJay Riley, as she held him in her lap.

It was a mother's intuition that caused her to realise that something was not right. When she took EJay to the doctor, her worst fears were confirmed - he had suffered a stroke at age 11.

"He got the stroke December 21, 2013. He was in grade 5 at the time, but after the stroke, he has been in and out of school so he didn't do much of grade five," Riley told The Gleaner.

That EJay was able to recover to the point of being able to sit the Grade Six Achievement Test (GSAT) is a miracle in itself.

The Half-Way Tree Primary School student received a 90 per cent grade in science and earned an overall average of 76 per cent, passing for Kingston Technical High.

EJay's mother said she did not pressure her son to study for GSAT because he was still in a fragile state.

"EJay has sickle cell disease, so that is what caused the stroke, but God has been so good because it was a major stroke and the only place that was moving was his left hand. Everything else was shut down. He was literally blind, his face was twisted. Him couldn't do nutten, just lay down," she said.

Riley indicated that she has been a tower of strength for her son, taking notes for him in class and reading them to him at nights. She also told The Gleaner that EJay suffers from short-term memory loss, but has been recovering steadily, even though he still lacks full mobility in the right side of his body. EJay is able to move around with the assistance of a rollator.

Riley also said she has almost single-handedly saw to EJay's recovery, as she has listened to CDs and read books on how to care for stroke patients, using this information to help her son.

"It has been difficult financially, because at the time that it happened, I left my job to ensure that I was at school with him every day to help him go to the bathroom, which he has to do a lot and as it is right now, the bathrooms are not suited for him. I am here for him all day, every day," she told The Gleaner while fighting back tears.

While she is happy that he was able to sit the GSAT, EJay is concerned that he will face even greater challenges at high school in terms of mobility and ease of access, given that most schools are not equipped to accommodate students with his unique needs.