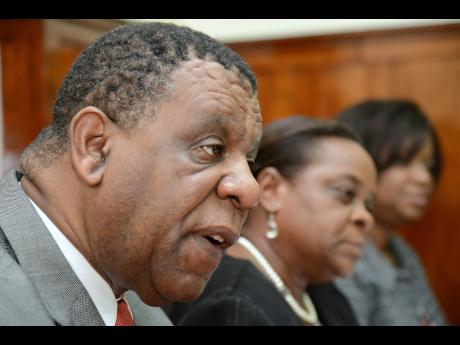 Rudolph Brown
Elan Powell (left), assistant commissioner of police, speaks to members of the media while Superintendent Enid Ross-Stewart (centre), and Dr Sheryl Thompson-Burke, look on, during a press conference held at the Police Commissioner's Office in St Andrew yesterday.

The police are reporting that at least 278 children under the age of 16 have been sexually abused within Kingston and St Andrew since the start of the year. Of this number, 46 girls were impregnated.

"We see this as a major problem," Assistant Commissioner of Police in charge of crime Ealan Powell stated during a press conference held at the Office of the Commissioner of Police in St Andrew yesterday. "The age group is between four and 16 and (the sexual abuse is) mainly committed by fathers, stepfathers, teachers, (and) pastors. The accused come from a very wide cross section of persons. They are of various ages. A lot of them are three, four times the ages of the young girls. People who they were supposed to trust and who were supposed to be protecting them are the ones who are violating them mostly."

The police have secured 34 convictions since the start of this year for men across Kingston and St Andrew who have had sex with persons under 16. Powell said the police have been finding it challenging to get prosecutions as

parents, other family members, and sometimes even the victims themselves are reluctant to cooperate with investigators, with some of the girls even going missing.

"They (girls) report the cases in many instances just so that they can get prenatal care at the hospital," Powell said. "Because if they go to the doctor and the doctor finds out that they are pregnant, the doctor has an obligation to report it to the police, so what the children will do is come and report it before, but after that, there is no interest."

Head of the Centre for the Investigation of Sexual Offences and Child Abuse (CISOCA) Superintendent Enid Ross-Stewart said her team has had to be employing "unorthodox methods to get to know who these adult men are because these young girls don't tell us who they are. They give us wrong names; they give us open lots for addresses; they tell us varying things".

Of the under-16-year-old girls impregnated by their abusers this year, four were reported in January, 15 in May, and four within the first two weeks of June.

"These are the ones who come to us; there are those who don't come and they try to find a way on their own," Dr Sheryl Johnson-Burke, medical officer employed to the Ministry of National Security, shared.

She further disclosed that there are girls who try to get abortions without going to trained medical practitioners.

"This is where you find persons getting very ill, losing parts of their genito-urinary system, and there are those that can die from trying to secure an abortion from somebody who isn't trained to do it," Johnson-Burke said.

Powell warned doctors that abortion is still illegal as he said the police have been "getting more and more reports of doctors being involved in it, and we are going to have to do what we have to do, so it is just a word of caution to the doctors".

Powell said the focus is often placed on the girls being molested, but another worrying trend that the police are seeing is that of boys being molested by men.

Inspector Cecile Williams-Mullings, lead investigator at CISOCA, further revealed that there have also been reports of older women sexually abusing children under 16. She cited two incidents: one of a grandmother performing oral sex on her stepson; and another of a mother allowing her daughter, who was under 10, to perform oral sex on her.