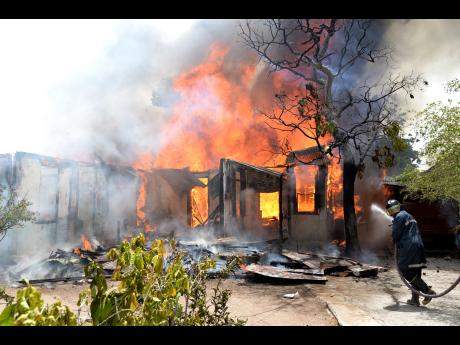 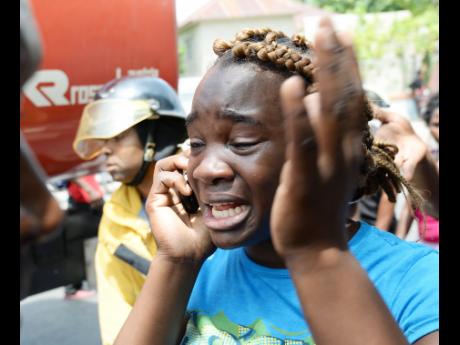 Jermaine Barnaby
Carressa Purcell cries openly while making a call to report that all her belongings were lost in the fire.
1
2

Despite fire crews' best efforts, a seven-bedroom dwelling house on Lyndhurst Road was reduced to rubble yesterday afternoon after a massive fire consumed all of the property. The inferno that began around 1:06 p.m. and threatened to destroy adjoining premises, including shops and business places was brought under control by two units from the York Park Fire Station, and one from the Trench Town and Rollington Town Fire stations, respectively.

The 15 occupants of the board house located at 17 Lyndhurst Road, despite the best efforts of the firemen and the police to contain the area, rushed to save their belongings but all was in vain. A few items, including beds, refrigerators and a television set, were rescued from the blaze while the distraught occupants had no other choice but to watch as the fire and smoke darkened the sky.

A visibly distraught Carressa Purcell, had gone to purchase banana in the Crossroads area of Kingston when she received the telephone call informing her that the residence was on fire. In sheer disbelief, Purcell reduced to tears, watched as all her belongings went up in flames. "I don't save anything ... everything burn up. I caan find anyone. I just hope seh nobody nuh burn up inside deh," she cried.

Around 1:09 p.m., while in his shop a few metres down the road, Kenroy Collington received the devastating news about the inferno that had engulfed his home.

"I was in mi shop when I hear seh fire. I run come up here and I don't save nutten. Mi lose everything! Mi can't even begin fi imagine a wah coulda start the fire. Jah know!" Collington exclaimed.