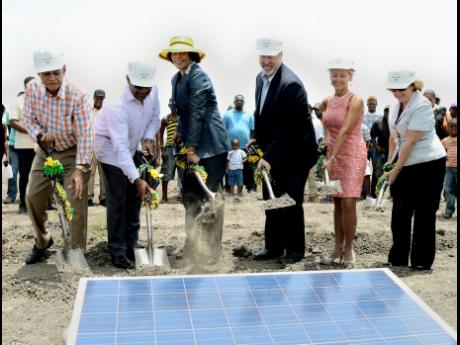 PRIME MINISTER Portia Simpson Miller has dismissed a suggestion from her Opposition counterpart to appoint a czar with responsibility for growth, saying that the Cabinet is charged with doing that - bringing growth and development to the country.

"I don't know what that means because every ministry is supposed to be making their contribution to growth," Simpson Miller told The Gleaner yesterday, days after this newspaper published an article penned by Opposition Leader Andrew Holness, in which he called for a growth minister to be appointed.

Simpson Miller, who was in Content Village, Clarendon, at the groundbreaking ceremony for a 20 megawatt solar-energy plant, said the need for growth in the economy was not lost on her administration.

"We have been pushing very hard to see how we can generate the kind of growth that will see the country continue to move forward. We are moving forward in some areas, but I think if we can achieve a higher rate of growth, it will be much better for our people," the prime minister said.

Questioned whether the time had come for a shake-up in the Cabinet, specifically the replacement of investment minister Anthony Hylton, she said the country should see additional investments coming on stream by year end.

"Growth and investment go hand in hand. Investment is very critical, and to the extent that we can actually attract foreign direct investment, (we will) and we have been attracting some, and I am sure that by the end of this year, some will be getting off the ground, as I was told. I am hoping that will happen so that we can get to a percentage of growth, not that we would be satisfied, but that we will be comfortable with," she said.

He noted that Jamaica has experienced anaemic growth over the past 40 years, and argued that in addition to meeting the IMF benchmarks, the Government should focus on growing the economy.

"I do not dispute the theoretical assumption that a stable macro economy, a better aligned currency, and a conducive regulatory environment is necessary to facilitate growth in any economy. However, we would be mistaken to believe that this is sufficient in the Jamaican context, or that growth will be an automatic consequence of the IMF programme," Holness said.

Half-way into the four-year reform programme, the IMF has said that investment and growth prospects in Jamaica are gradually improving. The fund projects growth at two per cent this fiscal year, even though Finance Minister Dr Peter Phillips is less optimistic. He is forecasting growth at 1.6 per cent.

The Jamaican economy grew by 0.4 per cent in the first quarter of 2015 when compared to the similar quarter of 2014. This growth was due mainly to a 0.6 per cent increase in the services industries.

For the Opposition leader, Jamaica should have "a kind of czar, someone with a clear vision, political clout and global understanding of the economic system, to literally pull the various ministers, ministries, agencies, and private players together in a coordinated and concerted effort."

Yesterday, Simpson Miller told The Gleaner her administration has had to be repairing economic breach committed by the previous administration and that the nature of the economic reform being undertaken now is directly related to "what we inherited".

"For example, if you have a healthy nation, you are going to have people who will be able to perform the various tasks; if you have an educated people, you will have a prosperous nation."

"Every area impacts the other," the prime minister said.

"For me, every ministry is important and everyone is supposed to add their bit of growth so that when you add up what is coming from all, the country's growth level will be much higher," she added.