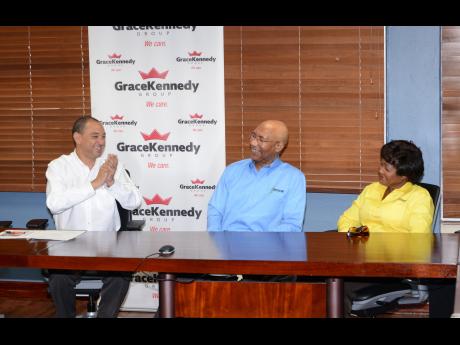 Contributed
Sir Patrick Allen (centre) and Lady Allen (right) are greeted by GraceKennedys chief executive officer, Don Wehby, upon their arrival at the GraceKennedy Group Headquarters, in Kingston on Thursday.

Governor General Sir Patrick Allen on Thursday continued his tour of corporate Jamaica with a visit to GraceKennedy (GK) Group of Companies. Accompanied by Lady Allen, the governor general was met on arrival at GK's corporate headquarters by chief executive officer Don Wehby.

During talks that followed in the boardroom, the governor general said that his corporate visits were designed to affirm and encourage companies that are doing well in Jamaica. "GraceKennedy is a household name in Jamaica," Sir Patrick said. "The values on which you were built are values that will last."

The governor general had high praises for the GK family's trailblazing role in corporate Jamaica, its vision to be a global consumer group, and its firm commitment to corporate social responsibility. He lauded the group's longstanding support for education and sports, and more recently, its recognition of household workers through the GraceKennedy Heather Little-White Household Worker of the Year Award.

He said that GK's commitment and belief in Jamaica and the confidence that its social programmes have helped Jamaicans to attain are in sync with his 'I Believe Initiative'. "We must invest in our young people," he said. "We have to trust our young people that with proper guidance and mentorship, they will do well."

Wehby commended the governor general for demonstrating his appreciation for corporate Jamaica. He said that GK firmly believes that an export-led strategy with manufacturing at the core is essential to Jamaica's economic growth. He said the GK team was excited about development at home and overseas, but the deepest joy came from the way in which the group's social and community projects have changed thousands of lives for the better.

Sir Patrick's visit to GraceKennedy included a tour of the Science Technology Engineering and Mathematics Centre, which prepares young people for careers in science and technology through introduction to new technologies, including robotics.