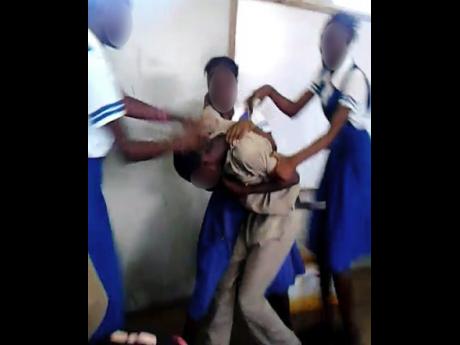 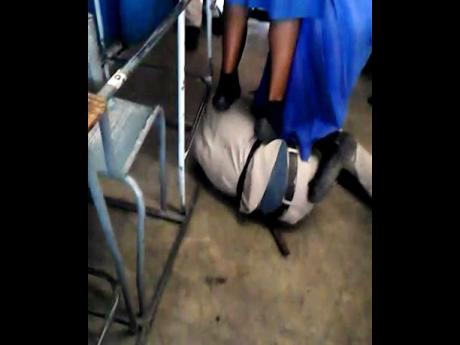 The four teenage girls, whose merciless beating of a 13-year-old boy at the Yallahs High School was recorded, were remanded when they appeared in court last Thursday after the judge viewed a tape of the incident.

The schoolgirls, who are charged with assault occasioning bodily harm, had appeared in court previously and were granted bail.

When they appeared in court last week, the presiding judge reportedly asked them to give their version of the events, and each girl claimed that they were just playing with the boy when the kicked, boxed and stomped on him.

According to Sunday Gleaner sources, having heard the girls claim and the allegation from the attacked boy, the judge ruled that the matter should be settled at mediation.

However, the judge was then told of the 55-second-long video of the incident, which was brought to the public's attention by The Sunday Gleaner on June 28.

The girls and their parents, along with the boy and his parents, were then asked to leave the room as the judge viewed the footage which showed the four girls - three 14-year-olds and a 15-year-old - laughing and having fun time as they savagely attacked the boy.

When the parties were summoned back into the courtroom, the judge reportedly told the girls that the video did not show anyone playing.

According to the sources, the judge ruled that based on the video, the four girls should be remanded until July 23 when they are to return to court.

The sources say the girls, who had been jovial all through the hearing of the matter, resorted to tears when they heard that they would not be going home.

Late last week, the boy's stepmother, Patrice Sinclair, told The Sunday Gleaner that she was aware of the ruling of the judge and remains determined to see the case through.

"He could still be in the hospital suffering from some serious injuries, he could be like a vegetable, or they could have even called us to the school to come and identify his body," said Sinclair.

According to Sinclair, the boy still complains of head and back pains on occasions. She said he has been getting counselling at the Victim Support Unit in Morant Bay, but still maintains that he does not want to go back to the school, as he is fearful he will be teased.