Jamaicans flock unlicensed beaches which do not have the basic safety requirements! 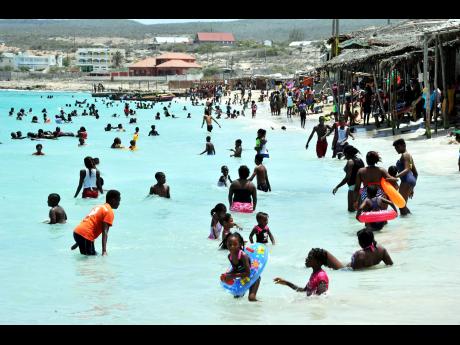 Norman Grindley
Patrons having fun at the Hellshire Fishing Beach which is not a licensed swimming beach. 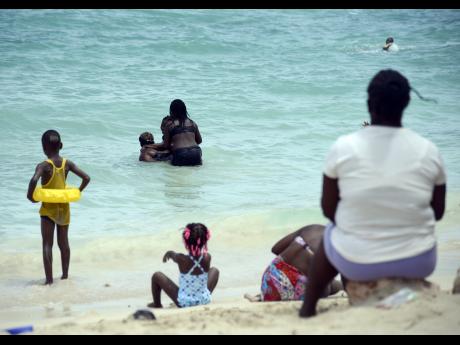 An adult keeping a close eye on children enjoying the Hellshire Fishing Beach, which is not licensed for swimming. 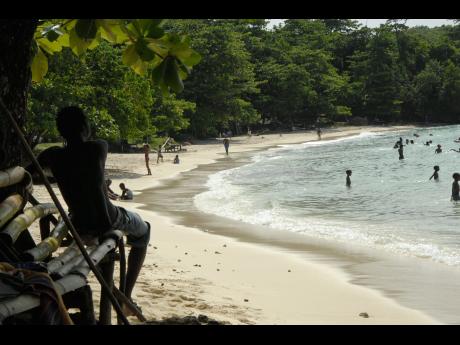 Ian Allen
Frolicking at the popular Winnifred Beach in Portland.
1
2
3

Beachgoers hoping to escape the heat this summer are being cautioned to swim at their own risk as several popular swimming spots across the island have not been licensed, and of those that are licensed, several are operating in contravention of the rules.

The Beach Control Act stipulates that public bathing beaches and commercial beaches must be licensed by the National Resources Conservation Authority, through the National Environment and Planning Agency (NEPA), in order to operate.

However, several popular beaches which attract hundreds of persons daily have not met the requirements to qualify for licences, as they fail to meet even the basic rule of having lifeguards on duty.

Andrea Donaldson, head of the Ecosystems Management Branch at NEPA, said while they are aware that members of the public continue to frequent these unlicensed swimming spots, the agency only monitors those that have been licensed.

According to Donaldson, NEPA is now compiling a list of both licensed and unlicensed beaches to educate the public.

"There are beaches in Jamaica that are not operated as either a public bathing beach or a commercial beach that the public does use, and those beaches do not have lifeguards, and a number of beaches like that do exist in Jamaica," said Donaldson.

"If they are not licensed, it's the people going there basically at their own risk because there are no lifeguards on duty," cautioned Donaldson.

Approximately 173 beach licences have been issued for recreational use in the past five years, but while several of these licensees have breached the terms of their agreement, NEPA noted in emailed correspondence to The Sunday Gleaner that none of the operators have been prosecuted.

"While several of the licensees have breached conditions of the licences, there is no record of any holder of a beach licence losing their licence unless it has not been renewed. The breaches identified are generally complied with upon serving of the first enforcement instrument, which is a warning notice.

"Once this happens, there is no need for further enforcement action, which may include prosecution," said NEPA.

Operating without a beach licence or in contravention of such is a criminal offence, which could result in prosecution and/or a fine of up to $100,000. Although NEPA does not issue provisional licences, individuals who have commercialised public beaches across the island have taken to putting up notices of intent to secure a beach licence.

While licensed operators continue to run afoul of the law without prosecution, the sea has been far less forgiving than the authorities and each year claim the lives of scores of unsuspecting beachgoers at both licensed and unlicensed beaches.

At least three individuals drowned around the recent Easter holiday at the Winnifred Beach in Portland this year. They included a child and a 78-year-old tourist who was visiting the island with friends.

A frequent visitor to the beach told The Sunday Gleaner that he has never seen a lifeguard on duty on any of his visits.

In March of this year, 16-year-old Meadowbrook High School student Decardo Morgan drowned while out with friends at the Sugarman Beach in Hellshire, St Catherine, which is a licensed beach.

There have also been reports of several instances of persons drowning at the Hellshire Fishing Beach in previous years. That popular spot in St Catherine is not a licensed bathing beach, yet it attracts hundreds of persons on any given day.

Under the beach-control regulations, it is the responsibility of the lifeguard on duty to report to NEPA in writing any accidents or injuries which occur on a beach or licensed area within seven days after the accident or injury. However, checks with state entity show that it has not received any reports of drowning in the last two years.

With many beaches operating without lifeguards, national co-ordinator of the Jamaica Life Saving Society (JLSS), Norman Fraser, said that is the fault of the operators of these facilities and not a reflection of a shortage of lifeguards.

"Jamaica has more lifeguards than any other country in this hemisphere. We have in excess of 3,000 lifeguards," said Fraser, whose organisation is the only one recognised by NEPA to train lifeguards.

"Enforcement is the main issue. It's not that we don't have numbers; it's enforcement," declared Fraser, even as he expressed sympathy for NEPA, which he noted has a number of responsibilities to shoulder.

NEPA is tasked with monitoring all public and recreational beaches, including those at hotels, villas and guest houses; prevent and control pollution; manage ecosystems; process applications for permits for planning, subdivisions and hunting; and investigate incidents of non-compliance, among a raft of other duties.

3. A minimum of one licensed lifeguard must be on duty at all times during the opening hours of the licensed area.

4. One first-aid kit (to be located at the lifeguard stand during opening hours).

5 One lifeguard stand (to be located so as to ensure maximum coverage of the licensed area).

6 One spinal board for assisting with rescue (to be located at the lifeguard stand during opening hours).

7 One life ring with a 15-metre nylon rope attached (to be located at the lifeguard stand during opening hours).

8 Whistles for use by the lifeguards (one per lifeguard).

9 Two rescue tubes to be in possession of the lifeguards.

11 The maximum seaward extent of this licensed area as outlined in the Beach Control Act (Safety Measures) Regulations 2006 (30m offshore) is to be delineated using buoyed ropes.