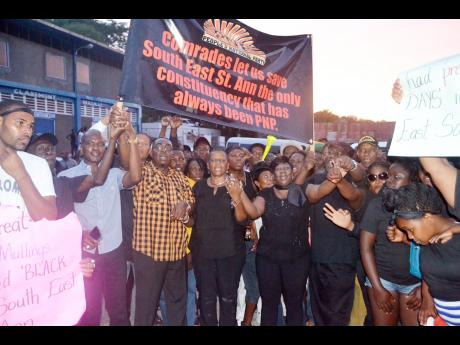 St Ann, as the protest by some councillors against Member

The three councillors - Lydia Richards of Bensonton division, who reiterated her intention to challenge Hanna to be the People National Party's candidate for the next general election; Lloyd Garrick of Moneague division; and Lambert Weir of Claremont - supported by Vinnette Robb-Oddman of Calderwood division in South West St Ann, blasted Hanna for her perceived ineffective-ness in the constituency.

Ian Bell, councillor for the Beecher Town division, was not at the meeting.

Bell only became a councillor for the constituency after the realignment of boundaries prior to the 2011 general election, which moved him from North East St Ann.

The other councillors were in place when Hanna won the seat for the first time in 2007.

Richards, who said she was part of the team that organised the meeting, said it was called

to inform constituents about happenings in the constituency.

A banner used as backdrop read: "Comrades let us save South East St Ann the only constituency that has always been PNP."

NOT IN HANNA'S CORNER

McDonald made it clear where his support lay, saying he would support Richards in her bid to become the PNP candidate in the next general election.

McDonald outlined to the large turnout of persons a sequence of events that led him to believe that there were unscrupulous goings-on at the constituency office.

McDonald said the contractor general is currently investigating these allegations.

After the meeting at Melrose Farm, the constituents donned black shirts, formed a motorcade and headed to Claremont proper, where the conference was being held, but not before the police had visited the meeting and spoke with the organisers.

The protesters were told they would not be allowed to disrupt the meeting, but were given permission to congregate at the bus park, which they did, to chants of "Lisa must go!" and with placards stating "The black days are here."

McDonald later told The Gleaner that he wanted integrity to be restored to the constituency office.

"What they are doing is robbing the poor, and I call it crime against the poor," McDonald alleged. "The truth is, politicians should be about the gentrification of the poor, and that is what I would want to see."

The constituency conference was well supported, with speaker after speaker voicing support for Hanna.

Parliamentarian Dr Omar Davies offered to help resolve the conflict, and Hanna appealed for an end to the impasse, while saying she was not afraid of a challenge.