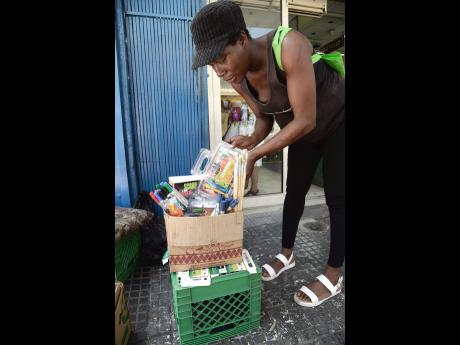 Jermaine Barnaby
A roadside vendor tends to her goods in a box outside Kingston Bookshop in Kingston yesterday. 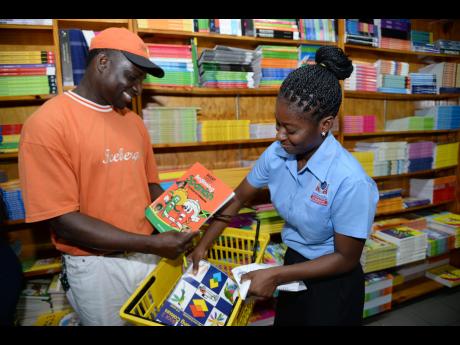 Jermaine Barnaby
Sirbastian Parker (left) is assisted by store clerk, Raven Saunders as he does his back-to-school shopping at Kingston Bookshop in Kingston yesterday.
1
2

The harsh economic climate has forced some parents to risk buying their back-to-school stationery supplies from street peddlers rather than legitimate bookstores.

"I really can't afford to buy what I need in the bookstores. I get the books far cheaper on the streets," one woman was overheard saying as she looked through a book selection from a peddler in downtown Kingston.

She was just one of many parents now faced with the hassle of back-to-school preparations, with just over a month to go for the start of the new school year.

As The Gleaner made its way across the Corporate Area to get a feel for the back-to-school preparations, it was evident that the shrinking dollar and rising cost of living has forced many to make drastic decisions.

Lorraine Harris, a mother of one but with responsibility for four, had no reservations about buying from the 'book peddlers' who she claimed sold the books at a cheaper price.

"If I can save at least a $100, then I will buy from them. I have to look for the best prices," Harris told The Gleaner, as she went through her booklist and made selections from the street bookstand.

Accompanying Harris was her eight-year-old nephew, Jamar Robinson, who stated that he would not be affected if he did not get his supplies from a store.

"If she doesn't have the money, I will just take it, 'cause she not rich," he said.

Not all parents shared the same sentiment, however, as inside the Kingston Bookshop on King Street, downtown Kingston, some parents said they preferred to get their supplies from a reputable dealer.

"I want a receipt to show that I purchased the book," stated Annmarie James, mother of three, who prefers the option of being able to return the goods, if necessary.

"It better to be safe than sorry," said Sirbastian Parker, who said he believed while the price is important, so is the quality, assurance and durability of the product.

Yesterday, Education Minister Ronald Thwaites announced in Parliament that the ministry would continue to monitor the use of other texts to augment its provisions "in light of the exorbitant amount that parents are expected to invest in textbooks, some of which are often not used."

The following is based on Schools' Bulletin 26/2015 titled 'Guidelines for the Development of Schools Booklists' and indicates the number of books to be purchased at grade levels 1-9.

- Grade Levels Number of Books to be Purchased

- 1-3 No more than two supplementary texts

- 4-6 One workbook each for Science, Social Studies, Language Arts and Mathematics

- 7-9 No more than two supplementary texts, and on average, three literature books, approximately one per term

Books that are required to purchase outside of these guidelines MUST be based on children's unique learning needs.

In addition, parents may also be required to purchase dictionaries, atlases, technical equipment and other materials that are specific to specialised areas such as home economics, visual arts, industrial arts and engineering.

Following a survey of the cost of the various textbooks recommended by the ministry, the average costs for books based on the guidelines are outlined below. It must be noted that these costs cover textbooks only and not the support materials for school.

Parents are encouraged to contact the Ministry of Education at 922-1400-9 or www.moe.gov.jm or the ministry's regional offices.