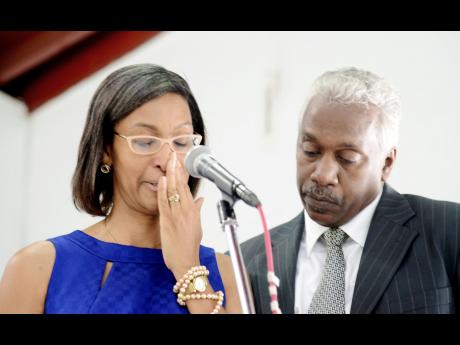 His passion for nation building, in addition to his outstanding writing and communication skills, did not escape the minds of individuals who gave tributes at the thanksgiving service for the late Kenneth 'Ken' Jones, yesterday, at the Stella Maris Roman Catholic Church in St Andrew.

Dr Oliver Jones, who represented the Farquharson Institute of Public Affairs, of which Ken Jones was general secretary, indicated that the nation has missed a nation builder.

"Ken Jones envisioned a big Jamaica, a proud Jamaica, a small nation building a sound economy through the application of a wide range of skills and strategies. He often asked 'If Singapore could do it, why couldn't we?'," Oliver Jones told the gathering.

"I remembered his distinctive voice, when we planned public seminars relating to agriculture, highway 2000, executive agencies, leadership and government. He also invited public prosecutors from the United Kingdom to Jamaica, to share ideas on strategies on how we can move forward. Thanks, Ken, for the great work you did for this country and this great institute," he said.

In the meantime, his daughter, Suzanne Singh, in an emotional address, pointed out that her father was one who was committed to his family and stood for integrity.

"The times we spent with him were memorable. Time is really a gift and when it is given, it ought to be spent wisely, and so for the time he spent with us, we give recognition to the one who created time, our mighty God," she declared.

"As you can imagine, daddy spent most of his waking time sitting at his desk and on his computer, which are now special places. Recently, I sat there and reflected, not so much on all his accomplishments or awards that he received during his time, but more so on how he was as a person. Most of you know him as a deep man of thought, articulate, eloquent, astute and witty, but the person at home was very private in his thoughts and emotions," she declared.

Singh added, "Daddy was sentimental about life and he seemed to enjoy packaging memories through music, Internet and certainly on the computer. Even in the face of his health challenges, he remained content, knowing that he will join Mom in a better place."