NWC to Tap Into Wells To Offset Limited Water Supply 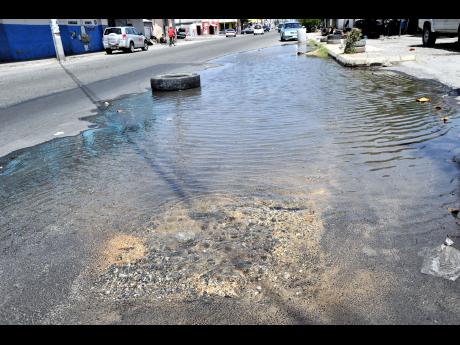 Norman Grindley
A defective water valve on the main pipe on Spanish Town Road near Waltham Park Road, sending hundreds of gallons of water to waste yesterday, even as the National Water Commission institute stringent water restrictions due to shortage of the commodity.

The National Water Commission (NWC) has indicated that it will be seeking additional water supply from wells situated in St Catherine and Kingston.

Charles Buchanan, corporate public relations manager at the NWC, told The Gleaner yesterday that the company has been pursuing various initiatives to augment the limited water supply that is currently available.

He said that the NWC is currently seeking to introduce more well sources and reactivate wells that were previously out of commission.

The NWC has also put out expressions of interest for private wells which will also be used to supplement current supply.

"In addition, we have requested expressions of interest and are awaiting dates from private entities with respect to re-engaging a total of about nine possible wells in the Corporate Area," Buchanan disclosed.

"It will take a little more time for those bids to come in and for those systems to be put in place, but that is something that is already taking place," he said.

The communications head also explained that changes were being made to the NWC systems to make them more efficient in delivering water to the public.

"We are also looking at ways in which we can better integrate various parts of the system so that the limited supplies can be shared as evenly as is possible during this period, because we are aware that one of the difficulties is that some areas are able to be served easier and better than others, especially during these times. And that's part of the nature of water supply systems where the distribution of water is challenged by issues of elevation, infrastructure, pipeline, location and the distribution network whether you are far from or near to the source," he said.

Speaking in regards to the enforcement of the water restrictions, Buchanan has noted that the public has, for the most part, been cooperative in adhering to the prohibition.

"We have seen good responses, there are instances where persons have not responded appropriately, but we have been seeking the support of the other agencies to assist us in policing the prohibition notice which we have issued," he said.