Gone with the wind - Farming couple laments destruction of greenhouses 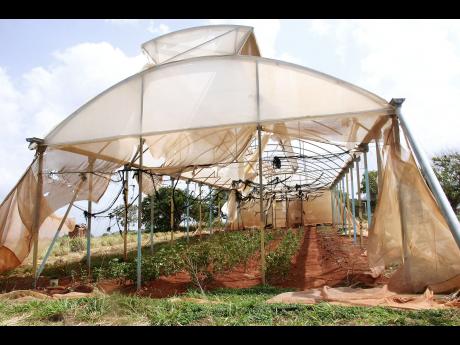 Christopher Serju
The covering of this greenhouse which two years ago was the populated by cabbage and bell peppers is now torn to pieces, putting the facility out of use. 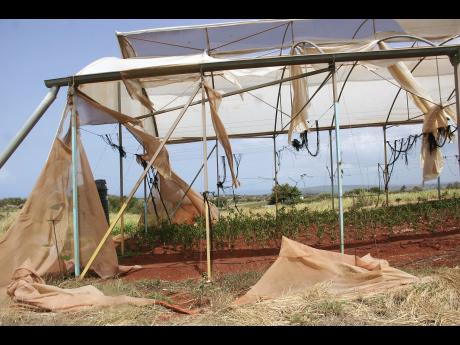 Christopher Serju
Pieces of the plastic covering stand in mute testimony to the effective destruction of the wind. 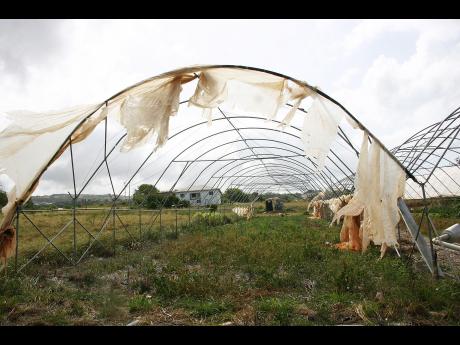 Christopher Serju
Another of the greenhouses which is now literally a skeleton. 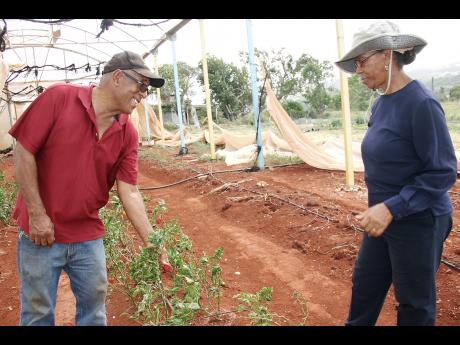 Christopher Serju
Winston Ebanks finds something to smile about, but his wife, Vivienne, is not amused as they reflect on the time and money spent in setting up their greenhouses which were a source of pride, as well as income. Now the greenhouses have been destroyed by the unusually strong winds which have been affecting sections of St Elizabeth. 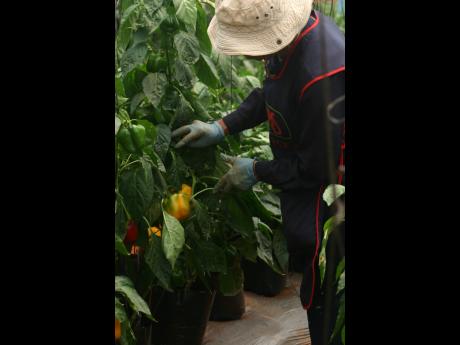 Christopher Serju
Vivienne Ebanks and her produce, before the winds wiped them out.
1
2
3
4
5

The ravages of unusually strong winds have ripped to shreds the covering of the once-productive greenhouses operated by Vivienne and Winston Ebanks, a farming couple in Flagaman, St Elizabeth.

The sustained winds have effectively destroyed the facilities which produced cabbage, Romaine lettuce, bell (sweet) and hot peppers, among other vegetables that stole much of the spotlight at the annual Denbigh Agriculture, Industrial and Food Show, two years ago.

"I don't know if we will be going (to Denbigh)," Vivienne Ebanks told The Gleaner on Monday, four days before the start of this year's show which runs from July 31 to August 2.

The Ebankses' dream of duplicating their Denbigh success, as well as their retirement investment, has been torn to pieces, literally, by the strong winds, unlike anything they have encountered before.

"I am 60-odd years old and have been coming here all my life and have never seen this type of weather. We don't have the rain during the summer, July, August, September are usually dry months, but the breeze, I've never seen winds like this yet. This has been going on now for the past three to four months and we've been having constant winds like 18, 20 hours straight," Winston told The Gleaner during a recent visit.

In addition to ripping to shreds the plastic covering of the greenhouses, the strong winds have also torn down the guttering which was central to rainwater harvesting, resulting in a poor outlook for Flagaman and neighbouring communities where farming is the economic lifeline.

"Last year was bad but not as bad as this year. This year is going to be worse. Nothing is happening, I tell you, nothing; everybody complaining. It is affecting everybody," he disclosed.

The Ebankses explained that efforts to rehabilitate the greenhouses were being hampered by the continuous winds, which make it unsafe for workmen to climb or stay atop the frames for any extended period.

Meanwhile, Lawrence Brown, senior meteorologist with the Jamaica Meteorological Service, agrees with the Ebankses that the winds are unusual and a reflection of just one of the harsh manifestations of climate change.

Brown continued: "Now the phenomenon is almost over all of the Caribbean and the maximum winds are more south of the island, so there are times when it is over us or nearer to us - that is the strongest winds - and times when it is further south."

The senior forecaster pointed out that at the Meteorological Service's station at the Norman Manley International Airport, Kingston, sustained winds of 25 knots, gusting up to 36 knots, have been recorded.

Brown has linked the dryness in eastern and central parishes to the phenomenon.

"It is clear that this system has contributed to the dry weather conditions we've been having in the eastern section of the island mostly. You might recognise that we've been having some rain down in the western end, but eastern and central parishes, especially on the south side, have not been getting much rainfall because of this kind of wind regime."

The winds have also affected the Ebankses' open field operations, drying out the soil at a much higher rate, forcing them to spend even more for water, but they remain undaunted even in the face of these challenges.

"When I retired I said to myself, I will never let anything stress me again, so any way it goes, I am going to expand this," Vivienne said, pointing to the ruins of one of the greenhouses.

"We are going to bring it back, but it takes cash to care ... this is a new breeze sah," Winston added.