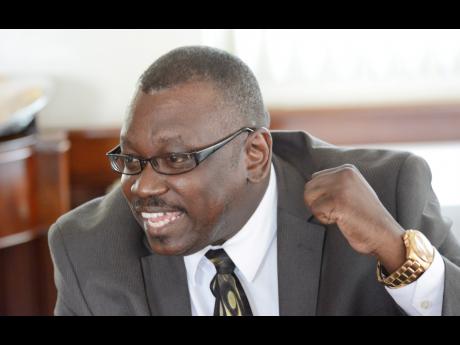 The slow pace at which the Kingston Public Hospital (KPH) has been providing medical certificates to the Independent Commission of Investigations (INDECOM) is retarding the speed at which several investigations are taking place, and the oversight body is now considering hiring a doctor to assist the process.

"There are several cases where the medical report has been outstanding for a protracted period," Nigel Morgan, director of complaints, said during a Gleaner Editors' Forum at the company's central Kingston offices last Friday.

Identifying KPH as a major part of the problem, Morgan said, "Cases have been there for over a year, two years, and medical certificates have not been produced despite constant checks and rechecks."

Medical certificates are important in establishing the nature of the injury that has been sustained by an individual. Thus, in cases where a person has been shot and injured by the security forces, and have been treated at public-health facilities, the institution is required to provide a medical certificate to INDECOM to assist in its investigations.

Morgan said his interaction with KPH has led him to conclude that there is a problem with the internal records system.

"We have suggested a method to them which has not been implemented," he said.

The KPH has promised to respond to the issue.

Questions have been sent to Dr Natalie Whylie, senior medical officer, but no response was forthcoming up to last evening.

In the meantime, Hamish Campbell, deputy commissioner, said, "If it is a case that is likely to reach court because of lack of witnesses, the medical report in itself is very necessary for us.

"We are thinking of INDECOM securing the service of an independent doctor to allow that person to examine patients to provide the evidence of injury," he added.

INDECOM is a commission of Parliament established by statute to investigate the actions of members of the security forces and other specified officials that result in death or injury to persons or the abuse of the rights of persons.

This year, the entity has been given a budget of $342 million to undertake its task, a portion of which goes toward paying an independent ballistics expert who visits once per month to do testing.

"If ballistics analysis is required and the government laboratory may be slow, we have our own ballistics expert who comes once a month and we ask him to do the report on it. We try to use these efforts, including advising the laboratory that this is a case that needs quick results because this is a case with the potential for trial," Williams said.

The commissioner said further that while the medical certificates are important to cases, INDECOM has tried to manage the process in a way that seeks to ensure that lawmen suspected of doing unlawful acts do not escape judgment.

"We put on the front burner any case that has suspicion or possibility of suspicion because we recognise that this is a case that might end up before the courts. We will put all efforts to have those cases finished," Williams said.

At the same time, Morgan said where there is a case in which an officer is suspected to have committed an offence, "we take action in terms of writing to the Bureau of Special Investigations and asking them to put this officer on the watch list. If he is going to leave the island, we would be notified."

He added: "There is not much more we can do except that as early as possible we get responses from them in form based on the allegation that has been made against them, but against the background of waiting now on the medical report, our hands are tied."