’Enough is enough’ - Labourites call on MPs to unite 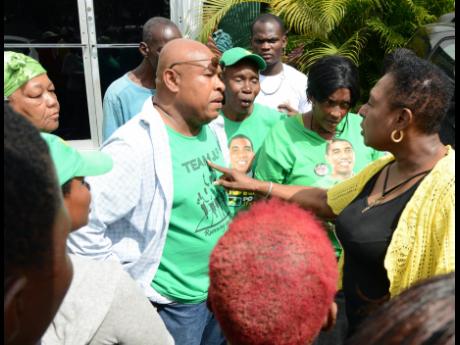 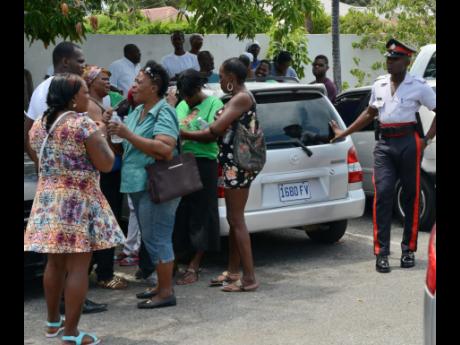 Ian Allen
A policeman keeps a close watch as supporters of the Jamaica Labour Party gather at party's Belmont Road headquarters last Friday during a meeting of the parliamentary group.
1
2

Diehard supporters of the Jamaica Labour Party (JLP) are complaining of being fatigued and worn out by infighting and the seemingly never-ending squabble at the leadership level of the party.

But it appears that it is not only the rank and file Labourites who are depressed and tired of the unsettled nature of the party since the departure of Bruce Golding in 2010.

Hours after veteran politician Karl Samuda was barred from entering his vehicle following last Friday's parliamentary caucus at the party's Belmont Road headquarters, one prominent JLP member lamented that it will be hard for him to win his seat as there seems no end in sight to the dispute, given the stormy nature of meeting.

For some frustrated Labourites, the battling parliamentarians, with their huge egos, are holding the JLP and the nation hostage.

Following last Friday's caucus, the gamut of emotions from grass-roots Labourites who had travelled to Belmont Road gushed to the fore in the form of anger and frustration when news emerged that no resolution had been reached.

Opposition House Leader Derrick Smith's announcement of another meeting on Tuesday was greeted with the outburst: "This is a major distraction, instead of this we should be fighting the PNP."

Winston Ennis, minority leader in the Kingston and St Andrew Corporation, who expressed his frustration at the failure of the leaders to find common ground, was immediately supported by another party worker who declared: "This is waste of time, it's foolishness."

When approached by The Sunday Gleaner, the obviously infuriated male JLP supporter declined to elaborate as a female counterpart declared: "Dem a stress we out, when we fight fe win seat."

President of Generation 2000 Matthew Samuda told The Sunday Gleaner that he understands that frustration of the party workers.

"When you are emotionally invested in anything, politics or otherwise, and there is the feeling of either self-interest or ego derailing that investment, it's a wearying feeling," said Samuda.

JLP councillor for the Lawrence Tavern division, John Myers, echoed similar sentiments. "It is time that we unite and fight the common enemy," he declared.

Howard, who was among a busload of supporters from Andrew Holness' West Central St Andrew constituency, was not amused with the delay in arriving at a resolution.

"The infighting in the JLP is making the PNP look good," lamented a Holness supporter who gave his name as Howard.

The impatience of other Holness supporters was on full display.

At one stage, they demanded to enter the meeting and had to be calmed by veteran MP and Holness backer Olivia 'Babsy' Grange.

"It is time that we have our say," declared one supporter. Another chipped in: "We are hard-working political workers and we are going to switch, if them kick out Andrew them kick we all out as well."

That was quickly echoed by another supporter who declared: "Twenty-one people holding the JLP and Jamaica hostage, it's time to stop the blame game and look for alternatives because we are not supporting anyone but the JLP with Andrew Holness as leader."

Errol Stephenson knows his way in and out of the JLP, having been booted from the party during the infamous 'Gang of Five' episode 25 years ago while he was a vice-president of the party's youth group, Young Jamaica.

"Fast-forward 25 years and the situation remains the same, if not worse," said Stephenson, who left the JLP with Bruce Golding to form the National Democratic Movement before returning to the party.

According to Stephenson, the party should coalesce around Holness.

"To understand where I am coming from, the party was backward and centred on individualism. We have not learned anything as we continue to allow ourselves to be dominated and influenced by others, with everyone having their own agenda instead of being united around a cause."