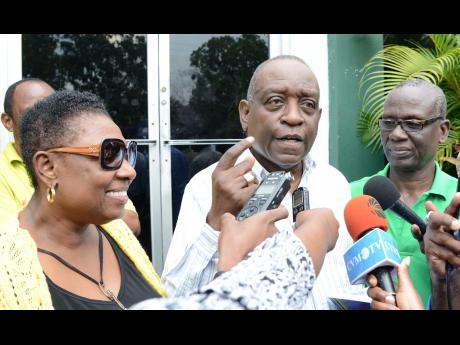 Ian Allen
Leader of Opposition Business in the House of Representatives Derrick Smith (centre), flanked by Olivia 'Babsy' Grange (left) and Desmond McKenzie as he downplayed the storm in Friday's meeting of the party's parliamentary group. 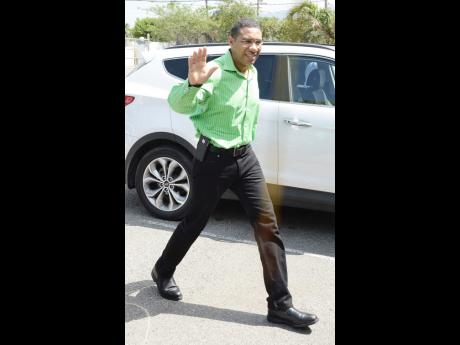 Members of the Jamaica Labour Party's (JLP) parliamentary group last Friday sought to downplay the thunderstorm which reportedly unfolded inside the meeting at the party's Belmont Road headquarters, during a six-hour-long caucus of 20 of the party's 21 members of parliament.

But those in the know told The Sunday Gleaner that the JLP is only enjoying the eye of the storm over this weekend into Tuesday morning when the parliamentarians are to meet in another caucus.

"There were tears from one MP who said this is the worst he has seen the party in his long association. There were barbs and harsh words, and at one point it appeared a physical confrontation was imminent as the party leader rose from his seat in reaction to a comment thrown at him," said one insider.

"However, with Derrick Smith adamant that he would not chair any meeting where there was a vote over the leadership of Andrew Holness, Tuesday will be a watershed because first, Smith will be asked to recuse himself from the chair and let the MPs vote," added the insider, even as the party downplayed claims that the future of Andrew Holness is on the line.

"Not that I know of. I did not get that impression," Smith, the leader of opposition business in the House of Representatives, told journalists following the meeting last Friday in response to questions on whether there was a move to oust Holness.

But the insiders claim that the problems facing the party, including its inability to attract funding for an election campaign or to pay its bills, have all been linked to the question of whether Holness goes or stays.

"With Holness not reading the leaves and walking away before he hurts the party any further, at least 10 MPs are prepared to vote for a new (Opposition) leader, and they made it clear that it is nothing personal against him.

"Even most of those who say he should stay are arguing that it is bad timing to replace the leader, and not that he is good for the party," said the insider.

Reacting to the developments last week and with eyes set on Tuesday's caucus, the seventh to be staged by the JLP's parliamentary group in recent time, some political analysts told The Sunday Gleaner that a move to replace Holness as the Opposition leader would not only be unprecedented, but would mark a significant shift in Jamaica's political culture.

University of the West Indies lecturer in the Department of Government, Christopher Charles, said even if the move to replace Holness is not successful it would still be a major development.

"This would be a major development in our political culture, where the delegates can choose a leader, but the majority of MPs for that party can remove the person elected," said Charles.

"Normally, who the delegates elect, the majority of MPs in that party select as best able to command the respect of the majority. So I see this as a major and mature political move," added Charles, as he argued that Jamaica's politics would benefit from such an action.

"I am making the distinction that they (the MPs) are not doing it because they are wise. It's for political ambition. But the effect is a larger social and political development," argued Charles.

Under the Westminster system of government which is observed in Jamaica, the Opposition leader and prime minister are appointed by the governor general based on who commands the support of the majority of MPs in their respective parties.

For political commentator Shallman Scott, a move by the MPs to remove Holness is the cheaper way out.

"It is the easiest and cheapest way to remove Holness because the party does not have the funds to mobilise for a special delegates conference," said Scott.

He noted that the discontent raging in the JLP comes a fortnight after the release of the latest RJR-commissioned Don Anderson polls which saw the ruling party gain eight percentage points to be in a statistical dead heat with the JLP.

"It is clear that the party wants to position itself for general election. But I would advise them to do this, if they must, after the election, because if you remove him as Opposition leader you will undermine his authority to continue as party leader and weaken him significantly," said Scott.

Political historian, analyst and commentator Troy Caine also agreed that a move by the opposition MPs to remove Holness would be unprecedented.