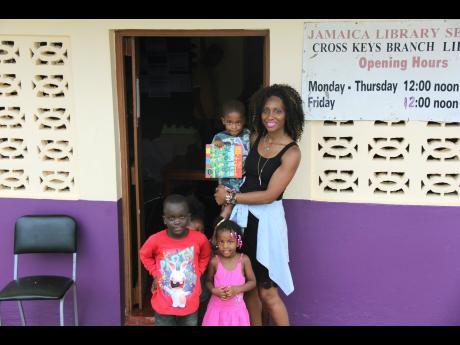 Contributed
Shelly-Ann Richmond with some of the children who benefited from the back-to-school items she distributed. 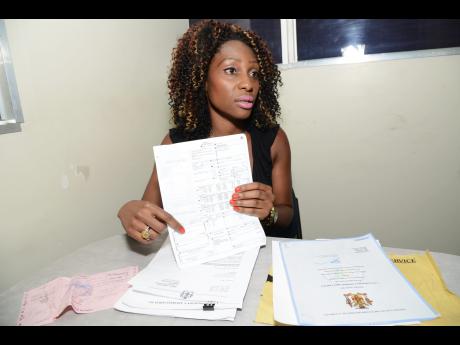 Rudolph Brown
Shelly-Ann Richmond displaying the receipt that she received from Jamaica Customs after paying $79,000 in duties on items she imported to give to needy children in Manchester. 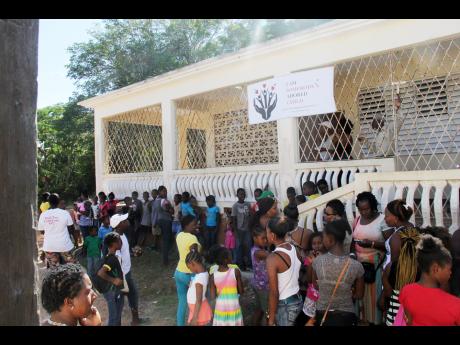 Contributed
Some of the children who benefited from the back-to-school items distributed by Shelly-Ann Richmond in Manchester recently.
1
2
3

The image of a primary school child using the bottom half of a bleach bottle as a drinking cup at Woodlands Primary School nearly three decades ago sent a young Shelly-Ann Richmond home that evening to ask her parents why.

Although Neville and Thelma Richmond tried to explain to the seven-year-old, she still found it difficult to understand why she had a designated drink container and the other child didn't.

It would take years, but she finally understood, after her family migrated to the United States (US). But the image of the child drinking from a "cut bleach bottle" sat front and centre in her mind.

PROMISE TO GIVE BACK

It was in America where she learnt how lucky she was growing up, with relatives in the US who would send parcels and barrels. And she made a promise to help children from her old primary school, and the community of Cross Keys, Manchester, but especially Woodlands school.

"I have told the story time and time again of how fortunate I was growing up. We didn't want for anything. Daddy and Mommy made sure we had all that we needed for school, and more than enough so we could share," Shelly-Ann told The Sunday Gleaner.

For more than a decade, she started giving back to the community and surrounding areas.

"I am so sad and angry today. I can't even tell you how I feel. Every year I have come here and shared the things I have secured for the children, mostly of the community where I grew up. But now I am going back to the US and Jamaica Customs can dump the goods. I am not going back for them," said a tearful Shelly-Ann last week.

She was responding to the customs duty of nearly $40,000 she has been asked to pay on the latest shipment of supplies she is taking into the island to give freely to those in need.

According to Shelly-Ann, in previous years, the Ministry of Education, through its regional office in Mandeville, provided correspondence for her to take to Jamaica Customs, which has allowed her to clear the goods for a minimal fee.

Ninety per cent of the goods are school supplies, notebooks, pencils, rubbers, sharpeners; school shoes and bags. She was also fortunate to get adult clothing, and medicines for the clinic which she had also planned to donate to the residents of the community she once called home.

This time around, she paid $79,000 in duties to clear schoolbooks and supplies which were distributed in the community, and has been asked to pay a further $40,000 to clear a package she says contains medical supplies and some clothes.

"They can dump the medicines in the sea. It was medicines that I collected to give to the Cross Keys Health Centre. But the worst thing about the whole episode is that I was made out to feel like a liar. They didn't say it, but everything in their attitude suggested that they believe I am going to sell the stuff. Like the things are too good to give away.

"I sat before that Customs officer in so much pain. I am so disappointed. For they do not know how many needy children and poor families they have denied getting basic things. They do not know how much I begged from friends and family to put these things together," she bemoaned.

Shelly-Ann and her sister Deon are scheduled to return to the US on August 31, but as far as she is concerned, the Jamaica Customs can "toss the goods and medicines in the sea".

According to Shelly-Ann, the founder of the US-based charity, 'I am somebody's adored child', she is heading home angry and disappointed that those in need will not get the items that could brighten their day.