Skip to main content
HANG THEM! - Manchester custos reiterates call for murders to get the death penalty

Manchester custos reiterates call for murderers to get the death penalty 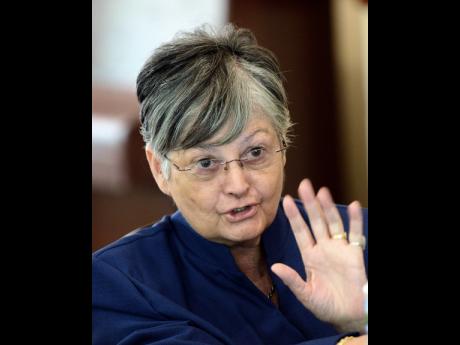 For more than a decade, Sally Porteous has been a strong advocate of the death penalty, and despite criticisms from some opposed to this form of punishment, the custos of Manchester is not backing down.

"I want to know how many more are to be killed before somebody says, 'Stop. It's enough'? I'm saying stop, it's enough! Get the gallows ready and hang them," Porteous told The Sunday Gleaner last Wednesday.

"They have to be taken out and I don't want to hear anybody come to me and say, 'Oh, you know it doesn't prevent murder.' Well, if that's your argument, then we should let everybody out for robbery, rape and everything else. If you're going to kill somebody, you must pay for it with your life. They are destroying the whole country," charged Porteous.

According to the one-time Jamaica Labour Party activist, her call for a resumption of hanging should not be interpreted as a political position as it is a personal position endorsed by many well-thinking Jamaicans.

"I don't want to debate everybody in the whole world. That's my belief and that is also what people have come to me and said. When justices of the peace (JPs) and community people come to me and say, 'Custos, you need to talk more about what we want', then I must do that on their behalf."

Custos Porteous, who broke down in tears during the service of thanksgiving for murdered businessman and JP Terence Green at the Kendal Conference Centre last Sunday, was calm and resolute as she spoke with The Sunday Gleaner about the impact of the growing crime wave and the need for action.

"It's not a complicated issue with me. I think that the country is way beyond terrified. I think that if Jamaica continues like this you will never see any more new investment.

"We've been far too high in the murder rate for far too long, and if you go abroad and sit among a group of people and ask them, 'Would you come to Jamaica to live or to invest?' They would tell you no, and the reason is because they are afraid of being killed," said Porteous.

She continued: "Now, when you have that from abroad and when you speak to the average Jamaican, they know that it's a question of time before some horrible crime will happen to them. There is small cadre of pathological, cold-hearted murderers killing our police and killing our good citizens and they cannot remain. They have to be taken out."

According to Porteous, the night before the gun-slaying of Green, two other JPs in the parish narrowly escaped being murdered.

"One was held up by a gunman in Montego Bay and heard the click of his weapon. It just didn't go off. The same night in Manchester, in Knockpatrick, another had a gun put to her head," said Porteous, who has long argued that the death penalty is the only answer for murderers.

The death penalty remains on Jamaica's law books and can be applied to persons convicted of the murder of a member of the security forces; judicial officers; witnesses; and murder for hire; murder in the course or furtherance of another offence such as robbery, rape or arson; or murder committed to further an act aimed at undermining the public peace. Double-murderers or repeat murderers are also punishable by death.

However, the last murderer to be executed in Jamaica was in 1988.