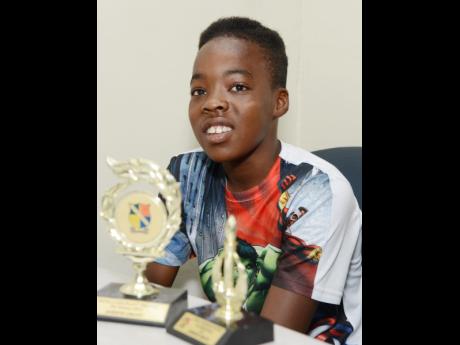 Jahiem Grant lost both of his parents to violence within a 10-hour period. That was back in 2009 when, as a six-year-old child, he had to come to grips with the realities of death and loss.

And come to grips he has.

Jahiem's maturity in dealing with the loss of both of parents is not typical for a 12-year-old and is one of the factors that contributed to his gaining a 94.7 per cent average in the Grade Six Achievement Test (GSAT).

"While I was in primary school and doing my schoolwork, I didn't really think about it because that is the past and the past can't come back again. I know that other persons care for me," he told The Gleaner.

Jahiem's aunt, Kareen Grant, who now takes care of him, pointed out that the situation has made the family stronger.

"It has been challenging, because I have him and my daughter lost her father, too, but with God in the midst of all of it, we smile at any storm. ... I don't have any regrets; it's something that makes me smile, especially if people look down on you and say you don't have any father or mother and they see you really reaching for the goal, you hold your head up high," she said.

The Sabbath keepers did not hesitate to point out that the church community has been instrumental in their healing process.

"Church helps him to heal because the cut is deep and it helps you to close that wound and deal with certain things and move on, and it motivates him and helps him to be a better person," Jahiem's aunt explained.

Jahiem himself readily confessed that his time spent at Sabbath services has been vital to his success. He also went on to explain his study method, which he picked up from a Sabbath lesson at church.

"There are distractions at my house, so I study at school and then after, like two or three days in the week, I have an alarm on my phone that I use and get up early and study in the quiet, and I use that time to work on my weak areas like science," he said.

With those consistent study habits, Jahiem was able to score 100 per cent in science and mathematics and secure a place at Jamaica College, a school he is excited about attending come September.

While she is not sure how to explain the maturity with which Jahiem faces the world, his aunt suspects that it may have something to do with the type of relationship he had with his father when he was still alive.

"I don't know if it is because of the relationship he and his father had why he is so mature, because he was not around other children. He was always with his father and he would always ask questions that puzzle us, so I guess his father was preparing then, not knowing that he was preparing him for the world out there," she explained.