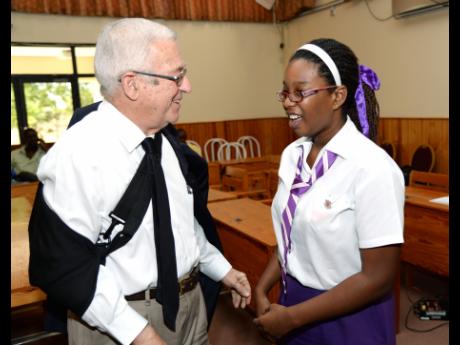 Jermaine Barnaby
Minister of Education Ronald Thwaites chats with Campion College’s, Gabrielle James about her orientation at the school, shortly after a Ministry of Education back-to-school press conference at the Office of the Prime Minister, in St Andrew, yesterday. 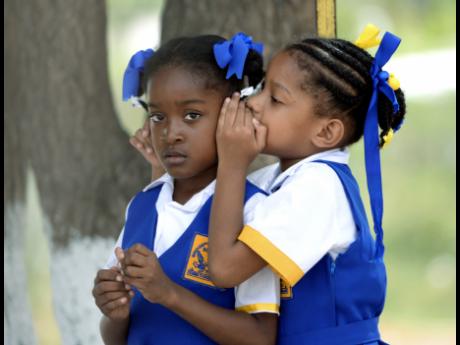 Jermaine Barnaby
Julian Tracey listens attentively as her friend Jada-Moy George whispers something of obvious interest to her, at the Bridgeport Primary School in Portmore, St Catherine, yesterday.
1
2

There is a strong indication of the improvement of the education level of the country's children, as yesterday it was announced that Jamaica exceeded its target of 85 per cent of students mastering the Grade Four Literacy Test.

Also of significance, for the first time in years, the boys have greatly reduced the performance gap in relations to the girls.

"I am pleased to announce that the country Jamaica has reached and exceeded the target of 85 per cent of students in the grade-four age group who have mastered literacy by 2015. This translates into mastery of 100 per cent of the group, when we take into account students who are affected by learning disabilities," Minister of Education Ronald Thwaites revealed at a press conference at the Office of the Prime Minister.

The results show that 86.5 per cent of the 38,700 students who sat the Grade Four Literacy Test for the first time received a level of mastery; 10.7 per cent achieved almost mastery; and 2.7 per cent received a grade level of non-mastery.

More than 92 per cent of the total number of girls achieved mastery while 80.3 per cent of boys did in the literacy test.

NUMERACY MASTERY TARGETS PUSHED BACK TO 2018

Thwaites said it was quite noteworthy to see that the boys had narrowed the usual two-digit gap between their performance and that of the girls. The performance of the boys this year was a major improvement over the 68.6 per cent achieved last year.

The overall improved performance represented a 9.1 percentage-point jump between 2014 and 2015.

In the Grade Four Numeracy Test, however, the improvements were not as considerable. This has forced the ministry to revise the date to achieve 85 per cent mastery in numeracy to 2018.

The numeracy results showed 65.7 per cent of the 39,534 students who sat the exam achieved mastery; 17.9 per cent achieved almost mastery; while 16.4 per cent received a level of non-mastery.

It was, however, an improvement of 8.1 percentage points over last year's results of 57.6 per cent.

Thwaites said a number of factors accounted for the significant improvement in the performance of the students.

"Firstly, I must congratulate the students who took their studies seriously and applied themselves. I also salute the army of principals and teachers who went beyond the call of duty. However, the most critical factor that accounts for the significant improvement is the buy-in of the various strategies introduced," he said.

Among the strategies implemented were literacy and numeracy mock examinations; deployment of literacy and numeracy coaches and specialists; training of principals and teachers in the analysis of data, identification of areas of weakness and the development of remediation programmes for students, among other initiatives.

"The real import of the Grade Four Literacy and Numeracy Tests result is that the near 40,000 students in the age cohort across the public and private schools are now equipped to advance up the education ladder," the minister noted.

In the meantime, Thwaites emphasised that as the new school year begins, no child should be kept at home without good cause, and no school should exclude any student registered there, except for cause as provided for in the Education Code.

While instructing principals to exercise flexibility and discretion to ensure every child attends school, he also urged parents to be responsible in contributing to their children's education.