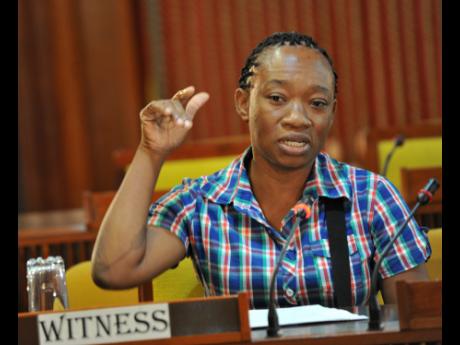 A resident of Tivoli Gardens yesterday recounted how a "bomb" rocked her home on the first day of the May 2010 police-military operations in the west Kingston community, causing her to gather her family, including a six-month-old infant, and seek refuge elsewhere.

She said that was the last time she saw her husband and son alive.

Joan Haughton Allison told the West Kingston Commission of Enquiry that just over a week later, she identified the bodies of her husband, Kirk, and 20-year-old son, Dashard Page, on a computer screen at the Tivoli Gardens community centre while scrolling through the list of persons who died during the operations.

"You ever found out how they came to die ... from the pathologist or anybody?" commission Chairman Sir David Simmons questioned.

"Just by the post-mortem. They said they got gunshot," Allison replied.

She said her ordeal began shortly after midday as she was about to prepare a meal for her family.

"I heard a big explosion - a bomb - and I feel the building shake ... like an earthquake," Allison recalled.

She said the sound left her family terrified.

"Kirk ran inside, covered his ears, and was crying for his ears ... . The baby [was] screaming - everybody screaming and crying," she recalled.

"Did you and your family do anything after you heard this bomb?" asked senior legal counsel to the commission Garth McBean as he led her through her evidence.

"I picked up the baby, went to the drawer, and got some cotton to stuff the baby ears to kinda cool him down with the crying, and then we said, 'Let us go downstairs' because the building seemed like it was gonna come down," Allison replied.

She said they ended up inside a neighbour's home, but the sound of heavy gunfire and more 'bombs' did little to ease their fears.

"We thought we were going to die," she said.

Allison testified that shortly afterwards, a group of soldiers who had been searching a townhouse owned by then fugitive Christopher 'Dudus' Coke began taking up positions on top of several buildings in the community.

However, Allison said a group of masked soldiers, along with one member of the Jamaica Constabulary Force, soon kicked open the door to the apartment where she and her family had sought refuge and pointed weapons at them.

She testified that they were ordered from the house and taken, along with other residents, to an open area near the community centre, where the men were separated from women, children, and the elderly.

With her six-month-old child in her arms, Allison said she was allowed to return to her neighbour's home, leaving her husband, son, and daughters.

"Did you see your husband and son again?" McBean asked.

The West Kingston Commission of Enquiry is probing the conduct of the operations, which were aimed at capturing Coke. More than 70 civilians and one member of the Jamaica Defence Force died during the operations.

The hearings continue today with two other Tivoli Gardens residents slated to give evidence.