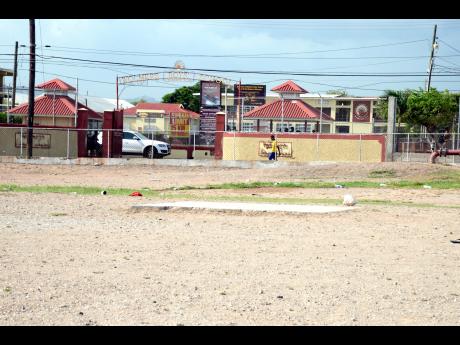 A section of the northern end of the National Heroes Park where dust emanates and is dumped on Wolmer's Boys' School.

A SECURITY guard at the Wolmer's Boys' School in Kingston, who was wearing a dust mask to protect himself from the heavy dust particles, coming from the Heroes Park, sent a strong signal that the ongoing drought conditions, could pose serious threats to the lives of students and residents of the surrounding community.

One concerned citizen who spoke to our news team, noted that the situation is a worrying one, which needs urgent attention.

"The relevant persons need to do better about that dust bowl hazard across from Wolmer's Boys' (school). The dust engulfs and comes over into the school in the afternoon gusty winds. It's blinding the boys, creates respiratory issues, aggravates acne, makes the classrooms dusty, even the simple task of talking is affected because dust goes in their mouths. They need a water truck to sprinkle the place by afternoon."

Dr Walton Small principal of the school however noted that he has not had any complaints of students' health being threatened as a result of the dust, but pointed out that the situation has been a problem since the last academic year.

"We have not had any incidents of the students having respiratory problems but we have had to give our security guards dust masks and persons who work on the outside are having difficulties because the dust is very bad," he said.

"The dust is a nuisance and we are aware of the serious consequences that come with it. We are also aware that we are having some serious drought conditions and as a result of that the place is very dry. We however would not want this to get out of hand and we would recommend that the area gets water consistently," Small told The Gleaner.

The country has been experiencing what experts have described as the worst drought conditions.